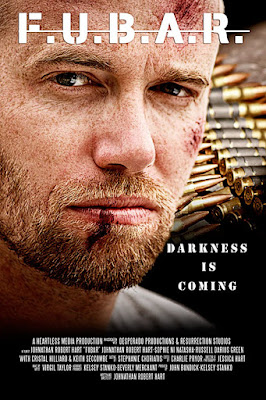 “If I have only five words left just before I die,

FUBAR would be my choice!”--Dean Murdoch.

for this entire fucking planet is marching

and sliding straight into Hell.

I shit you not.

The Retrumplicans are counting cadence.

Later this month, the Trump-appointed

will strike down Roe V. Wade,

with the relish the cops

as women’s freedom will backslide 50 years.

in front of an audience of billions.

Will Smith has volunteered for the deed.

we have had more mass-shootings

than days of the years.

Fat cat senators are getting NRA-rich

are getting blasted into dog food.

If this were a factory, we

Some Americans have gone there

to fight for democracy.

and Biden cowers beneath the threat.

I would drop out of the angry sky

and tear Putin’s head off.

Christ, if only the rumors

of Putin’s cancer were true.

Thanks in part to Putin,

a gallon and rising. Now it costs

truck drivers a dollar a mile

to deliver goods; no wonder

babies are dying for lack of formula,

while Trump is searching for whores

to piss on him, as he composes love-

rots the kidneys out of democracy.

I tell you the new female Admiral

Head of the Coast Guard will turn out

to be a dyke, and all vessels will fly

the LGBTQ colors. Occam’s razor has been

up to my neck in fire ants, and all of them

want to hurt me. Other than that,

things are pretty fucked up.

Posted by Glenn Buttkus at 1:30 PM

I haven't read a truthful, terrifying, all-encompassing rant like this in FOREVER. Every word speaks the truth. Bravo, Glenn .. Bravo.

Will we ever learn? I guess not. I hope you are doing well as it hurts to have fire ants in one's neck.

No end to it and no sense in it either. Beyond madness this hell we have created.

Sounds reasonable as an interpretation, what you say. And the rest of the planet you don't mention isn't doing too well either.

Yep, the dumbing down of America. Loved your rant!

All this, and just one day in the news. Well encasulated.

Damn this poem is on fire!! You really nailed it with "Glaciers are calving like a berserk assembly line, while GOP voter suppression rots the kidneys out of democracy,".. so sorry to hear about your health.. hope you feel better soon ❤️

you had me at f

So much dissonance in the world... and if I could I would love to turn my back on everything... Fubar sums it up

There is something immensely satisfying about reading hard-hitting gritty poetry like this.It heals. Great lines, and I did like the Will Smith line..he deserves it.