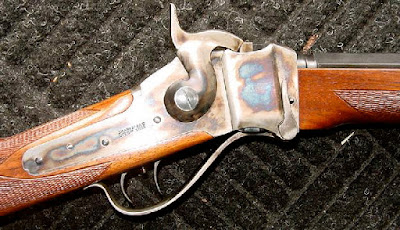 “Thanks for the very positive response to this review of my
saga, a poetic screenplay series. When a project spreads
out over several years, it requires special scrutiny; just saying.”
--Glenn

Eleven: Elegy--Buck is recalling his mother’s funeral as he stands in
his family cemetery staring at the three headstones--his mother,
Sarah Elizabeth Buck, in the middle--his father, William Tyler Buck,
on the right--& his little brother, Jackson Issac Buck, on the left. He
noticed that someone had put flowers in fruit jars in front of each of
them. He talked quietly with his departed ones, announcing that he
had come back for good this time. Then, arms open wide, he announ-
ced to the air, “Hey, all you sons of bitches--I’m home.”

Twelve: Provisions--Detailed introduction to Wallace’s General Store,
with the aged storekeeper bustling about filling that morning’s orders.
Buck entered & gave him a grocery & provisions list. Wallace said he
would get to it in an hour, or so, offering him biscuits & gravy while he
waited. Buck said that what he needed was a stiff drink & a woman.
Wallace sent him across the street to Bronson’s CHINA DOLL saloon.

Thirteen: Gates of Gomorrah--Buck carefully crossed the wide street,
booming with mid-morning traffic, as a bright red & yellow stagecoach
rolled by with BRONSON STAGE LINES stenciled on the doors. He
entered the saloon, followed by Cheewa, his dog. There is a description
of the large ornate saloon. A bearded guard said, “Hey, get that fucking
mutt out of here!” Buck complied, but he flashed an angry look at the
guard as he made his way to the bar.

Fourteen: Bartering--Buck notice three saloon angels at a table as he
passed by. He gets to the bar & orders a short beer. They all preen for
him as h sips it. A plump redhead with a pretty face, Millie, approaches
him. They move to a table, where he buys her a “breakfast drink”. She
informs him that she will take the ride for five bucks, “You get me & a
bottle.” They head upstairs & no one takes any notice. On the sound-
track we hear a coronet playing the Deguello.

Fifteen: Prelude--Millie’s room is tidy & clean. She has two teddy bears
on the bed, that she puts in a basket. Buck opens the red curtain & slides
up the tall window. He unbuckles his wide gun belt, & places it on a chair,
where it coils up like a serpent. She is now naked, pretending to want
his attentions. His mind wanders, thinking about a white buckskin teepee
by a gurgling creek, & a young raven-haired maiden’s laughter.

Sixteen: Cathouse--Daydreaming about a Comanche maiden, his eyes clear
& he focuses on Millie, with her Rubenesque charms, but beauty & grace
were replaced with bloat & bovinity. Buck asked her if she had ever made love
outside, “with a butterfly on your butt?” She talks about her farm girl youth,
followed by a “classy” sex scene, as we hear their coital bliss, but the camera
pans slowly around the room. Cut to a white bull bison standing on a ridge
above town, who bellows. Buck looks up as if he heard it, then stands in the
open window. He sees a cat on the roof. He said, “Cats are not very good to
eat, even if you’re hungry.”.

Seventeen: Samaritan--Suddenly the room shakes as something hits the wall
in the adjoining room. Millie said, “Not that bastard again.” Buck, wearing only
his breechclout rushes into the hallway. He hears screams coming from the
room. He kicks the door open. A gambler is choking a blond whore, with his
belt around her neck. Buck intervenes, & the man pulls a small hide-out
pistol. It discharges as Buck slaps it out of his hand. Buck is slapping the
gambler around, when the coward pulls a knife. Buck disarms him, then picks
him up onto his shoulders, spins around, & tosses the man out through the
closed window, out onto the roof, where he rolls across it, & falls off the edge.

Eighteen: Pursuit--Buck returns to Millie’s room & buckles on his gun belt, &
strides down the staircase, barefoot & bellicose. He charges through the
saloon, knocking some chairs over before he gains the door--no one attempted
to stop him. Reaching the street, he looked both directions--but no gambler.
Some people were noticing his near-nakedness. Then he saw a cloud of dust
rising out of the alley, with Cheewa barking & running circles in front of it. He
moved to the alley, finding it empty except for splintered wood & broken glass.
A small crowd had gathered. “Anyone happen to see where that son of bitch
made off to?” No one replied, so he walked back up to the saloon entrance.

Nineteen: Treachery--People cursed him as he made his way to the stairs,
which he ascended two at a time; but the bully guard was on the first landing
holding a shotgun on him. The blond whore “victim” stood behind him,
screeching obscenities. The guard accused him of assaulting one of their
best customers. The prostitute hollered that Buck might have killed, “My
Paully”. Then she attacked him, pummeling him with harmless fists. He did
not defend himself, just kept watching the guard. Finally he tired of her tirade
& punched her in the face, while drawing his Colt .41 with the other hand.
We hear two pistol shots & a shotgun blast as the camera shows us the
whore passing out.

Twenty: Self-Defense--The prostitute was out cold, & Buck had shot the
guard in the hand. Holstering the Thunderer, he tried to push past the
guard, but the obstinate bully jumped him. Buck punched him to his
knees, where he said through bloody lips, “You’d better finish it, Buff--
you’re a dead man already.’’  Buck smacked him over the head with
the heavy Colt barrel--but the tough guard still wanted to fight, so
Buck obliged him, beating him senseless. Standing up he faced down
a younger guard & twenty men at the foot of the stairs. The guard
lowered his weapon, & Buck climbed the rest of the way upstairs.

Posted over at dVerse Poets Pub OLN
Posted by Glenn Buttkus at 10:49 AM

Glenn, from what I see here it looks like Blackthorne is winding down? It has been a great and well written journey indeed! What is the next step?

Brilliant series of events - awaiting to see what follows.

Mary, the saga is not winding down, it's revving up. My existentialist novel is 375 pages, & I'm only up to page 67 in my poetic screenplay rewrite of it. I left off at Episode 54, & it will continue in a few weeks. A number of folks come to the series late & have wanted to know what happened earlier, so for those folks, & others, I'm taking the time to do this review, so that when the cinemagenics resume, everybody will have had the chance to get current with the plot; smile.

Thank you for this review and reminder of what has happened. Maybe if you add this link to future submissions so others can catch up? I know all who "jump" into this are intrigued by it and wants to know what has happened. I certainly did! Please don't wait too long to start back up. I count on this for OLN and am always disappointed if it isn't here.

I so enjoy reading this series. Thank you for a wonderful read, Glenn.

here I was hungry as a Spring thrush, palming this piece of sagebrush, a young maid in Montana gave me as a talisman for safe passage up into and through Canada...I remember her saying, "there might be nights you never see a car on the road when walking through western Saskatchewan on your way towards Manitoba, be sure to give thanks to the rain by smiling at all the lakes you walk by..."

keep up the great work sir...

I am so glad you did this for your readers. This part really jumped out at me and I think I can hear the gurgling creek.

His mind wanders, thinking about a white buckskin teepee by a gurgling creek, & a young raven-haired maiden’s laughter.

and this made me smile

Buck asked her if she had ever made love outside, “with a butterfly on your butt?” haha - now that is being one with nature.

Glenn this review is most useful. It provides the continuity that one craves for when coming on in between. Page 67 going on to 375 is certainly a lot going for you.

Hey, I remember these - I think the last I read was around the grave scene. Boy, there was a lot of action afterward I missed. Congratulations on your exciting news and new partner; best of luck in your real life adventures!

sMiLes of Indian
Maiden innocence
vs.. Bar
room
Broads
when men
were men
and women
are stiLL
judged then..;)