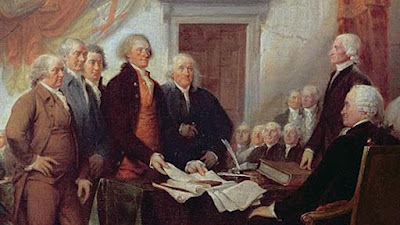 “Those who would expect to reap the benefits of
freedom, must, like men, undergo the fatigue of
supporting it.”--Thomas Paine.

If there is an afterlife,
our founding fathers
must be burning their wigs
over the state of our union.

Gentlemen, I realize
that you were not demi-gods, icons
or devils--you were actual men,
with all the weaknesses and foibles
integral to that species.

First off, it is very evident
that Dolly Madison, Abigail Adams, and
Mercy Otis Warren were helpful
in the shaping of our Republic, yet
history has been mute regarding these women.
Why is that?

James Madison: Are you serious, sir? It would
not have been prudent to acknowledge their
distaff contributions.

Alright, let’s talk about slavery. Most of you
owned slaves. Though you had
an opportunity to do so, you chose
not to deal with the issue of slavery.
Why not?

Thomas Jefferson: Sir, we had the wolf by the
ears. We could not subdue him, nor could we
afford to let him go. In addition, we could not
imagine that the thousands of slaves from our
day would mushroom to millions, nor could we
have envisioned your present day civil rights
issues.

OK, what about the Indians? The Native
Americans were here first. I think you
clearly saw the crux of future conflicts
with the indigenous populations, yet
you made no provisions for dealing
with this obvious future problem.

George Washington: Actually I did make an
attempt to deal with this, planning on creating
sovereign reservations for their tribes, but
Hamilton had to remind me that we lacked
the resources to implement these plans.

Of course in fact, they were ignorant
savages, who were resisting inevitable
progress.

George Washington: Yes, there was that
to consider as well.

Benjamin Franklin: But would you agree
that our achievements outweighed our
failures?

Alexander Hamilton: As Emerson noted, anyone
who compares themselves to us, must realize
that we had the advantage of “being present at
the creation.”

John Adams: It’s been stimulating having this
conversation with you. We have to do it again
sometime.

Posted over at dVerse Poets Pub
Posted by Glenn Buttkus at 2:20 PM

I would expect you, an old board treader, to ace this prompt, and you did. Well done.

Most excellent and wise, Glenn. I'd like to listen/read in on more of those conversations. It's a great format.

American political history baffles me, Glenn. Your poems help me straighten out the confusion. O

Nice description of them "burning their wigs".

This is the third time I’ve tried to leave a comment here. I think your old white men are pissed at me. I love your imagination, as this style reminds me of Peter Kreeft’s books. But I still don’t understand their deflecting responses. It’s like listening to a Christian wriggle his way out of actually feeding the hungry or loving his neighbor. Kinda leaves us all confused with too much ambiguity in meaning and hypocrisy of character. But way to rise to the challenge, Glenn!

I wonder if they had this much wisdom... wasn't the main purpose to get rid of the king and lords of Britain?

Why should the care about savages at all? Except maybe to put them away somewhere.