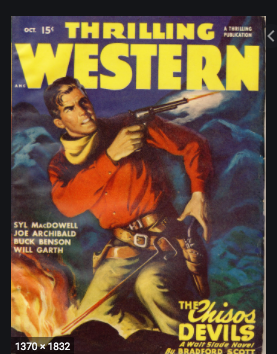 “If you want to know who your friends are, get

yourself a jail sentence.”--Charles Bukowski.

and the great steel door slammed.

3(sound cue) the clash of steel echoed across

against the adobe wall behind the desk, resting

against the gun rack

5(two-shot) Buck: Is it actually necessary for me to

Buck: You got a plan?

that you blew up my original idea. If we could  have

met with Bronson, with the whole town watching, we

Buck: That’s down the crapper.

Hop: No shit. I should have kept you on a leash.

Buck: Bronson would have cut it.

Hop: You didn’t have to go into the CHINA DOLL

with that Indian and pull on the whole crowd.

Buck: Do you understand that I didn’t have a choice?

I was after Ramos. He walked into the cantina and shot

Hop: Even more of a reason to have waited for me.

Buck: In the blood of the moment, that’s not the way

Hop: shaking his head, That’s why you find yourself

incarcerated. You given me a lot to sort out.

Buck: after a pause: Tell me something, Joe--why

were you with Bronson?

Hop: No mystery there. We both arrived at the same

time, and stood there until the gunfire died down.

Buck: I’d be obliged if you tell me where you stand.

Are you Bronson’s shill?

Hop: Christ, does it look like it? I’m standing between

you two, upholding the rule of law. He smiled, his teeth

white but irregular. He jerked his thumb toward the

small cell in the corner. Buck remained seated, and

he began to move slightly toward the Sheriff,

pointing iron at me. He still was not moving.

Hop: anger now in his voice. Pardner, I don’t care

about your feelings. This time you’re going to do what

I’m telling you, no margin for error. Get your butt into

Buck: tense as a coiled spring: I could overpower you.

Hop, still smiling: You wouldn’t live through the

Buck stood up, then smiled: I was just fucking with you.

He walked toward the iron bars, his face still red, and

then stood in front of the small cell.

Buck pushed the barred door open with the toe of his

boot, and stepped into the cell. A plank bed hung from

chains on the mud wall. The bedding was clean. The

floor smelled of soap. He sat on the bunk, with his broad

back against the wall, staring at the Sheriff. The cell door

was left wide open. Hop rolled himself a smoke.

8(close-up) Buck: Seems to me, you’re leaving a lot

Buck: I don’t think Bronson will wait a week for

the judge. He’ll crack this jail like an axe on a coffee

can He’s still got a dozen guns.

Hop: You let me worry about that. I am not giving

Buck: When the nut-cutting commences, let me have

a gun. I promise not to try and escape.

Hop: I won’t be doing that.

Buck: Why in hell not?

Hop: It wouldn’t be prudent, and besides being illegal,

it would make me look weak.

Buck: Weak is better than dead.

Posted by Glenn Buttkus at 2:16 PM

Oh Glenn! You put Buck behind bars! Knowing how much he hates being told what to do, I was surprised when the Sherriff told him the cell was open and to make himself to home – maybe Hop’s not so bad after all.

I just wonder what will happen here... I expect that Bronson is going into a trap... with Buck being the lure. Hop is a sly man.

I just left the opening scene of Rio Bravo to come and read this! Westerns were so big - what happened? When I watched the Magnificent Seven with my (then) 14 year old, he said "Oh, he's doing a Han Solo". I nearly wept.

Loved the exchange between Buck and Hop. I suspect both of them are upto something .. there is a scheme hatching in their minds. The only question is, will they be allies or turn against?💝

I too suspect much has been left unsaid on both sides...

Goodness gracious! I'll have to read this again...

It's about time we got back to the story. We've been waiting in limbo for awhile! A huge intersection is developing here, so many lifelines and possibilities. I really like the dialogue you laid out today, Glenn. Buck's taking a big chance by letting Hop jail him. Buck is the hero the hero is always right, but Hop is right that Buck gave him no choice. I also agree that Hop has a plan in place to keep Buck safe until the judge can get there. I want to know how Johnny is doing and his new sweetheart and her dad. There have to be other townsfolk that are sick of Bronson and his gang's dominance.

Interesting chapter Glenn. Have to see to what happens next.