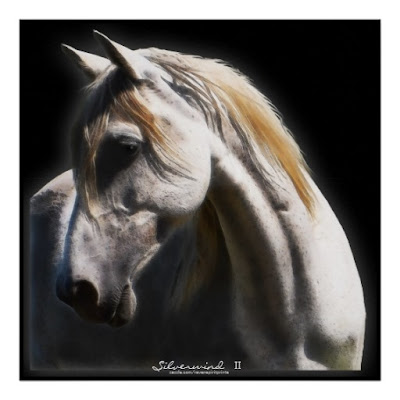 “It is a great art to saunter.”--Henry David Thoreau.

1(close-up) Rod Buck: Have a drink with me, Fiero.
2(close-up) The Eagle nodded once.
3(sound cue) violin & harmonica.
4(medium wide shot) They walked together across the street; others
were milling around, seemingly oblivious to their little scenario.
5(two shot) Their backs to the camera as they walked toward two horses
wrap-reined to a hitching rail.
6(reverse shot) as they approached the horses, a muscular white stallion,
wearing a soft Indian bridle & a vaquero silver saddle, & Buck’s big Red tied
up taller alongside it. Under the roan, Cheewa sat on his dark haunches, pink
tongue panting, watching the men with coal-black eyes.
7(two-shot) angle on the Eagle over Buck’s shoulder:
--Johnny: Rod Buck, do you belong in Negro-Espina?
8(medium close-up) Buck gazing down the long street:
--I was born here.
--Johnny: Then you are the one.
--Buck: The one?
9(sound cue) crows cawing over a clarinet riff.
10(close-up) the Eagle: The one that Bill Buck used to talk about; the absent
surviving son gone off angry to slay los buf’alo.
11(two-shot) angle on Buck over the Indian’s shoulder:
--Then you did know my father?
12(tight close up) Johnny: I buried him.
13(medium two-shot) there is a small silence as Buck studies the white stallion,
& the Eagle studies Buck.
14(sound cue) sweet piano chords.
--Buck: El Blanco--he’s yours?
--Johnny: Yes, this is my Jesus
15(medium close-up) Buck laughing, his eyes shining.
16(two-shot) angle on the Eagle:
--Yeah, why give him an Indian name? He is just Jesus. I liberated him from
some Bandidos down Mexico way.
--Buck: There can be great beauty in some Indian names.
17(sound cue) Indian branch flute twill.
18(two-shot) angle on Johnny: For some men there can be great beauty in
buffalo chips. Both men laughed in masculine harmony.
--Is this your dog?
--Buck: Cheewa.
--Johnny: The black puma. Yes--a good companion, a dog. I prefer
a woman. Now--about that drink...
19(wide shot) The China Doll was a few doors down from them.
20(sound cue) saloon piano & fiddle.
21(close-up) Buck: Forget Bronson’s pussy wallow. I am not welcome
there today.
22(two-shot) angle on Johnny: Piss on the China Doll. I only take money
from Bronson--I don’t give it back to him. I only drink whiskey at Pedro’s.
Do you know it?
--Buck: The Cantina?
--Johnny: The very one, my home. I sleep in a back room when in town.
23(medium wide shot) Ranch work wagons, carriages, & horsemen on
the move, as a bustling speeding stage coach rolled past them with
BRONSON STAGE LINES stenciled red on the doors. Johnny untied his
magnificent White & began sauntering South. Buck followed him with his
Roan. Cheewa trotted quietly after them.
24(tracking shot) The five of them padded along in white dust, while rocking
chairs, window hinges, & gouty joints creaked as many eyes followed them
moving along the busy talcum avenue in the ochre afternoon. They halted at
a wide crooked hitching rail in front of Pedro’s cantina.
25(two-shot) they wrap-reined their handsome studs. The Indian stretched
his big arms, yawned, patting his abs & said softly:
--They watch us.
26(medium close-up) Buck, glancing back up the street.
--Fuck ‘em.
27(two-shot) Buck cracked his knuckles, chewed at his ample lower lip
& nodded back toward the auction office.
28(angle on) the Eagle: For sure, gordo Red Face will run to Bronson--but
it is of no matter. Come, Meet Mateo.
29(sound cue) Spanish guitar chords & tambourine.

Would you like to listen to me reciting this Cinemagenic Poem?

Wow Glenn - First the picture is absolutely beautiful and what an interesting name to give a horse..a horse is an amazing companion and I guess it could be a savior in many ways. A black puma again strong symbolism here..my mind is whirling and there are some beautiful indian names...There is a some hidden depth in the conversation between the men..the whole scene just played out in my head. Timely insert of the crows cawing..as they speak of his father a symbolism of death and darkness. The scene ends perfectly with the guitar chords & tambourine. You are def a master storyteller. I enjoy these so much..I want to see it on the screen..

Pretty Sure Bronson already knows what is coming. Ha. Interesting connection now too, him being the one that bburied his father. I agree, some nice symbolism in this one again, in the fine details.

Glenn, did you know there is a film on Netflix called "Blackthorne"? Interesting script. Smiles...>KB

Actually, the film is BLACKTHORN, a Western with Sam Shepard; a damn good one, a movie about the elder Butch Cassidy, still exiled in Bolivia. My manuscript, BLACKTHORNE, that I am basing these poems on, was finished, albeit unpublished, in 1970.

Excellent details. I so enjoy this story and hope someday. to see it onscreen.

see - what i always love most about your stories is that there is always music mixed into it...

"Yes, this is my Jesus."
Best line ever. One question, is it "Hey Zeus" or "Geez Us?"
This was a rich read, Glenn. I sometimes have to strech my brain to read it as poem, because it is dialogue with stage directions, but I imagine that the Greek drama tragedies and epic poems were very similar, and thinking of Blackthorne like that helps me.

Johnny pronounces it Hey-Zues, for sure, as Spanish has found its way into his speak. I appreciate your issue with my calling this style "Cinemagenic Poetry", a form I mostly invented. Other poets here & there have toyed with the notion, but I have corralled it, honed it, & branded it as my own. It is beyond a prose poem, beyond a film screenplay, it is a poetic butterfly no one has ever caught before, drove a pin through, or named.

Glenn, did I ever tell you that you are a master of words and imagination?

Well, my friend - you are. This poem needs to be heard from around the world and the universe itself. Beautiful as always...you write like a screen-writer and a film director.

p.s Check out my new poem I posted yesterday evening...You will step into an odyssey
I tore the very fabric of our reality.

You have surpassed yourself with this segment, Glenn! I could picture the entire scene.

This completely blew me away! Awesome :D

I think Glenn - that what you left unsaid here - allowed the mind to fill in the scene with perfect clarity - nice.

Such an interesting style.. should I be starting at the beginning somewhere and connect all your poems to get the entire story? The scene was quite vivid by itself too!

Yeah, thotpurge, there are 41 prior episodes that stretch back in my archives over a year & a half; check them out, a few a time so that you don't get overloaded.

your right... there is music... amazing how we take some things for granted

There is so much going on in this that it really did help to hear it through your words/pace. Another great scene, Glenn.

Beautiful picture here! For a moment I thought this was about the movie and then realized this is your work. Detailing was fabulous but I think I will have to do some major sieving to connect all the dots.

Crafting the moment with words. Excellent.

Ugh, I have to get my nachos when visiting... smiles. You paint scenes with words like a master.

Your recital only adds to this rich piece of work. Wow, what a delight! Thank your sharing.

Of Dogs and Women
of Jesus and Stallions
all do bleed
all do live..
some
wild
and
some
crucified..
i will to Just Ride..
and yes.. women are
my favorite too.. they
are my Jesus aSwell..
yes.. particularly
my wife..

I RIDE..
The wife does
not Ride and
that is okay too..
she loves Jesus
and i love
Jesus too..
what's left
of
him
any
way..:)

Glenn...your poems are like epic sagas that play on the big screen of our imaginations. So vivid!!

The cumulative effect of these details, leaves a very strong and tangible sense impression. The characters and the environment take form before our eyes and ears, as it were. Very well done.
Steve K.

Nice to see Buck and Johnny coming together.. I hope there is the next installment today.