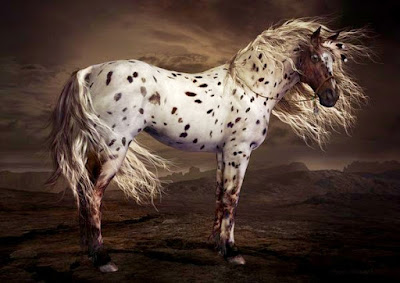 “No love, no friendship can cross the path of our destiny
without leaving some mark on it.”--Anais Nin

1(two-shot) angle on Johnny: Yeah, Bronson is the one-eyed king
in these parts, but you & the ranch check his power.
2(reverse shot) over the Eagle’s shoulder:
--Buck: You do not care about the danger?
--Johnny: Danger? Shit, it has always been our companion. Do we
ever see the scorpion in our boot? No, thats why we shake them
out every morning. No, what I care about is horses, women, & fishing.
--Buck: There is a small lake on the north meadow.
3(sound cue) water lapping & lune laughing.
4(close-up) Johnny: I know, I used to fish it with your father, catching
fat trout, drinking mescal, & talking about you, & those who were
gone; you know, your mother & brother.
5(close-up) Buck: Christ, I almost drown in that puddle, teaching myself
to swim.
6(two-shot) angle on Johnny: Your father used to call that lake, Sarah’s
Pond, the place of tears.
--Buck, with a sad smile: He became very sentimental as the place fell
down all around him.
--Johnny: Bronson has been using that lake for watering his herds. If
you try to stop him, that water will writhe with blood.
7(sound cue) coronet & harmonica.
8(medium close-up) Buck: Maybe not, maybe King Bronson will parlay
& pay me for that water.
9(two-shot) angle on Johnny: Good plan--& hey, you are doing a fine
job making a positive impression on El Hefe bendejo.
--Buck laughed: Too true, brother, too true.
--Johnny: How will you share the water after you build your own herd?
--Buck: Yes, let’s talk about my horses.

1(shift to a wide-shot from overhead drone). A huge Appaloosa stood
as solitary sentinel on a hillock, the wind ruffling his mane. He was a
magnificent stallion, twenty hands high, bulging forearms, a thick neck
& broad shoulders. His left ear was Nez Pierce split.
2(sound cue) gunshots & horse’s hooves.
3(close-up) The stallion’s eyes.
4(cut to wide-shot, flash back) a sea of grass, empty frame.
5(sound cue) guitar strumming chords & tom-tom thumping.
6 Horse & rider enter the right side of the frame, an Appaloosa
with an Indian brave on its back, running in a fantastic lunging
gallop.
7(cut to medium-shot) in slow motion dollying toward the pair.
Crying Wolf wore a short-waisted blue cavalry jacket & leather
leggings, with black & red war paint on his face, & the stallion
had two red bellicose hand prints painted on its muscular withers.
8(cut back to wide-shot) at normal speed, with the Indian galloping
toward the left of the frame as a squad of cavalry troopers ride in
on the right, firing their Spencer rifles & Colts as they pursued
them.
9(sound cue) a volley of gunshots, their echo cracking across the
screen from one Dolby speaker to the other.
10(cut to overhead drone shot) with the troopers in the foreground
& the Indian pulling away from them a hundred yards in the distance.
11( cut to a stationary shot) the Appaloosa & rider gallop toward
the lens, passing it, as they dropped out of the frame, with the blue-
coated troopers riding hard on their heels.
12(sound cue) another volley of gunshots.
13(close-up) two bullets hitting the Indian brave in the back, slumping
him forward. He straightened up just as a rifle shot hit him in the head.
There were two bloody gashes in the horse flanks from the rain of
lead. The Indian let go of the mane, flinging his arms in the air.
14(sound cue) Crying Wolf’s war whoop.
15(medium close-up) The brave was flung off the fleeing horse’s
broad flecked back, hurling through the air before colliding with the
ground, his life shot away.
16(medium wide shot) as the troopers reined up, with a couple of them
continuing to sling lead at the riderless steed.
17(medium close-up) the great stallion was galloping, pouring on the speed,
leaping like a bull elk, rushing out of that field of death with bullets chewing
up the ground near his flashing hooves, their thunderous ricochets pounding
in his velvet ears.
18(sound cue) seed rattle, saxophone, & castanets.

Posted by Glenn Buttkus at 9:58 AM

OK, first. The one eyed king. Made me think of the one-eyed snake. So he is a Dick. Ha.

Nice shot changes in the second shot. As I watched it play out in my mind it was interesting shifts in perspective. Of course the army will most likely side with Bronson. Especially considering history.

I felt moved into that image of the horses.. it was like being moved into a painting, a dream of sorts... There is hope in the air.

oh..
YES..
Wild
Indian
Stallions
refusing to
BREAK... the
price is often
death.. oh no..
domesticated
humans always
playing by rules
the price is often
death AS LIFE.. i
FOR ONE at least now..
but perhaps no before
WiLL die Free without whim
of disappointment knowing
and FEELING WITH A GRIN AS
WIDE AS INFINITY THAT YES.. i
livedevil or NOT.. sMILES GLENN...
Oh to come here and FEEL
wild
and
free
again..
PRICELESS..:)

I love this. I felt pulled into the scene. I could listen to you read all day ^_^

Such a wonderful write :D Love that quote!!

I have always liked the detailing you create in your cinemagenic forms and here the introduction was fun and lovable.

I like how you frame your poems as scenes. I also listened to you as well and your passion for this kind of writing is infectious. One of my favorite lines was about the scorpions being in the boot.

Love your work here my friend.

P.S I got another poem up. This time its a Disney propaganda poem. :)

Such a cool format. And the scene with the horse is just magic. Great writing.

Also, nothing to do with the writing, but cool banner. Batman's always good.

I just had to come by as I knew for open link you would have another installment. I can see the scene so vividly in my mind. The opening scene sets a dream like pace and then it quickly takes a twist. Some wild spirits cannot be tamed. I could feel the shower of bullets. It seems you always know exactly where to insert the right instruments the sound that carries the viewer/reader into the adventure. Always interesting Glenn..Now, I will go listen to your read your scene.

Reading this makes me wonder if you had a career in movie making or at least as a cameraman. I've read this style of yours before and it's so much fun and entertaining. That last scene with the horse was so powerful. I just hope that no animals were hurt in the making of these scenes... ;)

Actually I had a career first as an Actor, then a teacher, but always a poet & a movie buff who has a 30,000 DVD collection. Thank for noticing the authenticity of my poetic vision.

I don't know why, but scenes with horses always get to me, especially when the horses are harmed or protecting their rider. They are such intelligent, loyal creatures, and you capture so well their majesty and poise, as well as their movement:
the great stallion was galloping, pouring on the speed,
leaping like a bull elk, rushing out of that field of death with bullets chewing
up the ground near his flashing hooves...

I enjoyed it, as always.

The horse is a totem of power...well-described in this. Like Marina, I have a great love for horses and the image you chose is such a perfect lead-in to this power-full scene. I'm fortunate to live on the edge of town and just across from us I get to visit horses.

Have to say I thoroughly enjoyed your reading of this, especially the older voice of Johnny and just the right intonations to keep a ie radio listener on the edge of his 1940's chair. Most girls go through the horses stage so that was impressive....love the ending lines of this as well. Bravo!

Good piece from beginning and a great ending with the stallion leaping out.