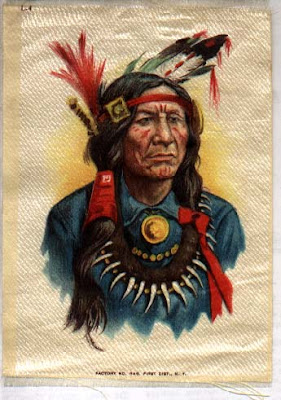 Father coming home from work. Me, waiting on the front steps,
watching him walk slowly and carefully, like half a real Indian.
The other half stumbling, carrying the black metal lunch box,
with maybe half a sandwich, maybe the first drink of good coffee
out of the thermos, maybe the last bite of a dream.

Father coming home from work five days a week. Me, waiting
every day until the day he doesn't come walking home, because
he cut his knee in half with a chainsaw.

Me, visiting my father laying in bed in he hospital in Spokane.
Both of us, watching the color television until my mother
comes from shopping at Goodwill or Salvation Army, until
the nurses come in telling us we have to go.

Father coming home from the hospital in a wheelchair. Me,
waiting for him to stand up and teach me how to shoot
free throws.

Me, running up to him one day and jumping hard into his
lap, forgetting about his knee. Father holding me tight
against his chest, dark and muddy, squeezing his pain
into my thin ribs, his eyes staying clear.

Father coming home from the mailbox, exercising his knee
again and again. Me, looking up from the floor as he's
shaking his head because there is no check, no tiny
miracles coming in the mail.

Father bouncing the basketball, shooting lay-in after
lay-in, working the knee until it bleeds along the scar.

Father crying from the pain late at night, watching
television.

Me, pretending to be asleep. All of us listening to
canned laughter.

Father coming home from another job interview, limping
only a little but more than enough to keep hearing no,
no, no.

Me, eating potatoes again in the kitchen, my mother's
face growing darker and darker by halves. One half still
mostly beautiful, still mostly Indian, the other half
something all-crazy and all-hungry.

Me, waking her up in the middle of the night, telling
her my stomach is empty. Her throwing me outside in
my underwear and locking the door. Me, trying anything
to get back in.

Father coming home from drinking, after being gone for
weeks. Me, following him around all the time. Him,
never leaving my sight, going into the bathroom.

Me, sitting outside the door, waiting, knocking on
the wood every few seconds, asking him, "Are you
there? Are you still there?"

Father coming home finally from a part-time job.
Driving a water truck for the BIA.

Me, waiting on the front steps, watching him come
home early every day.

Him, telling my mother when they think I can't hear,
he doesn't know if he's strong enough.

Father telling mother he was driving the truck down
Little Falls Hill, trying to downshift, but his
knee was not strong enough to keep holding the
clutch in.

Me, holding my breath.
Him, driving around the corner on two wheels,
tons and tons of water, half-insane.
Me, closing my eyes.
Him, balancing, always ready to fall.
Me, holding onto father
with all my strength.


Sherman Alexie...........from The Business of Fancydancing
Posted by Glenn Buttkus at 9:07 AM

Whoa almost too much info but I guess the best poems are.

Dude, Burt Lancaster gave my grandmother a dozen roses and sang her "Let Me Call You Sweetheart," just before she drew her last breath, on the Hawaiin shore.