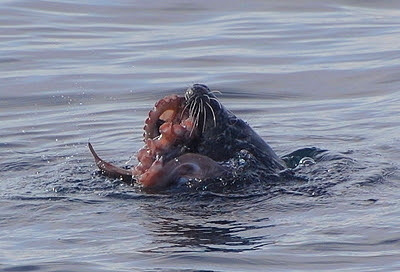 I’m stunned by the feeding frenzies
that take place every day in front of me.
I’ve seen large, whole, live
orange Dungeness crabs haplessly
carried through the air by
a single tad-too-slow crustacean leg
clamped in the beak of a lucky seagull,
as both creatures in turn
were closely chased
by a multitude of frantic,
ravenous sea birds and hawks.

And a most indelible moment
just a few weeks ago:
the sight of a bald eagle flying low
and straight-on toward my desk,
with a thick, pink, three-foot long
octopus tentacle dangling down
from its massive yellow talons,
limply gliding through the air,
looking something like a mid-air
refueling effort gone terribly wrong.
A flock of gulls screamed as they raced
to snatch stretchy bites of this
fly-through fast food offering,
but the eagle out paced them.
This time.