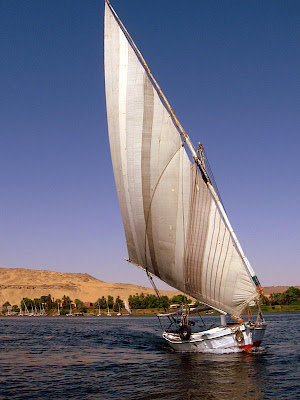 
The short plump receptionist at the Venus Hotel in Luxor, Egypt insisted that the street noise completely died down at 10. He tugged at the brim of his NYPD baseball cap and eyed me up and down.

Staring into the darkness, wide awake at 2am, the scream of cars, motorbikes and trucks winding their way in front of the hotel was not exactly a lullaby. And for reasons only known to the drivers, a cacophony of horn blaring was also part of the late night serenade. At about 3am I fell into a blessedly needed sleep only to be roused at 5am by the screaming of the muezzin from the mosque next door inviting the reverent to prayer.

We had come to Egypt post-revolution to support the brave souls who had struggled so valiantly and non-violently for democracy. We would spend a little money in this now non-touristed country and I hoped to be able to write several articles when I returned to my home in Istanbul encouraging all who had ever wanted to visit Egypt to do so now.

After breakfast at the hotel we made our way through the souk to the Nubian Coffee House. Enroute every man in front of every stall barraged us with sales pitches. Pushed shawls into our faces. Kept up a non-stop verbal drone:
“Madame where you from?”
"Madame, you France?”
“Madame, want pyramid?”
“Madame, me best price.”
" Madame, why you no stop?”
"Madame. Madame. Madame."

We sat down at an outside table across from the local oven. Men in long shirt-collared dresses and scarves wrapped around their necks stood in line waiting for the rounds of fragrant fresh bread to be passed out through the open window. From the store next to us the smells of Egyptian musk, amber, and hibiscus wafted over to us.

Having been grossly overcharged for a “Turkish coffee” the day before in Aswan, Daniela and I had vowed to ask the price before ordering. When the sweet young waiter came to take our order we ripped into him.

“How much is it?” we demanded.

“Five pounds,” he stammered recoiling from the onslaught of our aggression.

“With sugar?” we asked, perhaps a bit more forcefully than necessary.

“Okay, sorry,” we apologized somewhat abashed at our response. And left a generous tip trying to make up for our rudeness.

I am not a rude person. Daniela is not a rude person. But something was happening to us. The non-stop assault by touts and hawkers was eroding our normal decorum. Overcharged, taken to places we didn’t want to go, our every step barraged by: “Where you from? Madame come here! You want Felucca? You know how much? Best price. Only 50 Egyptian pounds. Maybe later, okay?” Men following us, talking incessantly into our ears, pushing their faces into ours, blocking our way: “You remember me?” My name Omar, Ahmed, Hamdi, Mohammed, Nassar and even Ziggy. “I wait here, okay?” “You promise, okay?” “You want husband? I have the big one.”

At first we tried to be polite. Walking along the Nile on our first day in Aswan we were happy and relaxed. “No thank you,” we said to the first tout. He kept following. “La shukran,” we tried in Arabic. He continued pitching his felucca. I turned, looked straight into his black eyes, and said firmly: “We took a felucca yesterday. We don’t want to take a felucca again today.” But undeterred he walked alongside us. When he finally dropped off, the next one in a long line of white–robed touts attacked. Lined up along the promenade above the Nile, they looked like roosting egrets waiting to pounce on prey. They followed, mouths to our ears. Over and over repeating prices, promises. Blocking our path: Caleche, Madame? Felucca, Madame? Spices, Madame?
“Pssst!”
“Come here!”
“Madame!”
We tried to ignore them. But like hungry mosquitoes they whined in our ears. Like angry bees they buzzed around our heads.

Then we tried speaking in Turkish. Acting like we didn’t know any English, we stared at them blankly, shook our heads as if not comprehending. Jabbered in Turkish. Undeterred by a language they didn’t know they prattled on in French, Spanish, Italian. Finally, I reached the end of my endurance. I cracked. I, a tiny, sixty-three-year-old, forty-six kilo woman suddenly metamorphosed into Dirty Harry.

The dark-green gowned, dark-skinned Egyptian trailed alongside us unsuspecting. Never realizing that the petite old lady he was hounding was really Dirty Harry.

I turned in front of him and stopped. A woman whose shell had cracked wide open. And emerging from the shell, sprung a fully-formed, and ultimately dangerous Clint Eastwood. My eyes narrowed into slits of pure malice. I had become Dirty Harry.

"I killed my last Felucca driver,” I hissed out between clenched teeth. You want me to kill you? Come on let’s go to your Felucca. Make my day.” I stood before him jaw set, body tensed. I drew my index finger across my throat while staring him down.
“No Madame. Don’t kill me!” he whispered scuttling backwards until he turned and fled in the opposite direction.
It was then that I noticed the look on Daniela’s face.
“You scared me,” she said and then we both started laughing so hard we were bent over, tears rolling down our faces.

I’m normally a mild-mannered woman. A lover of humanity. Compassionate. Empathetic. I understand this is their job. They have families to feed. Bills to pay. I forgive them all.

But when a strange man touches me, blocks my path, lies to me or deceives me, I turn into Dirty Harry. It took Luxor to provoke this transformation.

Then one smiling man shouted “Hello! Welcome!”
We kept walking, ignoring him.
“Welcome Madame!” he sang out again.
We avoided eye contact.
“What’s wrong with you? Why are you so unfriendly? I just welcome you to my country and you can’t even smile or say hello. You are not women!”

We tried to explain. “Because there are so many men who…”
“No,” he insisted. “You are wrong! You can smile. Say hello. You are not women!” He turned and walked away scowling.

And in the end we’re the ones who are made to feel wrong.

We walked along the Corniche. The blue Nile shimmering on our right. The ancient one-sail feluccas gracefully skimming its calm surface, our heads bent in shame, feeling like we’ve failed ourselves, behaved less than admirably.

The massive papyrus columns of Karnak’s Hypostyle support our weight as we lean against them spotlighted in rays of sunlight, reflecting on our journey.
Travel teaches so much. Many of its lessons are unpredictable and unsolicited.
But always, a learning process.

Posted over on her site Diane in Istanbul
Posted by Glenn Buttkus at 6:00 PM