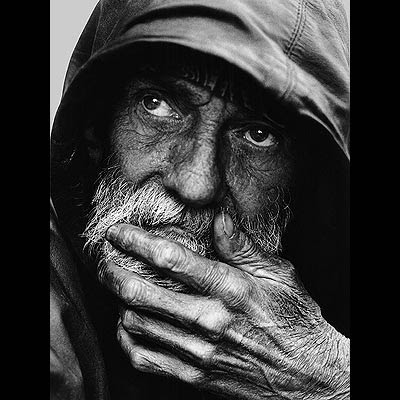 He awakened at first light
as a commuter train rumbled by
on a parallel bridge, and found himself
distracted by the strong fresh oder of feces--
Christ, Billy had taken a shit near his head this morning,
then packed up and boogied, heading for the Mission.

He was lying alone on a steep slant of the riverbank,
knuckles deep into the urine-soaked soft dirt under
the bridge, listening to the river making soft
gurgling noises as it slipped under the
great green girders above him, while
traffic busily pounded and slapped
the bridge deck.

as he sat up and stretched, unclasping his filthy pea coat,
the last remnant of his service to his country. He had a
penchant for real wool, for it could capture the true
essence of the person wearing it, sweetening
the sweat, breathing as he did.

He reached deep into a shirt pocket and pulled out a yellowed
photograph, unfolding it carefully in his dirty fingers and
stared at the image of his ex-wife, in her red bikini,
sitting seductively on a cushioned swing
on the deck of the house he once owned
while inhabiting a fake utopian daydream
that would morph into a dystopian nightmare;

becoming the person in rags he presently resided within--
dysfunctional, divorced, desperate, masterless,
jobless, homeless and hungry, a mock
menace to society, a fringe dweller.

he hoarsely whispered into the hot wind,
habitually embracing his quaint custom
of greeting his past as if it could hear
him, as if someone, somewhere
cared.

he inquired while rolling up his tattered tarter sleeping bag,
and tying it onto the top of his slashed up back pack,
then walking to the edge of the thick vegetation
growing on both sides of the bridge, he urinated
on some blackberry vines that had been heavy
with gray-brown dust, looking like dead
herbarium residents, smiling
as their true green complexions appeared
in the steaming puddles of piss.

“No, honey, you just sleep some more.
I will fix my own breakfast.”

He fished around in the bulging pack and extracted a kid-sized
red box of raisins, and stuffed it into one of his unbuttoned
shirt pockets while pounding the bridge powder off
his clothes, then swung his heavy pack onto his
broad shoulders and walked stiffly out into the
brightness, squinting into the feral face
of that day’s potential.

Would you like to hear the author read this poem to you?
Posted by Glenn Buttkus at 7:23 PM

I won't say I liked it because this kind of sadness, injustice, and squalor typically stays outside my life-bubble. You're trying to put it inside. And that's not very nice. ;)

These are my favorite parts:

"unclasping his filthy pea coat,
the last remnant of his service to his country. He had a
penchant for real wool, for it could capture the true
essence of the person wearing it"

"No, honey, you just sleep some more.
I will fix my own breakfast." ... Perfect. How else are you going to handle the crumblings of life but with humor, particularly at your own expense?

"squinting into the feral face
of that day’s potential." ... Great ending, this final note of sarcasm.

Thank you for writing, Glenn. We missed you last week.

Wow, this is really heart-breaking, Glenn, especially the moments of interaction with his memory. I like the strong image of scent and sound in this piece, so bitter and dismal. The most powerful part, "inhabiting a fake utopian daydream" and than watching it turn.

Your poems continue to pack a punch, Glenn. A story that was so captivating, to say the lease. Heart breaking to say the most. xo

Glenn,
The bastardized Latin title might be reconsidered if you want something akin to In Vino Veritas. The problem is "vagrant" is derivative of some German or French word, according to my dictionary. If Vagrans is the nominative for vagrant, the preposition "In" requires the ablative case, as "Vino" shows it (from Vinum, neuter word for "wine.") Of course in these days of Ignoramus Latinam linguam (We don't know Latin), who cares so long as it looks Latin-ish. It might be In Vagrantibus Veritas, Truth among the Vagrants, or In Vagrantia Veritas, Truth in Vagrancy. That's quite a fragrant open for your poem, but we all might have to get used to such rude awakenings as the political campaigns roll on. --David

damn man...this is really good....love the character you created in this....so much depth too...the picture...talking to his wife still the touch of his service to his country...he is someone i would talk to....

What utterly beautiful storytelling. You're a true natural!

i'm wondering about his story...about what happened that brought him to where he is now...such a well painted character glenn...i feel like i just met him

(glenn...trying for the third time now to type in the captcha code...will give up when it doesn't take it...consider taking it down...?)

Claudia, I thought I had removed that verification impediment. Took it down yet again.

At least that odor was not the smell of napalm in the morning! You certainly seem to have captured this moment with a hundred telling details. A bridge so many seemed to have crossed without ever suspecting that some day they might have to live under it!

Terrifying read! Thanks for seeing this. So many refuse to...

GB, I 'know' this man, and others like him. Just like everyone else, all the same we are, yet different.

Now I know him better, having read your poignant story

As I look into the eyes of a Peep like him, I see a life of which most will never know, experience. And I think sometimes that he is rich, and the rest are not.

Excellent portrayal of what is 'real'. Thank you!
PEACE!