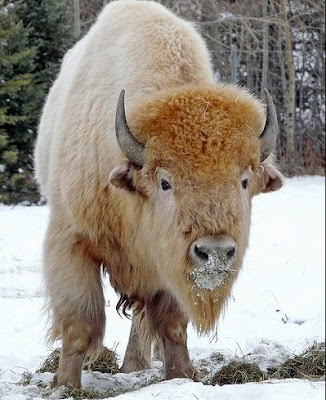 “Anger and woe, sin and her shadow misery,

decent to the smoking char that was the ranch

house, the blackened skeleton of the gutted

3(slow tracking shot) across the devastation.

The fires were out. Smoking ashes lie like gray

a pattern, swaying broken in the prairie breeze.

4(dolly shot to center) In the middle of the burn

stood the tall staircase. It was a defiant thing,

charred, hollowed, yet another gutted treasure,

an arrogant prideful railless sentinel that would

soon crash into crumbs with the weight of a

spider upon it, and yet contrary to physics and

that rose up from the ashes like an angry middle

digit toward an indifferent sky, and terminated,

heavy branches out over the yard. Gun shots had

torn off large chunks of bark on its trunk.

The long shadows of its leaves lingered coldly over

the stiff dead faces of eight men, most with their

eyes still open, who lie in a ragged line, their bodies

riddled with bullet holes, boot heel tracks all over the

yard from dragging their carcasses from all points

to lie at attention for their last reveille. They were all

face up, staring with sightless eyes at the bright

summer morning, at the flies and butterflies that

lit on their gray faces, sipping at the dried blood

7(medium wide shot) and at the tall buffalo hunter

who stood between them and the remains of the

burned house, staring at the stiff pile of lifelessness.

He had his Sharps cradled in his thick arms, while

the buckskin fringes on his attire swayed sweetly

in a wind dance with his long black hair. From his

belt hung a potato sack; dozens of sticks of

dynamite poked through the burlap, the last of a

powder cache he had hidden under the bunkhouse.

features were gaunt, his eyes simmering. He

turned and placed his gaze on the ranch house.

He scanned through the iron gray ash, searching for

a remnant, a tiny piece of what had been there the

day before. He could make out part of a dining room

chair, part of a gilded picture frame, the brass hooks

from a coat rack. Most of it was gone, his childhood,

parents, brother, his past and perhaps his future,

11(medium close-up) He tilted his head back, his

eyes widened, and he exhaled a silent scream.

Tears leapt from his eyes. He could not remember

what his mother’s face looked like. Then he inhaled

and his face hardened. He wiped his runny nose on

his sleeve. He became aware that something was

Buck spun around with the breech loader cocked.

13(medium wide-shot) Buck’s back to the camera.

Above the heap of cinder that had been the barn,

and the burned corpses of several horses, on a

14(one-shot) Its massive ivory-colored head was

held high. It stood so still it might have been a

statue but for the breeze ruffling its shaggy silver

coat. Its yellow-black horns shone in the sun. Its

The white mammoth raised its tufted tail, and with

a loud bellow, it galloped down the hill straight at 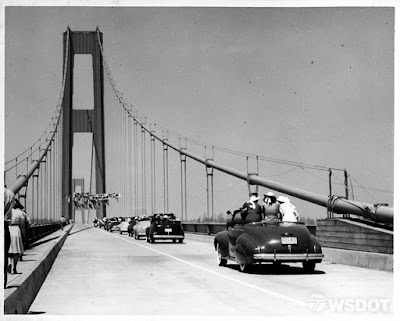 “Sometimes you get the best light from a

is an inland sea.

and a busy waterway,

churn their way between

on what would become

peering over a mile

to what would become Gig Harbor.

The water runs deep and swift,

with strong currents and high winds.

engineers stood at the same spot

who designed a suspension bridge

that would span that distance

It took three years to build it.

immediately. During high winds it would

It had a design flaw called aeroelastic flutter.

snapped in half, and crashed into the Sound.

Miraculously no one was killed. A dog

named Tubby was the only fatality.

The remains of the old bridge

and over the years it created

one of the world’s largest man-made reef;

home to teeming  pods of octopi.

as monuments to folly and hubris.

--It was the Bridge to Nowhere,

and many openings for the wind.

a companion bridge was completed,

parallel to the other one. 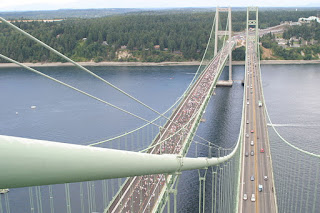 Posted over at  d'Verse Poet's Pub 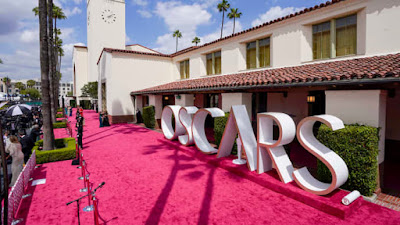 love of movies helped us get through it.”

is on my mind, pushing the flitting sun-breaks in the

overcast Northwest beyond the cognitive back burners.

Sure, it was a nice try to reinvigorate a lackluster set

of recent awards shows, but due to Covid restrictions,

they broadcast it from a train station, with a quarter of

for something chic, and woke, and creative. What was

delivered was about as exciting as a limp phallus or a

sad pair of sagging breasts. Everything seemed off-

kilter and out of balance, while suffering from chronic

fatigue syndrome. 85% of the movies honored were

streamed and had never seen the inside of a theater.

We should have called the show the “Emmscars”.

There were no musical numbers, no live orchestra;

rather there was this hip-hop DJ, fresh from some

bar mitzvah, and no live host. It was bogged down

like a dose of sodium pentothal. Even the “In

making it hard to keep up, or feel anything.

I don’t support most of the “cancel culture”, but as a

has faithfully watched the Oscars since 1953, this

filming a meeting of the City Council. People

Magazine called it “hilarious, emotional, and

inspirational.” They must have seen a different

broadcast than I did.

A squirrel in our

maple tree chattered at the 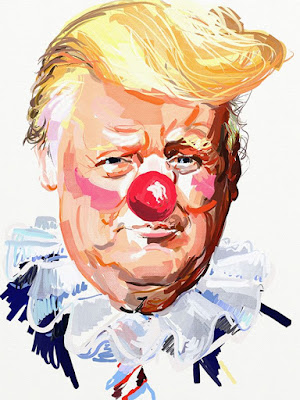 “We all know that Trump was a clown, Fascist and

We all remember the stupid lame idiot, who

stole the Office of the President, keeping it

for a long four years. He was badmouthing the Jews,

Mexicans, Muslims, and Blacks, giving us a fit.

It’s a mystery how this ridiculous clown

kept himself in power, and we never found

blocked or removed, once he put them into law.

We suffered forever and could not find a real key

to rid us of his evil, and his every flaw.

Then came the election, and we discovered that

our right to vote finally got rid of the Rat. 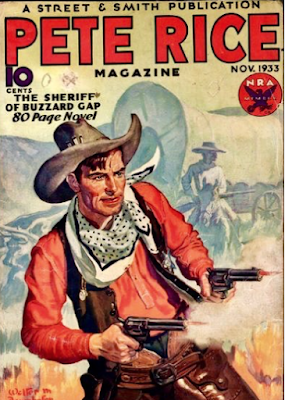 “Someday we’ll remember so much that we’ll build

the biggest goddamn steam shovel in history, and

dig the biggest grave of all time and shove war into

it and cover it up.”--Ray Bradbury.

thick dust kicked up in his galloping.

and the snap of the reins against its flanks.

4(drone shot descending) toward the rider, until

they fill the frame.

5(cut to a medium wide shot) at ground level, as

Buck gallops toward the camera, overtakes it

as the mare’s muscles rippled.

7(cut to normal traveling shot) The mare was a

sprinter. After five miles she began to cave in. Buck

let her slow to a canter. He turned northeast running

down the dark shoulders of ridges, through shadow-

timber. It was still early and damp, and the sun was

without heat. Buck stayed in the saddle.

9(medium close up) Buck could see no one was

following him. Posses did not form themselves, and

with the deputy dead and the sheriff wounded, chaos

swirled in the streets. He pushed his hat back onto his

back, the leather strap tight under his chin. He

smoothed his sweaty hair, and stretched his tense

10(medium wide shot) He pulled his black hat back on

and loped north. He kept to the thick timber, staying off

11(medium close up) He stopped every few minutes

and scanned his back trail. He didn’t see a sign of

anyone. Sonofabitch, he thought, Not even Bronson

had sent out riders. He had poked a hornet’s nest, and

folks had to deal with their stings.

13(medium wide travel shot) He rode up a steep

hogback, picking his way around a stand of swelled-

and he and the mare could still feel the chill of

the morning in their lungs. He stopped in a

tiny glen, and dismounted. The stock of his

Sharps stuck up out of the rifle scabbard like

a hand brake on a wagon, like a rudder on a

with adrenalin. He took a long piss, and steam

rose off the stream and the puddle in the dust.

in voice over, as the camera captures the halcyon

moments in the glen--flitting birds warbling and

of wild flowers, a pair of squirrels chattering at

him from halfway up a pine, and the thick sweet

scent of pine needles in the air.

Could I be more fucked? I doubt it. Antlered Buck

is burned down, and with it the demise of horses

and dreams. Death has rode roughshod, and He

is not done with me yet. Salina will be beside

herself with worry. Joe Hop is not going to cut me

any more slack. I have stolen a horse, and had

another shot out from underneath me. I broke out

of jail just as a U.S. Marshal is expected. Bronson

holds the aces. He avoided a meeting with me. I

shot up his saloon, and I don’t know if Joe Hop

determined the assholes who attacked us at the

ranch were actually sent by Bronson. My Appaloosa

stallion is beyond reach, and some motherfucker

shot my dog. Christ in a wheel-barrow.

16(medium wide shot) He swung up into the saddle,

stood up in the stirrups, and raised clenched fists

to the heavens. Settling into the leather, he patted

the mare’s neck, nudged her with his knees, and

galloped straight into the sun, down into a deep

18(cut to overhead drone shot) rising slowly up from

the rider, higher and higher, until Buck was just an ant

riding a beetle, scurrying out of sight.