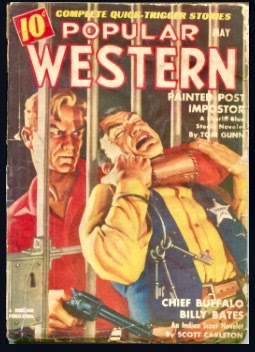 onto the cache of pistols on his desk. Out cold, he

looked like he was sleeping. Buck bent down and

placed two fingers behind Hop’s ear. The pulse was

Buck stepped around Hop, and jerked open the

lower left drawer of his desk.

4(close up) The Thunderer and the sawed-off

crouched in their holsters.

6(close up) The hunter buckled the heavy gun belt on

and tied down both holsters. His hands filled up with

blood as they hovered over his own weapons.

7(medium wide shot) He plucked his jacket from a coat

rack, and hurriedly put it on. He swooped up his Sharps.

Hop moved a little, his face buried in the spider’s nest

of gun belts and iron. With the Sharp’s in one hand, he

stepped quickly to the front door. He opened the door

8(sound cue) Metallic creak as the door opened, over

9(cut to outside, overhead drone shot) Buck stands for

a moment on the puncheon walkway.

street lights were still lit. A foggy cold mist lie on the

town. His nose tingled as stepped down into the damp

morning air. The sun of gold was stirring on the horizon,

behind the purple mountains, over the top of the Grange

Hall, the warehouse, the CHINA DOLL, the bank, the

forehead began to appear in the tangerine sky. Some

of the markers, crosses, and stones up on Boot Hill

were catching the first random rays, and their sad

edges were soaked in blood.

12(wide shot) Blackthorne was quiet, as silent as

the grotesque pile of stiff bodies on Hop’s front

porch. There were two horses tied to a hitching rail

near the jail. Buck cautiously moved in their direction,

the Sharps at the ready, his eyes clear, his flared

As he walks, we see the windows in front of the

felt table tops were rolled up to them. A light came

on at the Bronson House Hotel, above Wallace’s

14(shot tightens up) One of the horses was a brown mare,

reined. The other was a younger raven-black gelding,

who was alert, and watching Buck. The tack on it’s

broad back was worn, but well made. The gelding talked

to Buck. The hunter stroked its neck, and reached for the

leveled. A tiger-striped cat burst out of a bush. It ran

hissing and growling across the street and scurried

under the boardwalk. Buck heard a dog whine, Cheewa

appeared out of the shadows, staring up at him, its eyes

Buck stepped up into the stirrup of someone else’s

saddle, and settled into a comfortable outfit. He had

never stolen a horse before. He slid his Sharps into

an empty rifle boot. He backed up a couple steps,

15(the shot begins to widen) The horse slowly

picked his way through the pale dust on the dark

street. He saw the open road in front of him, and

he strained to canter, but Buck held him to a walk.

Cheewa trotted out ahead of them, his thick tail

wagging. Buck turned in the saddle. No one

stirred up the quiet. The light in the second floor

of the Bronson House was now out. The Wallace

house was asleep. He thought of his sweet

Salina, exhausted and wrapped up in green silk 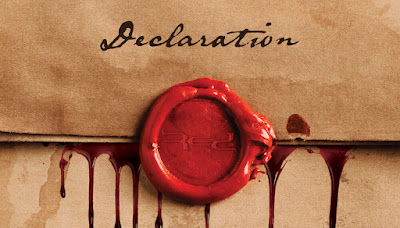 “There is a shade of red for every woman.”

I’m kind of a big shot

in the color spectrum,

part of the trinity of

in hand with yellow and blue.

I’m kind of the Gemini in the group,

I am the vigorous hue

at the end of the visible light spectrum.

I have a brilliantly mantled clan

scarlet and vermillion to blueish-

or dusky rubies and weather-worn brick,

from almost black currant to apple and

All mammals can see me,

but dogs and cattle can not.

They only see yellow & blue.

I seem gray to them.

red--he is just irritated by the

movement of the cape.

Most folks just call me Red,

but I vastly prefer Rojo.

My esthetic side leads to

My malevolent side leads to

From day one to wound one

I have been associated with blood,

have made me a popular

I am proud to be wedding dresses

in India, and flags in Japan and China,

flapping in every language. I remember

mixed me from ochre for their cave art.

I am a power color.

From power ties (except for Trump’s)

I will get your attention.

can designate you as saint or sinner,

Yellow and Blue are OK,

but when it comes to energy and power--

“We are reminded of the fairies’ hazelnuts, in which

As an only child,

I would play beneath

It grew in the loving shade

of an ancient oak.

My mother would grind them up.

that she smeared on her baked goods.

My father called it a hazel tree,

but it was more shrub than tree.

I was mysteriously drawn to it.

It became my special place,

my refuge and emotional bastion.

I would take my writer’s notebook

out there and compose poetry.

I called it Hazel, as my companion

One day my father

went off to War,

to fight the Nazis.

drove into the yard.

that my father had been killed.

I went out to the hazel wood

because a fire was in my head.

She held me until 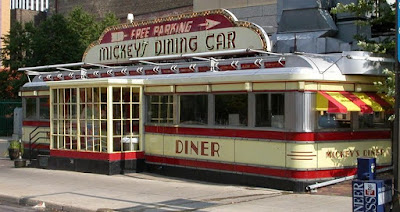 “A poet could write volumes about American diners,

because they are so beautiful.” --David Lynch.

in our small town

we all used to hang out

were invented in the late 50’s, diners

and drug stores were the only places

one could get a hamburger.

There was just something

so Art Deco about those

that showed up after WWII.

Mickey’s had been built

My Dad use to take me there,

just me and him,

as a treat after

one of my little league

I was a pretty good

Parked all around Mickey’s

Parked amongst the pre-war sedans

These cars were trimmed

with tons of bright chrome,

each with its unique hood ornament,

of the stainless steel trim

on the dining car.

and the pounds of chrome

on every door, and

and the twin glass packs,

announced to the world

that 10 miles to the gallon of gas

was OK, and America was

the most prosperous country ever.

Inside the diner, a row

were bolted to the floor

in front of a stainless steel bar.

The grills and fryers were

The booths, all plush

with their red Naugahyde covers,

lined the window side of the car.

I preferred sitting in a booth.

and a chocolate shake.

and they left the chrome canister

with the left overs in it.

that replaced the diners

never had the magic and allure

that the diner cars had.

We of the Fungi 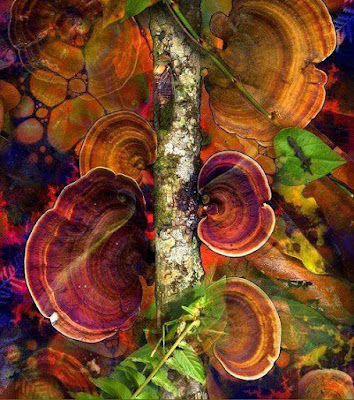 We of the Fungi

“There are thousands of little mosses and fungi that

are seen mostly as unsightly objects, but when seen

with the eyes of a poet, they become radiant of

Welcome to the Kingdom of Fungi.

My name is Malcolm Mushroom.

My best pals are Timothy Toadstool,

We denizens are often

range from microscopic to mammoth.

You think you know us, but believe

me, we have secrets that predate

Botanists considered us to be

plants, but actually we are of

a separate kingdom from both

plants and animals, and we lean

most toward animal characteristics.

We are complex co-creators.

We are the principal decomposers

of all organic materials, and ecosystems.

know, incapable of making our own food. We

are unidevourers, liking to chow down on both

plants and animals. Our love-life is both sexual

and you have only studied

a lot of mystery between us. Some of

us, like pigs and their truffles. We consider our

We can tolerate that some of us

can be a food source for you,

we can be friendly, or

we can kick your ass.

We of the Fungi,

thriving beneath your feet, wish

you the best of health.