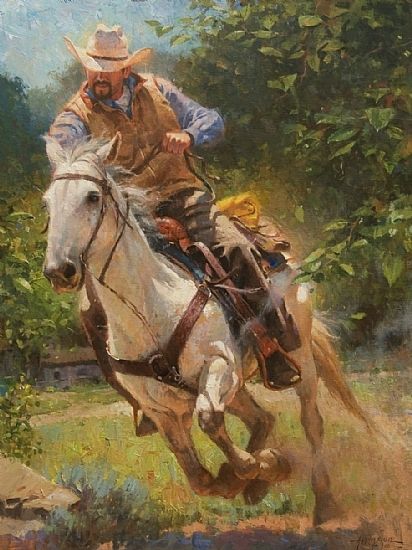 “When riding a horse, we borrow freedom.”

2(wide drone shot) the encampment in front of the

bright red canvas with yellow tassels. These were for

cooking and gathering. There were three smaller

sleeping tents to one side.

Jesus was warming up some chow. The river was

fifty yards from them. One man was washing tin

dishes, while another was fishing. Adjacent to them

was a corral with six horses in it. Fancy Spanish

saddles were perched on the top railing.

4(one-shot) Buck stepped out onto the low porch,

using the crutches, that were capped in lamb’s wool.

5(expand to wide shot) The men exploded in

Buck held up his hand, squinting in the sun.

Enough, enough--gracias. You are wonderful

compadres!  He sat down in a tattered wicker chair.

You would think I was Christ risen.

was only stabbed a couple of times. You were shot

Buck laughed, holding his ribs. Jesus lifted up a hand;

I know. I will try to behave. Jesus put a red sombrero

on Buck to shield his eyes. They placed two over-

turned buckets next to his chair, and brought him some

He sipped the coffee and his eyes widened:

Damn, son, who boiled their socks in this?

Everyone laughed. One tall charro said:

Probably all of us at one time or another.

Buck groaned. Then he began to eat slowly. The

bacon was thick-cut and meaty. The eggs were

over hard with black pepper on them. The beans

Buck: This is some good groceries.

Tall Charro: One good thing about being on the Buck

Watch, is we eat good.

8(two-shot) After breakfast, Buck shared a cigar with

Buck: When I get back on my feet, how about you

fellers come to work for me?

Jesus, after a pause, gazing out: Nooo--I don’t think so.

Jesus: smiling: Miss Salina already hired all of us. We

are for you already.

Buck chuckled, and sat up straight in his chair,

shaking his head and folding his arms. You know, I

Jesus: Probably not, but you got your hook in her

good. So you are a damn lucky hombre.

Buck puffed on the cigar and stared out at the corral.

Suddenly his body jerked. He pushed back the

sombrero, and pointed out at the horses.

Buck: Who owns the Appaloosa?

Jesus: You do. No one else will ever own him.

Jesus: Yes. We found him picketed in the trees when

we came to rescue you.

Buck: with a tear rolling down his cheek: I am blessed.

Jesus: I promised myself that if you cashed it in, I

would return that stallion to the wild.

Buck: I think I’ll be sticking around for a while.

Jesus: Good--that damn horse is wearing us all out

riding him. A true war horse, a special spirit. So heal

up and mount up.

Buck: I can do that. 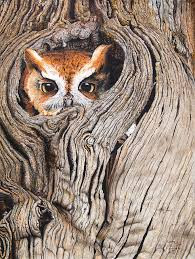 If I don’t get some shelter,

When I walk in the forest, and it starts to rain,

I look at the trees. Pine, fir, and larch branches

start far from the ground. Cottonwood, poplar, and

a dry shelter from the deluge.

I snuggle up next to a wide rough-barked trunk, and

cover myself in crisp dry leaves. I peer out through

looking at the rain, coming down in diagonal sheets

to the forest floor.

I close my eyes and dream of elves and owls who

create a dwelling in the great trunks. I awaken to the

trill of birds and the buzz of bees. Smiling, I shake off

The owl sleeps in a

tree during the day, waiting

joyfully for the night. 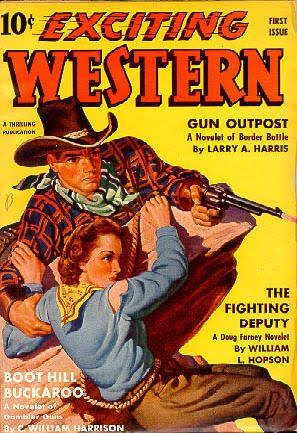 “Those who keep silent about their pain

3(expand the shot) It was late morning. The sun

was bright behind the tattered window curtain,

made of a potato sack, and around the edges of

the door. He yawned.

He sat up on the side of the bed. He still ached

everywhere. Dos yipped at his feet, wagging his

butt and licking Buck’s hand. He petted the dog’s

head, rubbing behind his floppy ears.

Buck: Yeah, I know, life is rough for a house pup.

No one ever feeds you or plays with you.

Buck: You sly little shit, I don’t buy it. I fed you last

night ( pointing to a 10 pound sack of Spratt’s Dog

& Puppy Cakes) and everybody feeds you table

6(one shot) the front door opened and Jesus

Buck: Can you feed this pup? He seems to think

Buck: No shit?  I’m really getting lazy and spoiled.

Jesus: It’s called healing--enjoy it while you can.

Jesus: Si, que cabron, one tough son of a bitch,

Jesus: And yet, even he could not survive the

lead bath he had--but no one will ever walk

in his footprints again.

Buck: Damn rights, and now he waits for both

of us. There was a moment of silence.

So what kind of chuck you got?

Jesus: Chili, tortillas and bacon...and you can have

a couple of eggs if you want them--and some coffee

that is stronger than cat piss!

He grabbed a pair of crutches leaning on the wall.

His left leg was in a cast. He hobbled a few steps over to

a chipped ceramic chamber pot and pissed a pint.

Jesus: I’ll fix you a plate. Do you want it here, or do

you want the adventure of stepping outside and joining

us on the porch?

Buck smiled, and rubbed his stubbled chin: You know

what? It looks like a fine day outside. How about I

enjoy my late breakfast out there with y’all?

Jesus: Could you use some help with the walking?

Buck: Probably, but hey, let me cuss and moan and

Cowboy up, and I’ll meet you out on the porch.

As Jesus opened the door, Dos scampered outside.

Jesus: I think he needs to pee as well.

Buck: I suspect he crapped over in the corner last

Jesus: Better than on your bed.

They both laughed. Buck groaned.

Jesus: I know--don’t make you laugh.

“Music is always a creative process that comes

from the heart. It’s a feeling, a vibration that we

of the “Salty Peppers”,

akin to the big sound of “Chicago”.

a unique kind of sound,.

He put together a rag-tag

bunch of his musical friends,

The band has gone on

They have sold 90 million records,

are on the Hollywood Walk of Fame,

and have been inducted into

the Rock and Roll Hall of Fame.

call it their “All time favorite band”.

When Maurice was asked why

“Water” was left out of their name, 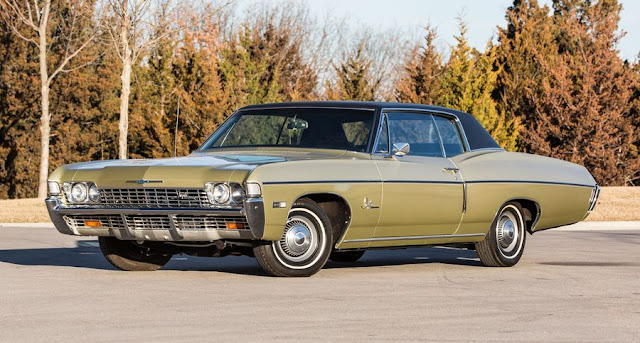 “Success is a lousy teacher. It seduces smart

He had Chevrolet Impala

on his chest; gold crayola 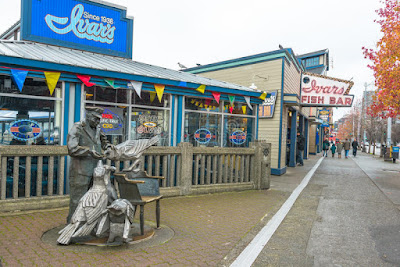 “Sex in your seventies is still great, and it

for the first time

when I was seven.

batters at it’s back door.

The smell of kelp,

dances in the salt air.

in front of the wide high counter,

The menu is printed huge

on the back wall.

You must yell out your order,

as one of them repeats it

and writes it down.

Then you fade back and linger,

waiting for your food.

The Alaskan cod and halibut

is always fresh and tasty.

is the best I’ve ever had,

The fries are golden & perfect,

and the tarter sauce is beyond compare.

in an outdoor covered area,

that’s heated in the windy winter.

begging for a handout.

You would throw a french fry,

or a bit of fish.

and there was always

a gull there to catch it.

to  the Seattle main Ferry Docks,

beneath blasts from its horn.

A meal at Ivar’s

was quite the character,

and he did all the TV commercials

for the restaurant, reminding me of Burl Ives.

Their motto is “Keep Clam”.

I even have a bobble-head doll of him.