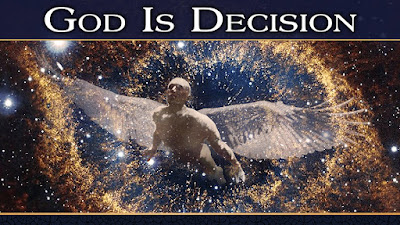 “I tell you, you are indeed ongoing immortal

essence, who has been living for a billion years”

has her 80 acre compound, the

I’ve read several of their texts,

and could see the Gnostic influences.

The following is a conversation

between Ramtha and myself.

What about the Zen teachings, where our

Higher Self beyond the veil, is setting the bones

and parameters for our next reincarnation?

Yes, just face your fears and allow yourself to

Alacrity & fear are necessary processes, but I do

feel that the monsters of my mind can and should

be controlled. We are powerful entities.

Accept that these thoughts that were bred into you

are just crust on the loaf--the Universe is calling .

Yes, my spirit guides do whisper in my brain, and

sometimes I do pay attention.

You, who were brilliant light in the void, did create man

in order to experience life on this plane.

I always did like the notion that we, each of us,

co-created matter and man, but that implies that we

also helped to create chaos, war, and pestilence, and

that is a leviathan on our backs.

If you are referring to the Covidvirus Pandemic that

presently ravages the planet, you must understand that

the Universe has a plan. Stupidity is not rewarded.

and awakened--ready to reboot and rebuild.

Hope is poor currency. Ardent focus and clarity will blow

you to safe harbor.
But what is the Great Pumpkin gets re-elected?

Then the purging and culling will not yet be completed.

The Ascended Masters are applauding. We appreciate

If I’m above ground, in about a year, I’d like to talk
again.

Above or beyond, it shall be so. 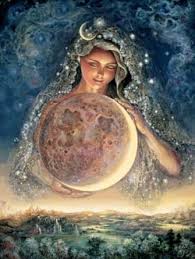 image of moon goddess from pinterest.com

“At night , I open the window and ask the moon to

come in and press its face against mine.”--Rumi.

Damn, what a bummer to discover there is no Man

in/on the Moon--and no Nazis and no space port for
UFO’s; doesn’t seem to be made of cheese either.

She is quite shy about revealing her dark side, never

allowing us to get a peek; demure, mysterious.  But

satellites and astronauts have now seen her naked

behind, and the report is it’s unremarkable.

In 1959, post-Sputnik, the Russian crashed an

uncrewed space craft on the surface, and another one

that made a softer landing in 1966 . Then the United

America put six men on the moon. They planted a

couple of flags, bagged up some rocks and dust, and

left. For 48 years, no man has walked, or played golf

All dogs howl at the

moon; what do they know we don’t?

“To argue with a man who has renounced reason, and

I just heard a clap of thunder

one of the twin towers, like my righteous anger

shooting from my fingertips

and cracking open the sky, followed by a deluge

pounding on our deck cover and garage roof

and defecating on our Democracy.

were passionate poets and patriots

who raised their Excalibur Pens and defiant voices

in order to elucidate, illustrate and illuminate

When it comes to the truth, Trump has

brutalized, raped, and sodomized it

Impervious to criticism, #45 is busy

doing his Caligula imitation while

and spewing raw sewage from his fetid innards

onto the political landscape and the face(s)

of America. He plants his nose in the sacred

vaginas of Liberty and Justice, and his vile forked

tongue in the pliant ears of his willing lemmings.

Every night he reads Mein Kampf as his devotional.

This very day, at a press conference, he called

mail-in ballots a Democratic scam, and he would

not guarantee A peaceful transfer of power if/when

he loses the election. We’ll have to see, it depends

on how much fraud we uncover from the Deep State.

He wants to Throw out all the mail-in ballots,

knowing full well that 85% of his followers will show up,

maskless, in person to vote.

His malevolent disturbed nature is uncaring

of decency (not a shred),

of shame (never subscribed to),

of honor (a lifetime without it),

of tradition (does not respect it),

of the Constitution (has never read it).

The rabid wolf is at the door, folks; 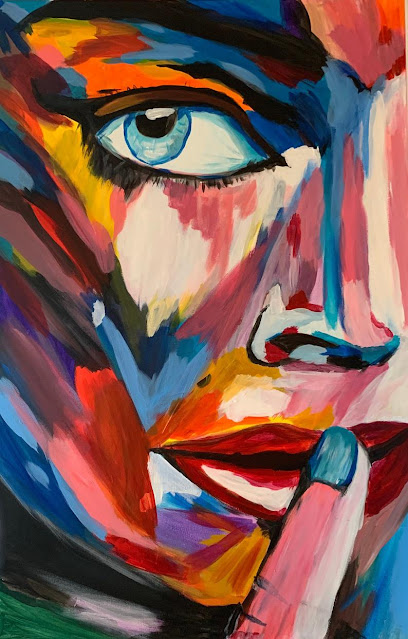 “ I have learned silence from the talkative,”

As an Old Soul

I’ve always got a lot to say.

You may pick the subject

and I will take it from there.

if you pick movies, politics, or religion,

for I have 76 years of stored data,

that will pour out ad infinitum,

untilI I take a breath,

or that ferocious forefinger

Of course, I refer

and to some extent

You can’t find it or capture it

midst a meadow in a dewy glen

or the verdant depths of the forest,

or underwater 50 fathoms below,

or in the catacombs of a city,

or in the flinty bowels of a cavern,

or at the bottom of a mine shaft.

if rife with breath and heartbeats.

where I am an astral projection

for a few precious moments
there might be an absence

where even movement is soundless,

but I would submit

or the fluttering of my cosmic wings.

According to my Sci Fi training,

I expect that motion

too much is just

that initially there is no after life,

that we are thrust into the Land of Nothingness,

until Jesus, or his saintly minions rouse us.

Probably, these folks’ souls do encounter

this terrible silence because

they expect it, actually create it.

Since time does not exist beyond the veil,

all souls do, at some point, discover

the truth, no past, no future, just

the Glory of the Eternal Now.

I’m pretty certain, while there, I remain just

as gregarious, vociferous, garrulous, and

loquacious as I have ever been. I cannot even

with his holy forefinger. 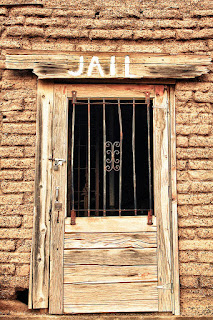 “These here jail baits is just set on the trigger

of the hoosegow.” --John Steinbeck

Of Mice and Men.

2(two-shot) Buck stood with his thumbs in his belt,

staring at the dimly-lit bulletin board of wanted

had a dozen outside lanterns; one hung in front of

the jail. Hop unlocked the big door and motioned

for Buck to step inside.

3(three-shot) Wallace stomped onto the boardwalk

just as Hop followed Buck through the dark doorway.

Wallace: The shit’s in the fire now.

silhouettes in the semi-dark for a few silent moments.

and the interior lit up.

7(cut to wide-shot) The jailhouse was clean and well

kept. The back of the front door was a plate of steel,

and it was hung with massive hinges. It had taken

the blacksmith two weeks to forge and fit. A steel

plank perched in a poker stand alongside; an extra

precaution to seal the door.

To the right of the entrance was one barred window,

fitted with metal shutters that swung down over it. Three

tall arches were the main support of the building, dividing

the jail into three areas--the office and reception area, the

cooking and living area, complete with two Army cots, and

the cell block. There were three cells, one large one in the

center, and two smaller ones flanking it; all double-locked

Behind Hop’s desk there was a gun rack, sporting a

Creedmoor, a Spencer, four Winchesters, and a couple

of scatter guns. The walls were brick, surrounding them

carved desk and plunked Buck’s weapons into it.

Hop: Better give me that damn vest too.

Buck shrugged and began taking off his ammo vest,

never taking his eyes off the Sheriff. He handed the

Buck: You still haven’t told me what you found out at

carrying Buck’s Sharps. He stopped next to Wallace.

Hop holstered his handgun and held his arm out for

in his short muscular arms. He held the rifle up to his

shoulder, and sighted at a calendar on the wall of a

herd of buffalo blocking a train.

Hop: Uh-huh, what do I know? I know that in six

hours, Mr. Buck, you have participated in two

gunfights, and fourteen men have been killed.

Buck: All in self-defense.

Hop: I know that right now, after disregarding my

advice, Bronson could pop open this jail like a man

with a Bowie knife opening a can of peaches.

Wallace: Now just a damned minute, there was

Hop, calmly and coldly: Henry, there was a time when

your opinion had worth. That time lit out hell-bent a

couple of hours ago.

Wallace: Are you carrying Bronson’s water?

Hop stared at the storekeeper, not answering him.

The deputy leaned against the wall, the brim of his

hat covering his eyes. A yellow bandana was wrapped

around the knife wound, stippled in blood.

Buck, his voice low and tired: The man asked a

Hop: Billy, you escort Mr. Wallace over to the Doc’s.

I imagine Doc and Salina could use some help. They

got a full house. While you’re there, get your arm

room without a word, angry and frustrated.

Hop: When you finish at the Doc’s, make some rounds,

and then get back here. We’re staying at the jail tonight.