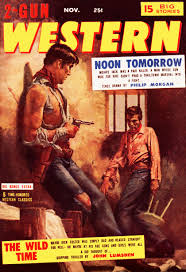 “Courage is in the air in bracing whiffs, better

than all the stalemate ands and ifs.”

1(medium close-up) Buck: What was his name?

lowering his chin, shaking his head slowly, and

staring a hole in Bronson.

Dancing Bear; a friend of mine. He held his

Bronson: Paul; you help your brother down the

street to the Doc’s. Burt, you go with him.

The sheriff motioned to the door with the barrel of

his Colt. Buck stepped over the Indian, then

turned back, Adios, Jimmy Dancing Bear. You were

a good man. Be seeing you again one day.

Then he pushed through the red half-doors and left.

Wallace paused for a moment, staring down at the

Indian, red pulp and pulled pork in a bead shirt.

Then in his arthritic gait he rushed after the others

4(one shot) Cash Bronson stood out on the

boardwalk, struck a match on a pillar, and lit a fat

6(three-shot) Paulie struggled out next. He and a

ruffian held Thor up, who was pale from pain and

7(wide shot) The trembling trio stumbled into the

white dust, making their way toward the Doctor’s.

8(sound cue) It’s over! someone yelled

of the shadows and alleys between the bank, the

talking loudly--their voices echoing back and

forth across the main street.

11(cut to two-shot) Cash and the deputy.

Billy:  I count five, and one badly wounded. A guy

in here tells me they caught Jeb Barnes in a

cross-fire, and he’s over to the Doc’s now. Must

be quite a party.

He began to walk slowly away, puffing white smoke

against a black sky.

Posted by Glenn Buttkus at 2:38 PM

Oh... I find Bronson's smugness afterward especially chilling. It is if enjoy the death of people. Does he have an undertaker business as well?

I agree with Bjorn! Bronson seems somewhat mellow and smug after the incident. It's as though he revels in death. Waiting to read what happens next!

That is some gunfight and ending Glenn. Bronson is cold-blooded, and merciless.

Love your grasp and eloquence with regard to the language and atmosphere of the cowboy western Glenn. Not something I can match brother, but I enjoy reading your work! Oh, and yeah, before I forget... FUCK TRUMP!

I love the expression ‘staring a hole in Bronson’. Buck can probably stare down anyone. But what a gruesome description of the Indian, ‘red pulp and pulled pork in a bead shirt’ – they certainly made a mess of him, and the doctor has his work cut out with the rest of them. My favourite bit is when the people ‘poured out of the shadows and alleys between the bank, the
post office, the general store and the Bronson House Hotel’ and the way they react to the gunfight.

I am still finding it hard to wrap my mind around the reality that the Indian was murdered by being shot in the back after showing such courage and honor, while the hub of evil is smirking and smoking an expensive cigar. Let's just say I'm on edge until the next chapter!

You are masterful in the art of charactes and the time in your western series. I found the contrast of the white dust unsettling as I imagine blood drizzling along the path. This man seems to have no mercy. I hope karma catches up with him soon.

I'm with the others, Bronson does seem cold and smug.