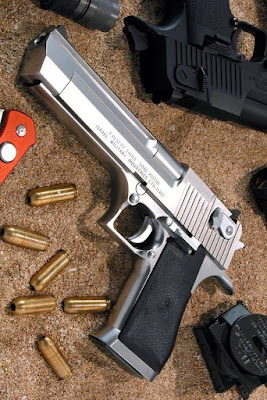 ‘“We saw the lightning and that was the guns, and

then we heard the thunder and that was the big guns”.

There is an Eagle from the Middle East that has no

wings. It is a big frame revolver that has the stopping

power of a buffalo rifle. It is the most powerful hand-

gun in the world. It was created for the elite Israeli

semi-automatic pistol that chambers a 325 grain .50

This is a pistol with rifle DNA, like the M16, it uses a

secondary to its massive load, and this softens the

long and it weighs 4 1/2 pounds. The grip is formed

for two-handed shooting. It comes in basic black,

There is a Playboy cover with Pamela Anderson

holding a pink Desert Eagle. The Eagle is very

picked up by any other military. It is basically a

celebrity handgun, and does not have any real

practical utility. Jeffrey Epstein had a brace of

them. It takes big hands, strong arms, and a big

ego to handle one of these bad boys. They have

used them in 400 action movies and video games.

Posted by Glenn Buttkus at 1:50 PM

"This is a pistol with rifle DNA" This is frightening! What an amazing TWIST to the prompt, Glenn. And a frightening one. It has no practical utility....except to kill. I remember learning that one of my friends always kept a gun under her pillow in case there was a night intruder in her house. I never again let my daughter go to her house. Her daughter was a close childhood friend of my daughter's. She'd been to a sleepover there and that's how I found out about it. The mom had announced to all the girls not to worry, they were absolutely safe because she had a gun under her pillow to protect them. UGH> This is a memory I was was not rekindled. Never-the-less....an amazing post to the prompt! How did you know about this gun?

Glenn, I profoundly enjoyed your spin on 'eagle' - well done!

BLAMMO take on the Haibun prompt, Mr B!

Wow! that is quite a heavy duty weapon, with the force of an eagle. Very interesting post Glenn.

I liked learning about this weapon in your haibun. What the HELL was Epstein doing with a bunch of them? There's no telling but I know it was no healthy reason. I cringe to think of what it does to any living target :(

ouch, such a dramatic weapon ... I prefer to blow them a kiss!

Go big or go home! Thank you for the education on the desert eagle! I love how your haiku accents the prose so harmoniously! Great write!

Wow, that's a lot of power, scary. I learned something new.

That's the most badass haibun I've ever read. I've played a shit lot of videogames and the desert eagle was my favorite hangun in all of them.

Well that was unexpected! I really enjoyed your take in the prompt Glenn ☺️

Wow dude! That’s a helluva slug slinger brother — reminds me why I really do not like guns. I was a medaled marksman in my short sting in the Army Reserve Officer Training — but that is the first snd last period of my life in which I touched a gun. But what a powerful write here Glenn.

Fascinating! I don't know much about guns, and I'm pleased that I don't need to (for the time being at least) but you sure drew us in with your description. Great writing, Glenn!

Glenn, I know nothing about guns, they scare the pants off me, but this one sounds terrifying! A response from left field! I can see why it’s called an eagle with the colours and power it has.

No wouldn't it be wonderful if they were to go extinct?

Alas there are so many who think this is a toy... I prefer the eagles with wings.

That's one deadly eagle. The fewer the better.