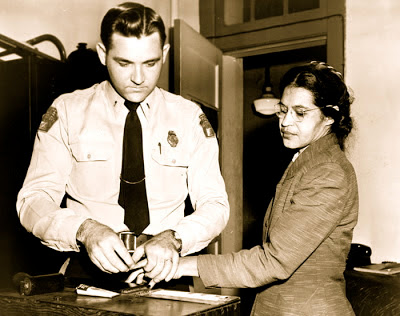 “I just think that Rosa Parks was overrated. Last
time I checked, she got famous for breaking the law.”
--Stephen Colbert

I just read today that it is still illegal for women
to wear pants in Paris unless on a bike or a horse.

Blue laws and stupid legislation still lurk
on the shady pages of law in many places.

No woman can legally parachute from a plane
on the Sabbath.
A woman can still be fined for falling asleep
under a salon hair dryer.
No man may be seen publicly wearing
any kind of strapless gown.
No one can have sex with a porcupine.
If you want to park an elephant at a meter,
you must pay full motor vehicle costs.
No one may fart in a public place after
6 p.m. on Thursdays.

Donkeys are prohibited from sleeping in bath tubs.

Putting salt on a railroad track may be punishable by death.

It is against the law to educate dogs.

It is illegal for a woman to have sex with a man in an ambulance.

It is not legal for a woman to leave the house without
wearing a proper corset.

It is against the law for a woman to drive a car unless
there is a man with a red flag in front of the car
alerting other drivers.

It is illegal for a woman to stand naked in front of a man’s
picture.

While lobbying for the passage of stricter
gun legislation, with the Middle East perched
on several powder kegs, with Iran & N. Korea
threatening to produce nuclear weapons--
perhaps it is silly to point out the absurdity
of some antiquated laws that are presently
“enforceable”, but I assure you if all politicians
were mandated by Federal law to have to wear
pink pedal-pushers every Tuesday,
maybe something akin to legislative
housekeeping would ensue.

Posted over on dVerse Poets -poetics

Would you like to hear the author read this rant to you?

Posted by Glenn Buttkus at 8:13 PM

And we wonder what's wrong with the world...for what it's worth...you can't park your camel outside an establishment where liquor is served around these parts...must be afraid they'll try to hydrate their humps...the scary thing is...these are laws...and if the right psycho lays claim to the throne...you could see them upheld...this was a fascinating, if somewhat terrifying little journey!


"Donkeys are prohibited from sleeping in bath tubs." and "It is illegal for a woman to stand naked in front of a man’s picture." definitely my favs :) Yes. Stupid laws do still exist in many places...to make us laugh when at the same time some other "laws" steal away our basic human rights... great text.

ha. if only that is what it would take to get anything done...its pretty funny to look at some of the laws that are on the books...we have a few her in VA...and do we allow them to repeat the same stupidity...and how do we change it?

Oh, thank you, for all sorts of reasons!

(And may I suggest that 'No one can have sex with a porcupine' is probably not only an unnecessary law but a matter of descriptive fact.)

I hate blue laws... used to live in Bergen County

Funny. Wonder what they will think of next to put on the books. At times it is refreshing to live on a small island where these laws are not on the books. http://gatelesspassage.com/2013/02/02/reflections/

Rosemary said it... "Thank you for this". I so need the laugh and to laugh and the ridiculousness of it all.

Well played, Glenn. Love the absurdity of some of these laws. And love that you put them into a poem!

Crazy laws! Great poem. Thanks for sharing this!

Ha! I am very glad you brought the elephant one to my attention! I will be super careful in Florida! (I actually am already!) Thanks much. k.

So what will future generations laugh out loud at us for? Lots, I'm sure.

Well done! I wonder if it is still illegal to spit on a public sidewalk anywhere.

Illegal to spit, yes. I've worn trousers in Paris without being arrested, so I imagine the sillier ones are just that, silly, left on the statute book by default. The mind boggles at the idea of mating with a porcupine!