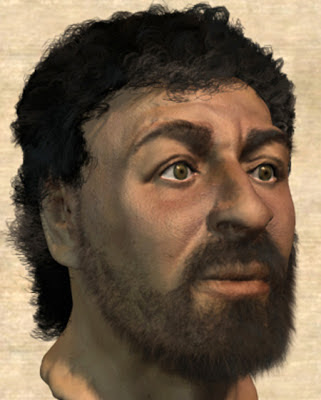 “In every pang that rends the heart,
the Man of Sorrows has a part.”
--Michael Bruce

Was he SonofGod or ascended Master?
Remember that he chose 12 young men as his companions.
Did the arbitrary rule of celibacy spawn pedophilia & homosexuality?

Or were the Gnostics correct and he secretly married Magdalene?
Could Jesus ever have looked like Jeffrey Hunter, some handsome
lean Aryan dude with perfect teeth and flowing locks?

Or was he Maghrabi, dark skinned, hook nose, brown eyes
nappy hair and other Arabic traits? If he returned today
in America, wouldn’t he be profiled as a terrorist?

I still have trouble accepting salty wafer as his body
and cheap grape juice in a Dixie cup as his blood;
but then, Communion has always creeped me out.

Posted over on dVerse Poets-Poetics

ha. you might get under someones skin talking like that brother...smiles...i think that most Christians would have a hard time accepting Christ as we have colored him to our image instead of the other way around...and if he came back now i think people would struggle all the more...ha, i don't have a problem with communion, but even historically it has caused problems for people because of the implied cannibalism...

Strong piece. I think it comes down to what one chooses to believe. The discussion of Christ's features has been there forever, I've heard it so many ways. I have to think, it doesn't matter what he looked like, but the connection you made about profiling done today, is an outstanding inference, really stops one in their tracks and think hard about that. Again, the blood and host, are symbolic, that if you believe they are blood and body, then you are ingesting Christ's blood and body--but there are those who you can't have a discussion with, as they will tell you it is the blood and body and that there's no transformation once ingested. That, I can't agree with, it's unleavened bread and wine/grape juice depending on denomination, the transference takes place through belief. Excellent piece, will have to stop by later on to read all the reactions, should be fairly interesting to say the least. Thanks

Interesting debate - and not one that can be very brief. I wonder how you would have reduced it (if you wanted to) to just 3 lines, or as Fred suggested, to just 3 words. 'Messiah or terrorist?'

I love this because it made me sit up instead of falling asleep.
Whatever the readers viewpoint...he's sure to have one :)

No shying away from controversy for you, hey Glenn? I've never had much time for blue-eyed, blond haired representations of Jesus, but each to their own. In the end, it doesn;t much matter what he looked like - it's what he did - or what it is claimed that he did - that matters.

Love it. It makes you think. I'd like to see him as dark with nappy hair--it's just keeping it real.

Controversial - perhaps, honest - yes.
I can remember church days when Jesus was described as dark skinned with woolly hair.
We angle the words of the Bible to suit our needs...
Anna :o]

It's always interesting to explore the various gnostic texts (translated ones). I think it's worth while to think about, but one that beats on your faith which causes discomforted and is thus avoided by those trying to stay faithful. But I am always of the opinion things should be tested by fire.


Communion -- I think I was too young when I partook it in church. I was always glad to have it because I was hungry and thirsty by the time they got to it.

Communion creeped you out, yes, great! Well, I wasn't creeped out by communion but later in life after being a nurse ... Shaking hands for peace iin the cold n flu season seemed preposterous, let alone sharing wine from the same chalis. I could see this at a family gathering or table for ten but a thousand or more. I love some of the old songs n kneeling n praying but hey let's move forward n quit repeating the same old lectures! Thanks. Hey let's change the mighty Catholic Church, they know they want it!

Your questions seem to me rhetorical and I personally would give the answers implied .... but then, I am not a Christian. I think you are really talking, by inference, about people though, aren't you?

My only contribution to this will be to say that Zacchaeus climbed a fig tree so that he might be able to see Jesus, it is usually assumed that it was Zacchaeus who was small, but the text is ambiguous, it could equally well have been Jesus who was small.

hmm...personally, I always have had an image in my mind of Jesus as looking like some of the striking Afghan or West Afican people..this is short for you ;)