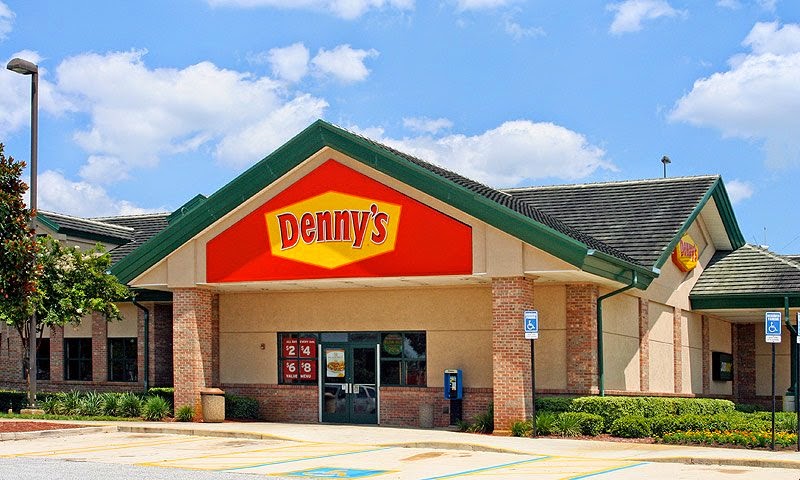 “I die a little inside every time I see an old
person alone in a restaurant.”--Anonymous.

I took my wife to the airport today;
kissed her, missed her, drove on stressed out--so sad.
Since yesterday was April’s last, it’s now May.
I decided to stop at Denny’s--had to piss bad.
While there I thought I might as well have food;
had coffee, soft bacon, hard eggs, cinnamon French Toast.
It sounded so fine, I knew it would be good--
but after it came, my face paled like a ghost.
Bacon was thin & greasy & tasted like cardboard;
the French Toast was nearly raw, the eggs were burned,
the coffee was bitter, the milk was sour--oh Lord.
I forced myself to consume the crap--undefined
rage was rising in my neck; paying the bill, but
stiffing the waitress her tip, holding back my vomit.

Would you like the author to read this Sonnet to you?
Posted by Glenn Buttkus at 9:09 AM

Aye, a blessing to be first.. don't envy a breakfast like that.. I have always avoided a place like that... but this is worse than I had ever expected.. I will for sure add Denny's to my black-list among Jack in the box and Taco Bell... unusual subject for a sonnet.

If I ever visit the US, that's one diner I'll be sure to avoid.

Nice use of the Shakespearean sonnet rhyme scheme, but your meter is off in places ...

Tony, I mixed da Dum, & Dum da in the same lines both for audacity & necessity.

oh - i always thought i would love to have breakfast in an american diner someday - but after reading your sonnet i may should re-think it..

Hi again Glenn. Further to my comment above, if you want to practice your iambic pentameter, then you could do much worse than to read Shakeseare's plays, the vast majority of which are written in iambic pentametric blank verse (i.e. no end-rhymes).

Knowing that the lines are iambic informs the pronunciation of some words, e.g. Jul-yet, not Jul-ee-et in the famous balcony scene.

And if you're really not that bothered ... that's fine too ... smiles.

eww....the french toast would have made me sick...there is a bit of irony in the title...i love my breakfast...but def not raw...

Fun piece! I like how you had axax bxbx cxcx dd rhyme scheme where the final couplet was near-rhymes. Gave this a bit of a "free verse" feel while remaining true to form.

Suddenly, I'm not hungry. Having had a traveling career, I've seen far too many "meals" like this.

Funny and clever - Tony's right about meter; however your unique voice carries the day! Denny's can be all kinds of ways folks. Our writing group met there for years and they did everything to get food out good, quick, with good service and we were a big group. To you travelers out there, there are GREAT diners and dives in the US. Check out that Guy Fieri sometime!

Oh, Denny's! Could there be a better subject for a sonnet? Now I am craving some Moons Over My Hammy...so very gross, and yet...

fun read to us but wasn't that fun to you...even the details of a lousy meal could be so interesting..nicely done...

I really enjoyed this, even though I don't envy you the breakfast meal! I always find everyday happenings as opposed to high-fluting love put into a form like this is just such a lovely juxtaposition (is that the word I'm looking for?) to read! Wonderful!

Used to love to go to Dennys for a great BLT, but they've changed...even the coffee isn't very good anymore....too bad you got sick...hope your wife gets back soon!

This is something to think about but happens in some other places too. If it does that'll be the first and last for me! You socked it like it is Glenn. Great sonnet!

Yep - not a diner I wish to visit any time soon! places like this exist the world over....

someone is upset... missing the wife are you

Denny's IS NOT a Diner! Try a real Diner in the place Diners were born, Providence, RI! Google it! Try the Liberty Elm Diner in Providence, or the Modern Diner in nearby Pawtucket. You'll enjoy crisp bacon, hot strong coffee and great company!

If I visit the US - I think I would decline a visit to Denny's too.
How disappointing it is when our taste buds are excited - only to be let down.
Anna :o]

at least you got to take a leak
so it wasn't entirely in vain :)

Hmmmm sometimes we have to do things just for the their sake!!

Well YOU are better than I! I would have sent it back. That being said you did a great job on this...well done my friend! And NO MORE Denny's!

Oh yuk. That diner sounds like what in UK is known as a "greasy spoon", a quick-stop café for truck drivers that serves heart attacks on plates.

I used to like eating alone in a restaurant - eavesdropping shamelessly and staring, then ducking into my book if someone noticed!