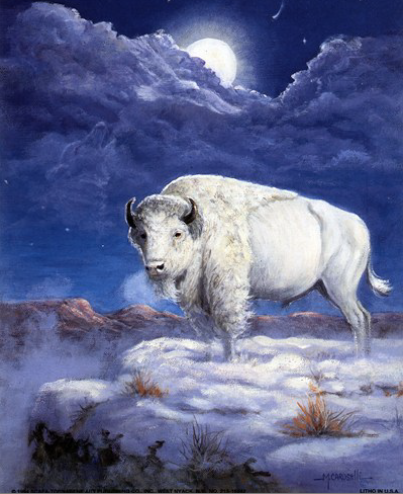 “The voice is raised, & that is where poetry begins. Even today
in the prolonged aftermath of Modernism, free verse remains
the orthodoxy.”--James Fenton.

1(medium wide shot) the trio stopped alongside Buck’s red stallion.
The supplies were in a green burlap bag, hanging from the vaquero
pommel.
2(two-shot, medium close-up)
Buck: What do I owe you for the vittles?
Wallace: Four dollars will cover it fine.
3(sound cue) cello & harmonica.
4 (hold the two-shot) Buck slid the lethal Sharps into its Cavalry
scabbard, & the tall vermillion stud flinched.
5(medium close-up) Buck patted the stallion’s muscular neck, &
rubbed the back of one twitching ear.
6(close-up) the stallion’s gentle eye.
7(close-up) Cheewa barking, the horse flinching again.
8(medium wide shot) Buck’s black dog chasing off a white mutt.
9(sound cue) Indian snake rattle & castanets, blending into a deep
bull bison’s bellow.
10(close-up) Buck’s face, looking up to the hills above town, knowing
that probably no one else heard the albino ghost call.
11(tight two-shot)
Buck: What in hell happened to this town?
Wallace: Cash Bronson.
12(close-up) Wallace, his eyes angry:
--That & a healthy dose of fear, not wanting to do or say anything that
might upset his fucking majesty.
13(sound cue) Delta blues six-string slide, then chord.
14(medium wide shot) People beginning to drift off, to tend to their own
business. Buck reached down into a front pocket in his leather pants &
retrieved some money.
15(close-up) Buck’s extended hand with four silver dollars in it.
16(two-shot) Wallace accepted the payment, clinking the silver down into
a sewed-on pocket in the front of his starched white apron.
17(medium close-up) angle on Wallace as he wiped his chapped mouth on
his red striped shirt sleeve, squinted into the sun, & thought about the last
time he saw Bill Buck.
18(sound cue) cello & saxophone.
19(Flashback--medium wide shot) Interior of the General Store.
Bill Buck, a large unshaven man dressed in torn bibbed overalls &
a filthy flannel shirt, stood across the counter from Wallace.
20(soft focus) Sunlight streaming in the windows. Customers
milling around with their morning shopping.
21(tight two-shot)
Wallace: When’s the last time you ate something?
Bill: Shit, I don’t know--yesterday I think; yeah, I ate some cold beans
& dog-rice over to the Cantina. Pedro had me do some sweeping.
Wallace: Christ, you need to eat.
Bill: Eating is overrated if it gets in the way of my drinking.
Wallace: Damn it, Billy, I’m serious as a bullwhipping.
Bill, smiling: Sure, Hank, whatever you say.
Wallace: Here’s a dollar. Buy some breakfast, then come back over
here & you can help stock some shelves.
Bill: Glad to, proud to. You always been a good friend.
22(sound cue) cello & piano.
23( cut to wide-shot) three hours later, the store is busy. A rancher rushes
through the front door, trailed by a clamor of crowd noise outside in the
street.
24(close-up) Wallace, his face weary & sad.
25(close-up) Rancher: It’s the drunk, Bill Buck. Looks like he passed out
while crossing the street, stepped in front of the Deadwood Stage, & got
run over real good--I don’t think he’ll make it.
26(sound cue) bright banjo chords.
27(medium two-shot)
Wallace: Busy day for you, Hoss--how about a shot of tanglefoot before
you ride?
Buck, smiling broadly: Yeah, I’ll take you up on that, but do you have some
hardtack or jerky--I need to eat something before I drop more booze into
my gut furnace.
28(close-up) Wallace: Sure thing, come on in.
The storekeeper was smiling, but his eyes reflected that old sadness.
29(sound cue) two cellos & a banjo.

Would you like to hear the author read this Cinemagenic poem to you?
Posted by Glenn Buttkus at 8:06 PM

Well, there has been quite a bit of time since I read your last segment...but it seems to me that this segment has a sadder tone than others that I have read. It seems to me that Buck is a bit weary here & I hear the cello's tone.

cool contrast you draw between buck and the drunk...the self awareness of knowing he needs to eat before he drops more in...i think that helps show his character a bit....

An interesting way of tables turned.. it seems like Bill finally learned his lesson.. hope he can help Wallace back up again.. we all have a past, a present.. but the future is almost always unwritten ..

i like that he cared enough to give him some money so he can eat..

That old sadness in the eyes, a bit of a melancholy here Glenn ~ Did he ever learned his lesson, well I hope he did ~ I also like the part of the town being quiet out of fear ~

I feel the comradely ...and human kindness is/was lacking in places in the west, or anywhere. anytime. You have great command of the vernacular, Glenn. I look forward to reading the next one. Quite the insight into characters and direction/production; am I reading a future movie, play, or TV series??

Beautifully written. I admire that you are able to compose all of this. The dialogue is true - sounds like the West where I have lived most of my life, and the scene is vaguely reminiscent of the one in the last Picture Show. I wonder if it was an homage. I'm crazy for McMurtry - and though I should have met him a dozen times, we missed by minutes. Hmmm. Thanks Glenn (for everything)

The European in me loves how your words transport me into the wild wild west every month, Glenn. I admire the way you create characters and atmosphere.

Bill: Eating is overrated if it gets in the way of my drinking.
Wallace: Damn it, Billy, I’m serious as a bullwhipping...

It probably shouldn't have, but that made me smile right out loud... Oh Buck... (love this ongoing saga)

men usually don't have much to say... liked how your lines come right to the point

So interesting as the wild wild west in the 50's and 60's were still a part of mainstream media.. full of imagination of a time gone past.

i always think about watching Gun Smoke and the Wild Wild West when leaving here.. but no i never get around to it..until i come back here again..;)

this piece reminds me of artful calligraphy, how you've sketched in just a few strokes an entire scene, backstory, and subtle yet deep emotionality ~

…makes me think Bill didn't use those silver dollars for eating after all. You've "sketched" Buck out so I see him in my mind's eye - not to mention the scene design as well.

Modern imagination is so formed by cinema (or it was, growing up in the middle decades of the 20th century). We hear its soundtrack throughout our lives, fitting its banjo and cello and slide guitar to fit the moment's angst). Somehow this Buck abides, like the Dude: how he survived his falls into the bottle, his haunting by "the albino ghost call", who knows, but there he is, the albatross of an earlier age, keepin' on keepin on. Cinema makes for a vivid poetic.