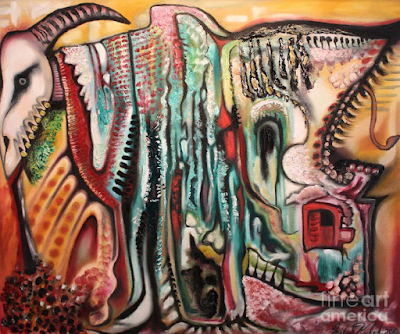 “The crowd is the veil through which the unfamiliar city beckons
to the flaneur as phantasmagoria--now a landscape, now a room.”
--Walter Benjamin.

Our newest toilet
is a Toto,                    but hey,
I’m not so disenchanted       with Kansas
that I might flush myself       down it
to finally find
the red poppy fields,
the coven of white witches,
the sinister flying monkeys,
or singing lollipop dwarfs.

One of my closets is indeed a wardrobe,
because the builder did not fully appreciate
or comprehend sartorial decorum, just an oaken
stand alone with carved wooden doors, but I swear
on one fevered night the Indian did step out of it,
with a lion on a red leash, & two eagle feathers
in his teeth. I couldn’t exactly tell what tribe
he was from because the moonlight was
shadowed in dim gauze.

There are actual islands in the stream
of Puget Sound, & when but a callow
youth I would sit on shore & stare at them,
finally selecting the smallest one for myself,
that I would purchase after becoming a famous
actor & writer. I planned to live on it full time,
in sight of the city, but snug in my own fiefdom.
I would erect a twenty-story tower above the
mansion to use as my writer’s nest--with a
360 degree view & stone parapets. But alas
today it is used by Native Americans for a
tourist salmon-bake stop.

I have never actually climbed Mt. Rainier, but I have spend a decade
circumnavigating it, photographing it, & worshipping its majesty. In my
zoom lens, several times, I have detected fuzzy flocks of huge white
wings--snowbird angels that frolic over the glaciers perhaps? They must
be quite the sight to behold close-up. There are local mountaineer legends
about bizarre encounters with such creatures, who like Sasquatch, have
a dark side as well.

Imagination
transports us beyond what is
real--to fantasy.

Posted over at dVerse Poets "Poetics"

a boundless imagination indeed! Describes you to a T :) The Indian in the wardrobe....how well I remember reading that story with my son. Having camped at Mount Ranier about a year ago, I understand your worship of this grand place. Magical -- so many places are -- can be magical -- if we let our minds roam! :) Really loved your take on this.

Oh I do love the fantasies of Lions in the wardrobe and what you might detect in a zoom-lense if you look carefully. There must be ruby slipper footprints also

Can I please live and visit your writer's nest, what a view of the world it has ~

That is a lot of movies to collect and watch Glenn, a lifetime to watch ~

Thanks for playing along Glenn ~

Romp indeed! Somehow I think we live in the same neighborhood. My husband's closet door is always closed, mine open. He says the unicorns and pirates and jungle beasts keep him awake at night but he knows the door will never be closed. I haven't watched that many movies in my lifetime. But I do have over 2000 books on my kindle. I like this fantasy romp of yours. Better than any movie.

Fantastic imaginative journey you took me on and I can see you life has been filled with creativity and wonder. Love the reference to a number of favorite stories... and yes, I too will join you in the writers nest :)

Wow, you included so many references to some great stories and movies, Glenn...not to mention your own personal day dreams. Loved your fantastical haibun!

This is so good, so many flights of fantasy with allusions to movies. You step outside boundaries of the real and carry us with you. Much enjoyed, Glenn.

"snug in my own fiefdom" made me smile. Oh, to have such a writer's corner of the world.

This is fantastic writing, I too live with ghostly interlopers. I find portals in the most unusual places but, once that portal is open a new world of possibility awaits. It is here I can soar with my dragon or sail the seven seas with my Captain. In this realm anything is possible. Always keep your imagination alive for the greatest stories are the ones we keep safe beneath our ribcage in a place called a HeART.

I love the stanza close to the end that begins, "I live in a miraculous house in a quiet suburb."

Oh how your imaginative mind has sparked such magic in mine. I reread this a couple of times and it just becomes more and more magical! Your "miraculous house in a quiet suburb" is ita own magic.

And there are actual islands in your stream of cosciousness. Your fantasy takes us all over the place and sets off our own explorations.

Wow! I too played with the idea of phantasmagoria! This is like some crazy trip that I got lost in - takes me back to the days when I was reading Carlos Castaneda. The two poems I harvested to create a new one were about the American band Caspian and I made reference to Lewis's wardrobe in one of them.

What a fun romp...except maybe the first flush! A twenty-story towered writer's nest would be amazing but i like the thought of your miraculous house...especially the wardrobe and grandchildren :)

It was great fun and I LOVE it