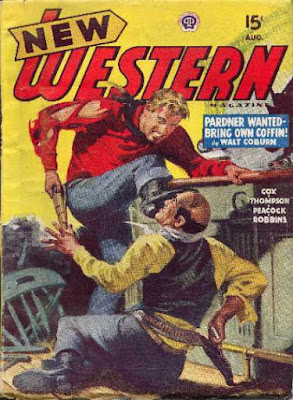 “Come not between the dragon and his wrath.”

2(close-up) a bullet passed through the top of his

and flattened out on its neck.

5(one-shot) the jail door swung open and the Sheriff

staggered out onto the boardwalk, carrying a shotgun.
6(sound cue) Two more shots blasted out of the

shadows over a blues slide chord.

7( cut to wide shot--slow motion) In front of Buck, as he

gallops toward the camera.

The hunter’s steed collapsed under him, its heart

bursting with a bullet. As the horse went down, Buck

kicked out of the stirrups, diving into darkness. He

rolled on his shoulder and landed on his stomach,

peering through the dust made by the gelding’s fall.

8(return to real time) He drew his pistol.

9(cut to crane shot) lights came on in the saloon, the

hotel, and the Wallace’s.

11(medium wide shot) a dark figure raced across the

alley between the saloon and the warehouse. It was

silhouetted against the sun for a moment.

12(close-up) Buck on the ground firing his pistol; the

13(one-shot) The gunman dove onto his face in the

the side of his face, his eyes glazed.

16(one-shot) Buck quickly lizard-crawled up to the

fallen gelding, using it as cover. He holstered his

handgun, and jerked the Sharps out of the carbine

boot. Hop struggled to hold and aim the shotgun.

Cheewa jumped up to the right of the Sheriff.

Startled, Hop snapped off a shot. The big black

dog yelped once as he was hit, lifted up in the

air and landed dead. Buck drew and fired his

pistol. The shot hit Hop in the elbow, and the

shotgun clattered to the boards below. The

up into a bloody heap on the planks, no

longer feeling the chill of the morning air.

the jail porch. The dun mare bucked and tugged

at her wrapped rein. Bullets peppered the ground

around Buck as he scooted. He heard loud, voices

from all quarters. He halted directly under the

horse. She tried to kick him, as he rose up to his

knees, A bullet hit the hitching post next to his ear,

and it felt like a wasp sting. The air stank of death

the rein free, and swung up into the saddle with the

Sharps at arm’s length. He kicked the mare’s sides

toward the flatness of the prairie, into the sun, ducking

into an alley. Dark dust twirled up under the horse’s

hooves as, she galloped into the shadows. A dozen

guns roared behind them, ripping off siding and

talking in her ear, coaxing for more speed.

into the mouth of the molten morning sun as it rose

from its mountain sepulcher, a great flaming maw

that soon swallowed them up, leaving only golden

hoof prints in the cold dust.

Posted by Glenn Buttkus at 6:48 PM

This was packed with action, and I feel sorry for the faithful dog and the gelding... I hope Buck can come back and correct things, but it seems like he has a future as an outlaw.

Goodness such fantastic heart-stopping imagery in this one, Glenn! I could visualize everything from; "horses screaming, doors slamming, people yelling," to "Dark dust twirled up under the horse’shooves as, she galloped into the shadows. A dozen guns roared behind them, ripping off siding and breaking windows." Wow! It looks like Salina is in for the long haul with Buck as he sprints into the mouth of the molten morning sun. 💝 Eagerly waiting to read what happens next!!

Suspenseful. I am in awe of the tightness of your action sequences. Glad to find your site from tonight's OLN.

An action scene if ever there was one! You definitely can't claim 'no animals were hurt in the making of this film!' A fantastic ending with Buck 'sprinting straight/into the mouth of the molten morning sun.'

Another action-packed episode of Blackthorne, Glenn, which started straight away with the shot through the hat and continued at a pace. I like the slow-motion shot of Buck galloping toward the camera, which I pictured in my head, but then my heart sank when the horse collapsed and the dog was hit. I hate it when awful things happen to animals, even if it’s fictional. When will things let up for Buck? He seems to always be in the thick of it.

Where have you been, Glenn? My fb handle got hijacked/suspended and I had to create a new one (Li Jade.) When I read this chapter my heart sinks as Buck (and so many others!) has been victimized by the fat cat's family and now Buck is the one running from the law. I wish he hadn't shot Hop, as there is no way he will be able to rest now. The question in my mind: Will Salina follow him???

gallops toward the camera."

I used to be a Western fan in my teens . I remember how dramatic we thought the above scene was

Wow--chock full of action. (But the animals made me sad, too.)

Yes, dear readers, Buck is always "in the thick of it". I wrote an "existential Western" that trampled on many of the Western cliches. It is not Little House on the Prairie, and it it is not a white hat/black hat typical oater. I wanted the reader to be thrilled, shocked, and attracted to the realistic and adult situations.

Was watching 'A few dollars more' the other night and admiring the fast paced editing - much like this episode of Blackthorne. Am whistling Moriccone's theme as I'm reading this.

It feels like a dramatic ending to Buck's saga...or will there be more episodes? Love your decimation of the cliche "riding into the sunset" :)