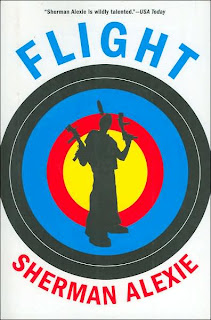 For those of you who have actually not yet read FLIGHT by Sherman Alexie, do yourselves a favor and read it. It is laden with his imaginative and heartfelt storytelling that never misses to be both humane and dystopic, philosophical and poetic. Following is an interview done with Alexie by the Spokane INLANDER in April of 2007. When you read FLIGHT you will think about Kurt Vonnegut and other novelists, poets, and mystics that used time travel to make their various points.


A Wizard of Words

Remember all that "for the want of a horseshoe nail" drumbeat of propaganda alleging that every single one of us — even you, the squirmy doofus who was sentenced to the sunspot magnifying glass horrors of the First Row because your parents found out you couldn't even see the blackboard much less anything written on it, and that's why you're a failure already (break your mother's heart) in the third grade — was an important cog in the mighty workings of the universe?

Well, by that logic, when you go to the Bing on Sunday afternoon, it's because dorky guys pretending to be wizards made Sherman Alexie the writer he is today.
I swear.

He'll even say so.

"Dorky guys pretending to be wizards made me the writer I am today," Sherman Alexie says.

I apologize; there is journalistic license of compression in the preceding sentence. The fullness of the way Alexie says it is more nuanced and funny and heartbreaking all at the same time — just like an Alexie story.

It starts, as many of his stories do, on a trip with his dad, who is dead now. Anybody who's read Alexie's poems knows about his dad, who lives on as the complicated genie of every dad who demands room in the story of any son, sometimes revealing too much and other times not nearly enough.

"When I was in grade school," Alexie begins, "there was a Spokesman story about this hobby shop that used to be right off the Maple Street Bridge, right near that graffiti bridge wall if that's still there."

The newspaper story was all about dorky guys hanging out at this shop playing war games. Somehow this was big for a Spokane Indian boy.

It was mighty... and captivating and important enough that Alexie's dad purchased a Dungeons and Dragons game. Alexie remembers a white box with pieces that were tiny and the text thin.
He held that box in his small brown hands, expectant, all the way back to the HUD house on the Spokane Indian Reservation near Wellpinit. Or maybe the box was in a paper bag, crinkling around on the floor on the passenger side. Doesn't matter; once he got it home, the box held the portent to transform Alexie into the coolest of dudes.

He was already a kid singled out by well-meaning but oblivious teachers as someone who was smarter than you in a universe that stomped the crap out of teacher's pets — even unwilling ones.

"I was always dreaming if I could get a magical sword I could kill all the bullies on the rez," Alexie says.

The slender white box, it turns out, didn't give Alexie the powers he thought it would.

"I could never get anyone on the rez to play," he says. "So I sat in my basement and played hours and hours of masturbatory Dungeons and Dragons."

And here's why:
"It was the story-telling nature of it ... it was the heroics ... it was an escape from a shitty-ass world," he says.

In the classic way of fantasy quests, it was the thing unlooked for that lent the power Alexie still wields.

Dorky guys pretending to be wizards made him the writer he is today.

Oh, this is so Spokane. Free tickets – about 600 free tickets – to attend Alexie's Sunday afternoon reading at the Bing vanished into your sweaty, buffet-tong paws just days after they became available.

Oh, sure, he's big now. Back in the day, it seemed Alexie was reading at Auntie's every five minutes, sometimes the STA schedule, sometimes even opening for people you've never heard of. Like Janet Campbell Hale. (Be honest: Name three of her books.) Where were you then, Spokane?

Once Alex Kuo at WSU helped Alexie forge his voice, it has always had the power to astonish. And Alexie was quick to realize being a good storyteller was not the same as being a good reader and his appearances soon became SRO.

There was that first collection of poems, The Business of Fancy Dancing, that made you wonder how so much laughter, so many tears, such longing and goofiness could fit into such a skinny book.

Then came the short stories, the novels, Hollywood. And the well-documented spiral into "posses" and bling and the seamy underground world of poetry slams where the Mob dictates the winners. (What? Not the cap-M mob?) Never mind.

Sherman's a professor now. Yeah, dig this: at the UW. ("Here I am the Cougar alum teaching for the Huskies ... it's sort of like jury duty for me," he says). You know how white professors grow their hair long and pretend to be Indians or hippies? If Sherman's any example it seems Indian professors cut their hair short to appear to be bankers.

He's 40. He's got the short hair, now. And he's in Spokane as part of a book tour to promote his first novel in 10 years.

And you know he's not going to put on a pair of half-glasses and drone away, occasionally moistening his lips with a damp kerchief. There will be jokes, there will be riffs, improv. Tragedy and accusations. That's why we all went to Auntie's to snag the free tickets. He's a ride, not a reader.

It's cool with Alexie. He understands Spokane.

"When you think about my lifestyle, I am very much Spokane," says the father of two boys who play Dungeons and Dragons in the basement.

"And not the new Spokane," he hastens to add, "I am not the condos in the old Burlington Coat Factory Spokane. I am the P.M. Jacoy where you buy a Swisher Sweet and a pull-tab Spokane."

He was saddened last week at the death of Kurt Vonnegut. Alexie has spent weeks talking about Vonnegut because Flight, a story about the horrors and comedy of a 15-year-old half-Indian foster child who wants to wreak vengeance on the world, uses the same device Vonnegut did when relating the horrors and comedy of fire-bombing Dresden: time travel.

Because he's Sherman Alexie, a major literary figure and an Indian, Flight is getting some rave reviews.

Because he's Sherman Alexie, a major literary figure and an Indian, Flight is getting pummeled.

"This is the first time I've felt like a very large target," he says. And he's not surprised.

Some reviewers, hearing the news Alexie signed a contract to deliver some young adult novels, are treating Flight as one of them. And they're looking down their literary noses. Some are even — God save us — bashing the novel because of its page count (208). That's like pounding Rembrandt because he didn't do more sofa-sized pieces, the bastard.

Others, as they did with Vonnegut, don't know what to make of the sci-fi whiff of time travel.
In a universe that can often withhold such things, there is a nice bit of serendipity. Alexie's editor for Flight was Vonnegut's editor for Slaughterhouse-Five and sent Alexie a gift.

Which sets Alexie off on a riff.

"Native writers are so f---ing literary. We are all professors," he wails. "All these young writers coming up get into teaching. No one is even aspiring to be Stephen King.
"I went to Grindhouse the other night, and I thought, 'Why isn't any Indian trying to make movies like this?'" Alexie asks.

He wants redsploitation flicks and already has the poster — a muscled Indian glaring and glowering. His name is Johnny Fire, and the tagline is: "He's just pissed. ..."

Alexie gets animated: "I have the first scene. A model-gorgeous Indian woman in a flannel shirt with the cut-off sleeves is driving behind some tourists when they hit an elk. Kill the sucker. She jumps out of her truck with a big knife, freaks out the tourists. Runs to the elk, slices it open and looks at the tourists and says 'You got to get the pituitary gland out before it ruins the meat.'"
And of course that's not news to any of us here in Spokane. But it's why Spokane wants to see Sherman Alexie.

Spokane holds a place for Alexie, too.

It's weird, Alexie says, that Dutch's is on one side of Main Avenue in downtown Spokane and that Auntie's is right on the other side. In actual steps it's nothing, but the personal journey is another matter.

"That walk across the street from Dutch's to Auntie's is huge," he says.

I borrowed this article right off Alexie's website, which is a real ride for any of us that enjoy, that live for the next poem, short story, or novel; or possibly film. Sherman Alexie, in his own way, has become a Titan, a literary behemoth, who hibernates within the catacombs of his office up there on Aurora in Seattle. He still has the power to dazzle us, to bring us to tears, to make us sad we are simply white, and not just a smidge Indian. Like Burt Reynolds, I was always told that my great great great grandmother on my mother's side was a Cherokee princess. Too bad she wasn't part of the Salmon Tribe, those infamous Spokanes.