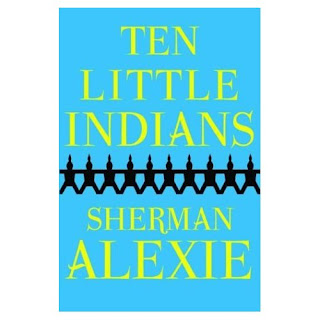 I have just finished reading Sherman Alexie's book THE WORLD'S TOUGHEST INDIAN, and after I turned the last page I always have a small wave of sadness; for Alexie is habit forming. His stories and poetry and essays burst from their pages and pin my ears back, and make me smile and guffaw, and bring me to tears, make me clinch my fists, makes me stare at heaven and raise my hands in exasperation, and they make the old heart in my hairy chest swell to bursting with pride and shame and memory.

In 2003 he was interviewed about his then new book, TEN LITTLE INDIANS. I have just ordered my copy of this book and I am looking forward to reading those ten stories, looking for those parallel characters, plots, themes, and symbols that haunt all his work. Maybe I will find a character named Polatkin, or an old man whose last name is Falls Apart, which Alexie has named his corporation, his conglomerate.

In the following article, published on BOOK PAGE.COM in 2003, he made a statement that just hums and resonates with me, "It's our job. We're artists. We're supposed to be loud and poetic and crass and inappropriate." My God, sir, you have just conducted my anthem, written my Bio, smacked me right between the ears. I love it.

Sherman Alexie explores the sacred and the profane

Sherman Alexie may be one of the most acclaimed writers of his generation. The author of such novels as Reservation Blues and Indian Killer is also a poet and a screenwriter (Smoke Signals, The Business of Fancydancing). Alexie is a literary force to be reckoned with, but he watches "American Idol" like the rest of us. Award-winning authors need downtime, too.

Even while channel-surfing on the couch, his young son beside him, Alexie is doing more than meets the eye. During an early-morning phone call to his home in Seattle, Alexie says, "We've lost old ceremonies and we're casting about looking for new ones. And we don't know yet if they're going to work or not."

Ceremonies like watching "American Idol"? Alexie, a fan of pop culture, says yes.
"There's a hell of a lot of people watching this with me right now, and I thought, well, that's a ceremony, and we can't diminish the importance of that. We still have all those ceremonies, that shared stuff, the rituals, it's just that we don't learn anything through [them], nobody learns anything by watching 'American Idol,' nobody is challenged. Our ceremonies now don't require us to be conscious. That's what they're supposed to do."

Alexie's latest collection of short stories, Ten Little Indians, tells the stories of people in search of the rituals and ceremonies that lend life meaning. They are characters longing for authentic connections with others; they are everyday people, Native Americans, trying to navigate their way through the modern world. Ten Little Indians holds within its pages many journeys, at once ordinary and epic. As Alexie says of his characters, "Everybody's on a religious quest, everybody's a pilgrim."

There is Corliss in "The Search Engine," a student on the trail of an elusive poet, trying to discover her own identity. There is Jackson in "What You Pawn I Will Redeem," a homeless Indian who must raise $1,000 in 24 hours to buy back his grandmother's powwow regalia stolen years earlier. The image we are left with at the end of this story is so stirring and powerful it lingers like an aftershock.

In "What Ever Happened to Frank Snake Church?," the final story in the collection, a once well-known basketball player honors his father's death by obsessively throwing himself back into a sport he sacrificed long ago. Witnessing him work through his grief is, at times, a painful thing to see, but Alexie doesn't go in for tidy resolutions or anything that smacks of sentimentality. "I wanted all these stories to be love stories and not happy endings, sanitized love stories, but the real mess. . . . Love is shaky, and magical, and terrifying," says Alexie.

Though, at this early hour, Alexie is soft-spoken, his tone bears a trace of the raw, bold voice behind his writing. In what is sure to be one of the more controversial stories in the collection, "Can I Get a Witness?," an act of terrorism brings two strangers into an even stranger alliance. Here Alexie, an outspoken peace activist, demonstrates once again that he has the courage to speak his truth, to question long-held beliefs and the status quo. Of this he says, "It's our job. We're artists. We're supposed to be loud and poetic and crass and inappropriate."

Alexie's writing, though provocative, is also funny. "It's the way I look at the world, with humor, and it's not necessarily on purpose. My family is very funny, and in fact if you put my brothers and sisters and [me] together, you find I'm the least funny one," Alexie says. "It certainly is a family way of looking at the world, and my tribe in a sense too; there's a lot of humor. In the Northwest especially, the joke is that if you have a gathering of Native Americans from all over the country, you know where the Northwest Indians are because they're the loud laughing ones."

"I didn't know I was going to be a funny writer," Alexie says. "I just started writing and people laughed. And at first I was sort of offended. I expected, like many young people, that writing was supposed to be so serious—that if people were laughing it couldn't be serious. But I've learned that humor can be very serious. You know if you have people laughing, you can talk about very difficult subjects. I use it as an aesthetic—I suppose I should say anesthetic—and also to be profane and blasphemous. There's nothing I like more than laughing at other people's idea of the sacred."

In Ten Little Indians, as in his other works, Alexie also explores questions of identity, both personal and cultural. Corliss, a latent poet in "The Search Engine" says, "no matter what I write, a bunch of other Indians will hate it because it isn't Indian enough, and a bunch of white people will only like it because it's Indian." Asked if Alexie shares these sentiments, he says that at times he does feel "trapped by other people's ideas of who I am and who I'm supposed to be . . . there are so many ideas about Indians, none of which we created. It's a special situation being colonized people where the colonizers always get to define us—and that still happens."

Asked about Native American culture being relegated to museums, Alexie says, "I love museums, but for me the greatest part of all this is I'm a completely active member of the culture. Forgive the immodesty, but I think it's much more important for an Indian like me to be in The New Yorker magazine than it is for me or an Indian to be in a museum [so that] we join the culture rather than become a separate part of it. It's great to talk about traditions and to see them represented and to get a sense of history, but I think it's more important to change the possibilities of what an Indian is and can be right now.

"We're not separate, we're not removed, we're an integral and living part of the culture."

Sherman Alexie, master of many mediums and a gifted storyteller, is living proof of that fact.

Glenn Buttkus, co-host of this blog, special educator for the blind, ex-actor, poet, unpublished novelist, essayist, progressive, film reviewer, muckraker, malcontent, mental activist, husband, father, citizen, clutz, putz, and Indian wannabe, who is soon to be retired from the drudgery of the yoke, the white collar and the office--lives in Sumner, Washington, that Ozzie & Harriet town just east of Puyallup, nestled at the shoulders of the foothills of the Cascades, in the glidepath for the next mud slide coming off an erupting Mt. Rainier; and he cannot seem to read enough Sherman Alexie or Cormac McCarthy.
Posted by Glenn Buttkus at 5:58 AM