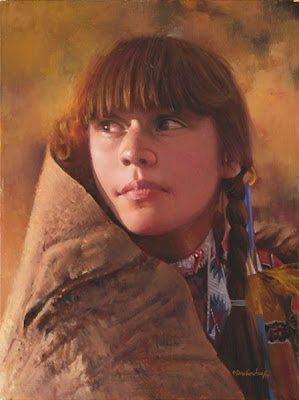 Painting by Don Crowley
Photo of Linda Hogan not available

INTRODUCTION
Widely regarded as one of the most significant contemporary Native American women writers, Hogan is known for her skillful use of metaphors and her ability to transform words into vivid imagery. Her poetry focuses on twentieth-century Native American life, as well as issues concerning women, nature, the global environment, identity, family, and tribal history. In all of her work, Hogan attempts to reconcile traditional Native systems of knowledge with contemporary life and language.

Biographical Information
Hogan was born in Denver, Colorado, in 1947 to Charles Henderson, a Chickasaw Indian, and Cleona Bower Henderson, a descendant of Nebraska pioneers. Hogan spent her childhood living wherever her father's work took the family. Although she moved often, her father's Chickasaw ancestry and connection to Oklahoma provided her with a spiritual center and a home. While growing up, she continually struggled with her mixed-blood heritage and began writing in her early twenties as a way to reconcile the two parts of her identity. After her marriage to Paul Hogan (whom she later divorced) she moved to the East Coast, where she worked with physically challenged children. She continued to write poetry, and eventually moved back to Colorado, where she attended the University of Colorado at Colorado Springs. In 1978, Hogan earned an M.A. in English and creative writing at the University of Colorado at Boulder. Hogan's first poetry collection, Calling Myself Home was published in 1978. In 1979 she adopted two daughters of Oglala Lakota heritage, Sandra Dawn Protector and Tanya Thunder Horse. Hogan has received several prestigious awards, including the D'Arcy McNickle Memorial Fellowship at the Newberry Library in 1980 and the Yaddo Artists Colony Residence Fellowship in 1982. She received a National Endowment for the Arts grant for fiction in 1986, a Guggenheim fellowship for fiction in 1990, and a Lannan Award in 1994. Hogan has taught at many colleges and universities over the years, and has been teaching at the American Indian Studies Program and the English department at the University of Colorado at Boulder since 1989. She has recently served on the National Endowment for the Arts poetry panel and gives lectures, readings, and workshops at both universities and Native American organizations. She has also worked as a volunteer in wildlife rehabilitation clinics in Minnesota and Colorado.

Major Works
Although she is half Chickasaw, Hogan was brought up in a mainly white society and her only experience with her Native American heritage came from visits to her father's family in Oklahoma. Her earlier writing reflects her search for identity and the reclaiming of her Native American roots. Her first poetry collection, Calling Myself Home (1978), documents both her search for identity and the importance of restoring inner unity. In “Leaving,” Hogan asserts her unified self: “Good-bye, divisions of people: … All my people are weeping / when I step out of my old skin.” Hogan's next two poetry collections, Daughters, I Love You (1981) and Eclipse (1983) are influenced by her love for her two daughters. She writes with fear about the fragility of her children's bodies and with hope for their future, and at the same time discusses the fragility of the earth and the need to preserve it for the sake of her children's future. In Seeing through the Sun (1985) she again explores her dual identity and relates to other women and their experiences. In Savings: Poems (1988), Hogan's poetry becomes more thematically diverse and her political vision deepens dramatically. In “The New Apartment: Minneapolis” she confronts racism and poverty and shows how people cope under the onus of these conditions. The Book of Medicines, published in 1993, takes on the theme of healing, both the healing of self and the healing of the pain between people. Her poems are hopeful, as if through her journey to find her identity she is able to see past the strife in the world to reconcile and work toward a peaceful future. Through her words, the healing begins to take place.

Critical Reception
Hogan is highly praised for her ability to capture vivid images of nature in her poetry. Although her earlier poems were met with mixed reviews, on the whole critics are charmed by her imagery and captivated by the realism of her portrayal of nature. Joseph Perisi states, “She vividly brings to life the realities of the natural world, its seasons, and their effects, observed with precision and understood with uncanny sympathy; time and again, she hits the exact metaphor that conveys the feeling of being truly alive. …” Commentators find that she has matured in her poetry, starting out with her own inner struggles and then later expanding to write about the problems that other people and peoples undergo. Her poems are deeply introspective and reflect a great love of her heritage. Reviewers have also found many parallels between her use of maternal metaphors and the Native American ideology of women as caretakers of the earth. Hogan is able to give readers two different perspectives, and critics applaud her for her insight.
Posted by Glenn Buttkus at 11:26 AM