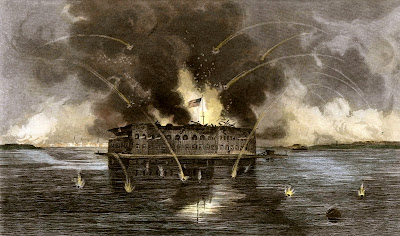 “There is nothing either good or bad,
that thinking makes it so.”
--Hamlet, Act II, scene ii

During the autumn of 1863
when Edwin Booth played Hamlet
at the Charleston Dock Street Theatre,
during his preview tour of the play,

he stood midday on the shores
of the Battery, near where residents
once sat comfortably on their balconies
in the early spring of 1861, applauding
and drinking, saluting the Confederate’s
34 hour bombardment of Fort Sumter,
their bourgeois cheers flattened by
bellicose cannon that assaulted their ears;

the actor staring at the majesty of buried pride,
Sumter, the masonry sea fortification
standing quiet guard out in the harbor,
its fifty foot stone walls and three tiers
of gun emplacements strongly reminiscent
of Kronsborg castle near Elsinore, tying
history, legend and Shakespeare
to the dreary dead hours that lay
like spectral warlike forms, oppressive,
malevolent, blanching the former beauty
of that Southern gem on the coast of Carolina,

hearing the husky voices of a hundred slaves,
their raucous singing pounding out the beats,
one after another, their promised freedom
being raised to the skies as they labored
to rebuild the fort,

thinking “tis strange” how that sea castle
seemed to resonate luck and rebellion
in equal measure, marveling at how earlier
that year Lincoln had sent Admiral Du Pont
with an impressive Union armada
of ironclads, frigates, and monitors,
that sailed in strongly and fired 154 rapid rounds
at the battlements,
answered by an angry parle
of Confederate powder, a serious smote
of over 2,000 rounds illuming that part
of rebel heaven, quickly forcing the Union Navy
to entreat the Southern forces to allow them
to paddle wounded and burning back out to sea.

Without being a Civil War scholar, Booth
was keenly aware of the September 1863
Union Naval assault on Fort Sumter,
that unfolded itself into a complete fiasco,
where 400 sailors in 35 boats were
easily repulsed by fewer Southern liegemen,
high above them, killing sailors at will,
while not suffering any casualties themselves,

making him stand in awe of this military fort
named after a Revolutionary War general,
now in the shadow of the Citadel, shining,
rebellious, a clenched fist thrust effectively
into the underbelly of every Union force
sent against it.

His large British pocket watch struck twelve,
breaking the military magic of the moment,
and as he strode tall toward Dock Street
and an afternoon repast, Hamlet’s speeches
were beginning to resurface, readying him
for the play’s matinee that day.

Years later, in 1865, while Booth played Hamlet
to great success at the Winter Garden Theatre
in New York City, he found out that Fort Sumter
had never surrendered, that only after
General Sherman had conquered Charleston
did the defenders depart their Jutland keep.

Posted over on Shawna's flipside records
Posted as well over on dVerse Poets, OLN

Your slight internal rhyme really jumped out at me in the first couple of stanzas:

It goes on, of course, throughout:
near/dreary
beats/freedom ... And so on.

Love this:
"tying
history, legend and Shakespeare
to the dreary dead hours that lay
like spectral warlike forms, oppressive"

I love the sound in this: "a clenched fist thrust effectively"

And also these:
"and as he strode tall toward Dock Street
and an afternoon repast, Hamlet’s speeches
were beginning to resurface" (kind of builds excitement)

"did the defenders depart their Jutland keep"

What an interesting piece, Glenn. Thank you so much for sharing this.

nice....really cool write and love the story telling as well..of course teaching history right you got up my interesting pretty easy and other thoughts of our history flowed in as well...really cool rhythm as well which carries this along...i really like the perspective in this as well from booth...an observer...

Quite honestly, I could curl up with an entire volume of your work on a rainy Sunday afternoon and call it paradise. It is the return of the storyteller...you MUST have entire novels...seriously...where are they!? Ventured to check the prompt, of course I was intrigued...and dare I say, you blew it out of the water?! Awesome post!

Actually Nat, I do have the manuscripts for two novels, written in my late 20's, and mid-30's. BLACKTHORN, an existential Western, finished in 1971, and BAERBAK, a noir detective novel, finished in 1976.

wow Glenn - that was eye-popping to read. you wove the prompt list into this seamlessly and went way beyond (imo). a very intriguing read easily pleasurable on multiple readings. very cool. aloha.