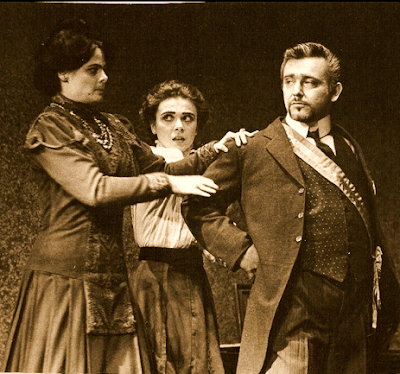 image borrowed from my own album

“An Actor must interpret life, and in order to do so must
be willing to accept all the experience life has to offer.
In fact, he must seek out more of life than life puts at
his feet.”--James Dean

From day one, we three kids
were trooped off by our young parents
to the movies, lots of Saturday matinees--
double bills, plus cartoons and newsreels;

or the three of us in pajamas
in the back of a station wagon
at the Drive-Ins, watching
Westerns, Musicals, & Comedies
between the bobbing heads of Mom & Dad,

eating food my mother had cooked at home,
having a “movie picnic”,
chicken, spaghetti, & pot roast on paper plates,
followed by stale chips & homemade cookies--
no trips for us to the expensive snack bar.

At 12, I was riding a city bus downtown by myself,
and for fifty cents going to the Embassy Theater,
on Third Avenue, 3 movies plus trailers & cartoons.

One memorable Saturday I watched
Clark Gable in BOOM TOWN,
Rudolph Valentino in SON OF THE SHIEK,
& Audie Murphy in THE KID FROM TEXAS--
rapidly developing into a dyed-in-celluloid
movie buff prior to puberty.

No wonder I took Drama classes
in High School, and won “Best Actor” awards;
moving next into Community Theater
working with middle-aged adults who
still felt the call to perform, still had unfulfilled
dreams of careers never pursued,
before I became a college All Star,
jumping into Brecht & Shakespeare
with maximum verve, naivete, & swagger,

But life’s many thoroughfares have several
confusing clover leafs & five-way intersections--
one day in May I took an appealing off-ramp,
traveling toward Education, working with the blind,
and before I realized it, I had set my former
egocentric childish pursuits aside,
as I discovered the genuine adult joy
of helping others, of having legitimate impact
in their lives, of making a difference.

I only rarely look back.

Would you like to hear the author, despite his cold, read this poem to you?

its ok to look back on occassion...there are dreams i lived for a season and had to let them go...and there are greater pursuits...helping others is not a bad one at all..well told bit of your life g....

Hi Glenn, I enjoyed reading your history. Ya, I can remember when we got the first black and white TV too, but it was a bigger one and the only broadcasts began about 4 p.m. and they were old westerns. LOL.

And, yes I remember those drive-in movies too & a person could hardly understand the words from the speakers, and it darned hard seeing over Mom and Dad's head when I was in the backseat.

Anyway, I could go on and on. But it sounds like you had a rich life and found joy, and that is a good thing! Enjoyed your post.

Glenn...I was so moved by your finish...love that you found yourself in helping others...loved that you had such a colorful and poetry worthy journey...and love that you had drive-in picnics...a wonderful memory from my own childhood that still lives on...we've got one still operating an hour away...and every once in a while we find the time to remember the adventure...adding this one to my favorites list :)

Teaching is such a rewarding profession. What a life you've led!

Glen, i love how this goes full circle...and you find yourself arriving back at that place that is so simple, much like the kindness of a child (if that makes sense). I really got a sense in this of our lives being like movies, but ultimately, it is how we see or perceive things, that makes the real difference. Great stuff my friend and i LOVE that term- bioglimpse! this IS one for sure!

Hey, but you did it in the first place and your voice n poetry speak loud n clear. Sounds like you have a big heart.

Very neat path to the growing up, though whenit happened in my life I just called it a secon and third and fourth career. This is a good story.

nice..love the part with the drive in movies..we don't have these over here..think it must've been such a special experience and eating that home made food...cool...cool also on choosing a profession where you were able to help others...thanks for telling a bit from your life glenn

.remember the tv and drive-in well; interesting use of the cloverleaf as a metaphor for life's changes..many times we have opportunities to make choices that we don't even recognize..but when we learn things do't have to be just so or there are other avenues, we find our rewards;)

What a revealing and surprising view into your background, almost cinematic, complete with the requisite twist at the end of the tale. So many have travelled this journey and continue to be disappointed, not knowing that a dream transformed may be a dream fulfilled.

Enjoyed this view into your past Glenn - and congratualtions on finding something to do that is both meaningful and fulfills you. KNowing that you have found that niche is a true moment of growing up.

That was SO COOL you could bring your own picnic!!