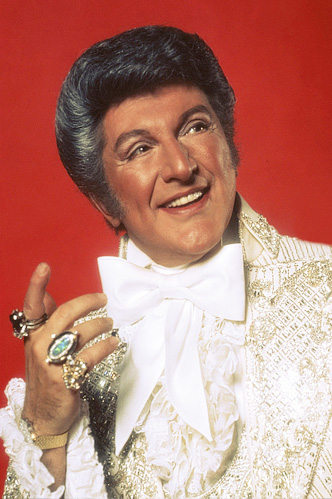 “When the reviews were bad, I just
cried all the way to the bank.”--Liberace

Liberace’s former home in Las Vegas,
once valued at $ 3.7 million, with its
20 rooms, 2 kitchens, & six bathrooms, one
with a Greco-Roman sunken tub, was
just sold to a former fan for the chump change
of $325,000.00, who wants to “fix it up”
& open it to the public, so that those fans
who actually remember Liberace’s awesome talent
& showmanship, and not just some sad flamboyant
homosexual piano player who wore outrageous
costumes, recently portrayed by Michael Douglas
in an HBO movie, & remembering that Liberace himself
tried to be a movie star with SINCERELY YOURS (1955),
but turned out to be just too precious to be asked
to ever make another film--all this as today Celine Dion
listed her Florida Estate at $75.5 million, after
she was awarded for being the Best Female Artist
of All Time, selling 200 million albums, including one
containing the haunting theme from James Cameron’s
TITANIC,

reminding us that on this day in 1907 the Cunard Line
RMS Lusitania sailed on her maiden voyage from
Liverpool, UK to NYC, soon to be overshadowed
by the maiden voyage of the RMS Titanic in 1912
from Southhampton, UK to NYC, the first becoming
a catalyst for WWI, the second becoming legend.

Who could forget that on this day in 1876
the James/Younger gang was shot to pieces
by armed civilians as they tried to rob a bank
in Northfield, Minnesota, the event later being
made into a fair Western with Robert Duvall
playing a bi-polar Jesse, and Cliff Robertson
playing a poetic Cole, but soon overshadowed
by Walter Hill’s classic film THE LONG RIDERS,
with the Keach brothers playing the James boys
and the Carradine brothers playing the Youngers,
to the ass-kicking strains of Ry Cooder’s
six-string slide guitar score, becoming for me
the cinematic apex of that historical moment;

but also on this day the lovely actress Maria Montez,
at only 39 years of age, suffered a heart attack
and drown in her bathtub--the same age my mother
died in 1966, and although she was never actually
called the Queen of Technicolor, she was always
the star of my life’s movie,

and today as Syria looms large in our hearts & minds,
as those Tomahawk missiles are humming at the ready,
even after a bloody decade of war with Islam, having
launched the New Millennium Crusades, as we ready
ourselves to catapult American ordinance, soon followed
by American lives into the growing inferno of religious-
political insanity, even as Iran vows to brutally attack
Americans everywhere if the US hits Syria, certainly
we recall that on this day in 1191, Richard the Lionheart
defeated Saladin at Arsuf during the 3rd Crusade.

Did you know that Buddy Holly was born on this day
in 1936, overshadowed by his death at 23 in a plane crash,
the day the music died as I drove my Chevy to the levy,
making it clear that as each day passes into tomorrow,
it becomes a diverse monument to memory, to history,
to folly, fodder for artists, & the breath of life
for poets.

its interesting when you look at all the things that happen on a given day each year...hope the one that bought liberace's mansion does it well....and syria, i dunno man...the millenium crusades, not sure i have heard them called that, but cool link to lionheart in that as well...maybe one day we can say on this day we had peace, you know...

Once again, Glenn, I come away, more knowledgable, entertained and feeling good after reasding your poetry.>KB

but also on this day the lovely actress Maria Montez,

at only 39 years of age, suffered a heart attack

and drown in her bathtub--the same age my mother

died in 1966, and although she was never actually

called the Queen of Technicolor, she was always

the star of my life’s movie,

Your poem points out that really any day is a very special day. Thanks much. I also liked the parts about your mother especially. k.

So many things happened in history on this day. I was especially interested in Liberace, as my city ALMOST got the Liberace Museum. I remember that, oddly, my father used to like watching Liberace on television. He really COULD play the piano, and his clothes were always fascinating, to say the least.

What a montage, Glenn. My grandmother loved Liberace, and he could definitely play. (Then there's Little Richard, his logical progression.) I couldn't agree with you more on your close--and the whole blood-saturated Crusades motif.Like the way you've personalized all the factoids.

I really appreciate how you tie all this history and your perceptions into a touching memory of your mother. Often I wonder how we put things into perspective and integrate the larger world into our personal sphere. Your poem seems a bridge and an answer.

How odd such things become the breath of life for poets, very nice, thank you.

Glenn, thanks for sharing the interesting facts ~ I have learned that stars fade and a bigger ship will sink in the future so enjoy as much of today ~

Glenn this is totally rockin'

Love the references (yeah the brothers playing brothers in a western) and it was a really cool trip down the timeline of history.

Sometimes I hesitate to read long poems, but never yours as you deliver the goods.

I am not self promoting my poem but I did a post one a short time back that mentions Cole Younger's brother. I had no idea who these gangsters were until I researched a Texas street a fellow blogger mentioned. If you curser down, you will see a link to a free e-book written by Cole Younger himself in 1903 (he wanted to set the record straight, I guess) The photos are well worth taking a peek.

It's a great idea to take everything a given day and write a poem about it... Some days are always remembered, but every day has it's own history. Interesting how you brought us from Richard Lionheart to Liberace...Great read.

I can see it took all that research everything changes
over time? Interesting read,
Thank you so much.