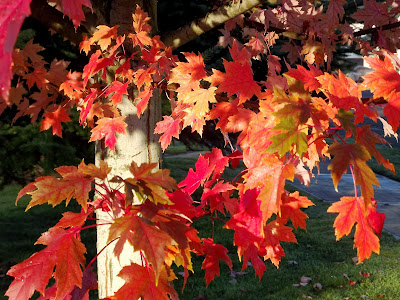 “Just before the death of the flowers, before they
are buried in snow, there comes a season when
nature is all aglow.”--anonymous

I heard them say that it is always better to burn
out rather than passively fading away.

October is a rock star of riotous colors, dramatic
solstice-shifts, and barrels of European ale & beer.

Isn’t it odd that the Gregorians made it their
tenth month, while the Romans used it as
their Octo eighth month, and for the Anglo Saxons
the full moon that month signals Winter to appear,
as the chilly night skies become so clear that
one nearly needs smoked glass to view the
brilliant fields of dead stars.

For those who pay attention to such things,
I got out of the Navy in October 1968, became
engaged in October 1980, and was divorced
from my practice wife in October 1985, and
I might be one of the few people who can tell
you that its birth flower is the Calendula,
a kind of a yellow daisy.

So pull your gear up,
wear your leather thigh-high boots
& Gucci silk scarves, carry plenty
of strawberry lip balm, buy a red umbrella,
and never find yourself without clean underwear
because handsome October is pounding
on the front door, with flames in one fist
& ice cycles in the other, and it does not
give a damn whether you love it or not,
or are actually ready or not--for it has
that autumnal glint in its bright eyes
and extensive exterior decorating
on its mind.

Posted over on Poetry Jam

Would you like to hear the author read this poem to you?
Posted by Glenn Buttkus at 5:09 PM

Glenn, I enjoyed all the October details you shared. I also liked thinking about October pounding on the door with flames in one fist and ice cycles on the other. Yes, that is surely unpredictable October. Glad to see you in Poetry Jam this week!

Sounds like you and October have a love/hate relationship.

Ha! Well, I kind of like October--thanks Glenn for such a fun rundown! k.

October is a rock star of riotous colors...ha i love that...it is for sure in all its glam....did you know Viggo was a poet as well...have heard him before...as is his son....i rather like autumn personally...it is heavy with memory, but i am fine with that...smiles.

ha! Love the rock star of riotous colors and that whole final stanza especially. The bit about European ale & beer made me think of Oktoberfest in Leavenworth...been to it? (I read you're in WA state...me too.)

So much and such an amazing and rich perspective. Two sides of the same coin treasured at once. This is great.

I like your ready-or-not-here-i-come, "flames in one fist & ice cycles in the other" October - indeed a "rock star of riotous colors"... your poem is a wonderful mixture of metaphor & information

I enjoyed reading this. So many interesting details. I like how you wove in so many contrasts--even in arranging the birthday people. Thanks for posting.

" with flames in one fist
& ice cycles in the other, and it does not
give a damn whether you love it or not,"

Yes, October IS a rock star of a month ... razzle and dazzle and then a cold glass of water in the face and moving on to November rains ... love this in your face look at the season.

The fact that I can hear you reat this poem is Wonderful I have never seen that here before.. I loved your writing before I heard it but now it is even more then before...Thanks for reading it to me!