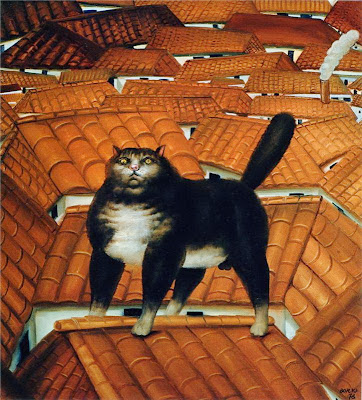 “A catless writer is nearly inconceivable, but it would be
easier to write with a herd of buffalo in the room than
even one cat.”--Barbara Holland.

1(sound cue) Indian flute & a harp.
2(wide shot) a verdant mountain meadow with a beautiful
Indian maiden frolicking in it.
3(crane shot) dolly in quickly to medium shot as the native
American beauty in her white buckskin dress lies in bright
yellow wildflowers.
4(sound cue) soft singing--Comanche love song.
5(medium close-up) the maiden laughing with her head back,
her raven tresses shining with sunshine & blue/white beads.
6(cut to another medium close-up) the prostitute in approximately
the same body position, replacing beauty & grace with
bloat & bovinity.
7(two-shot) Buck & Millie
8(sound cue) saloon piano & tomcat screeching.
Buck: have you ever made love outside?
9(close-up) Millie: what?
--her face a blank stare, not  hearing him, not really seeing
him, not planning on remembering him.
10(close up) Buck: have you ever humped under a jack pine
with a butterfly on your butt?
11(two-shot) over Buck’s shoulder.
Millie: yeah--sure, but I didn’t like it much. Bugs crawl on you.
12(cut to reverse shot) over Millie’s shoulder.
Buck: hell, that could happen in this room.
--Millie forces a giggle.
--Buck stares at her like she was a piece of dead meat.
13(sound cue) violin & harmonica.
14( medium close-up) but tightening the shot as Millie speaks:
Yes, yes--when I was young, still living on the farm. I used to
enjoy riding the rods outside on those long warm summer
evenings, rolling in the wheat grass or hay with the sweet boys.
15(sound cue; VO) Buck: did you ever enjoy it?
Millie:  shit yes--I could howl like a she-wolf in heat & dig my
nails in like a wildcat.
16(extreme close-up) a wide tear rolling down through the
rouge & powder;
Millie: but not for a long time.
17(two shot)
Buck: now you have lots of boyfriends.
Millie: like the damn belle of the ball, sir.
18(sound cue) banjo & juice harp.
19(cut to a reverse two shot) Buck with his back to the
camera struggling out of his leather pants, wearing
a clean red breechclout for underwear; stepping out
of that & standing tall over her, the muscles in his
back & buttocks flexing.
20(medium close-up) Millie’s face, her eyes large, with
a genuine smile blossoming.
21(sound cue) violin’s strident plucking.
22( camera tracking away) from the busy couple, panning
the small room slowly; bright petticoats & corsets poking out
of partly open drawers, the yin-yang teddy bears watching
with their black button eyes, his boots, the gun belt, her
rumpled black gown, yellow wildflowers in a fruit jar, the
water pitcher & bowl, stopping at the open window, a small
breeze tickling the curtains;
23( sound cues running under the images)
--Millie whimpering & forced moaning.
--Buck breathing hard through his mouth.
--bed springs squeaking.
--jazz brushes harmonizing with the bed springs.
--brushing increasing in tempo with the springs, as they
clanked & complained like a weather vane in high wind;
--then Bap comes one loud drum beat, followed by three more,
blending over the top of Buck’s guttural grunting, & Millie’s
real orgasmic scream--& then topping that we hear the eerie
bellow of a bull buffalo.
24(close-up) Buck, opening his eyes, tilting his head, wondering
if he really heard the bison.
25(close-up) Millie, smiling, her eyes still closed.
26(cut to medium wide shot) the white buffalo standing on a ridge
behind Blackthorne.
27(sound cue) six-string guitar chords.
28(cut back to a medium shot) Buck wearing his breechclout, standing
near the open window, his back to the camera, holding a dirty glass
with two fingers of bourbon in it.
29( tighten the shot; dolly up behind him) revealing the roof beyond,
as a large yellow tom cat pads by, pauses for a moment, eyes them
with cat slits, & moves on out of the frame.
30(two shot) Millie getting dressed, Buck turning toward her.
Buck: is that your cat?
Millie: hell, no--he just hangs around here all the time--some of the
girls feed him [giggling] this is a cathouse, you know?
31( cut to a reverse crane shot) POV from outside the window.
Buck leans against the open frame, sipping his bourbon.
Buck: cats are not very tasty--even if you’re hungry.

Posted over on dVerse Poets OLN125

Would you like to hear the author read this Cinemagenic poem to you?
Posted by Glenn Buttkus at 4:43 PM

oh great closing line...full of meaning...the buffalo call made me chuckle at first...nice use of symbolism in the white buffalo though...i know its meaning...smiles. intriguing chapter...

Glenn, this has to be my favorite still of your script poetry... so intense, and very poetic.. love the contrast between Millie and the Indian woman... The white buffalo and the yellow cat almost are set as similar contrasts... and I loved the reading.

Juxtaposition of Comanche girl with Millie was quite a contrast, as was the medicine buffalo and the cat.

Music cues are interesting. Always a different instrument with each, it seems.

haha the cat may just take offense to that

You always leave us hanging at the end, Glenn! Seems like so often your segments end in a bar scene. LOL.

The thing that strikes me most in this are all the different instruments…I can almost hear them in the background as I read the intense poetic script!

Well, Mary, this first section of my "novel" all take place at the saloon; but if I continue the series, lots of other locales show up.

Very refreshing with all the different instruments still ringing in one's ears. Your script writing is one of a rare kind. Obviously it is based on a rich life's experience and lots of thinking made it a fantastic reading. Brilliant shot Glenn!

Love the contrasts of the Indian beauty, & Millie. One smiles and giggles in natural beauty, the other has a fat tear that leaves a track in her make-up. The different instruments really work to set the tone, too. Very skillful work here.

Once again, I could see it, in my mind's eye, the smile, the tear, the buffalo, the cat. A poignant slice of humanity, rife with hidden messages.

Such a great read I had....thank you for that....
Sreeja
writingonjusttowrite.blogspot.com