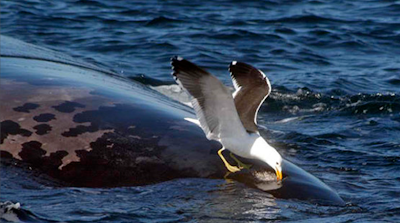 “You have the freedom to be yourself, Jonathan, your
true self, here & now, & nothing can stand in your way.”
--Richard Bach.

Once more, Nature
has been molested by man, forced
to be an unwilling participant in a new
unbalanced oceanic rape scenario.

The Southern Right Whales, reduced
from a population of 50,000 a hundred
years ago, to a modern day population
of 7,000 world-wide--have always
migrated to the warm Patagonian waters
near Argentina, to the Valdes Peninsula,
swarming in large birthing pods near
the bustling city of Puerto Madryn.

Each year 200,000 tourists spend 40 million
dollars, flocking there in July-December
to watch the majestic mammals breach
the water. leaping magnificently into the air,
& then displaying their regal tails;

but these days hundreds of tourist ships
stay tethered to their docks, because
the magical whale watching has become
a horror movie, something out of the
fevered mind of Alfred Hitchcock.

The Kelp Gull population has exploded
during the past few years, since Chubat
province Argentineans have erected
huge open air garbage dumps, & they
continue a policy of tossing fish parts
from local seafood packing plants
directly into the ocean.

Always ravenous, these carnivore gulls
have discovered that they could score
easy meals by attacking the whales;
diving down onto them when they surface
for air, driving their sharp beaks & claws
first into the rubbery flesh, & then tearing
off five foot strips of sweet blubber.

Adult whales suffer hundreds of deep lesions,
but seldom die of the terrible wounds; they
have learned to arch their backs underwater,
only surfacing their blowholes before diving again;

so the real victims are the whale calves, from
2-6 weeks old, with their softer skin, & a tendency
to linger in the warmer shallow waters where
they are fed 25 gallons of floating mother’s milk
daily; being lipless, they cannot suckle.

It is said that the macabre torment of the whales
is a nightmarish dirge, sounding like a punishment
from vengeful gods of the deep. 80% of these
Southern Right Whales suffer from gull-inflicted
wounds, but it is the vulnerable calves that are
dying at an alarming rate.

Argentinean politicians are not suggesting
going green, processing their garbage properly,
or disposing of fish parts more efficiently,
no--

rather they are sending out police patrol boats
with orders to shoot the gulls doing the attacking,
& then dispose of their bodies quickly so that
marine life do not feast on them & ingest
the ammunition as well, further upsetting
the ecological imbalance.

Like the nearly forgotten plight of the drowning
polar bears, this is just another manifestation
of man’s hubris, ignorance, & arrogance;

one day soon the whales will just stop coming,
and maybe the killer gulls will start attacking
people out of their frustration
and madness.

Would you like to hear the author read this poem to you?
Posted by Glenn Buttkus at 5:11 AM

Powerful stuff, Glenn. Thanks for sharing.

ugh...that makes me furious... arrogance and ignorance indeed... and even worse how they deal with it once they found it wasn't as smart as they thought it was...ugh..P§)/$ÜQ§U%$IU

Oh how horrible. I was unaware of this rape of nature. Your account it well-told and should be published worldwide to raise awareness...and translated.

This is shocking.. the news are filled with horrific news .. but this one I had missed.. so sad, and such an important write.

ugh...just another victim of our imperialism...and our being in dominion of all things...its a misnomer... as we are to shepherd...but...ugh...frustrating...sickening...

Alwayus things to be learned from your poems Glenn and in such a pleasantly artistic way. >KB

Powerful write. The human wrath is uncontrollable. What good are they doing killing gulls when the root of the problem infests within our own kind!?
I wonder at your last statement. Well-penned.
-HA

Most unfortunate and a very frightening account.Those big players only think of their own convenience without regard to the adverse consequences. What a pity! Great write Glenn!

It is a profound expose, call to action. Only a start to shift the tide.

What else will you do?

This is indeed a shocking and sad revelation, Glenn. I had not heard of this! (And perhaps wish I hadn't.)

Can't say the gulls would be unjustified in their attack

I'm horrified at what we're doing to our fellow creatures. Why can't people understand that all our life lines are connected. We can't exist alone. Well said sir!

Powerful statement Glenn and I agree the impact man has had on nature is shocking and disturbing that we have contributed so much to the demise of so many.

This is heart braking..... How bad people are..... Its tough to change the mas

Clever nod to Hitchcock at the close...

we kill all of the beautiful things-very sad, I'm glad you bring awareness to them

Killing of whales or any species abhors me. Powerful write, there is nothing more devastating to hear the cries of a whales pup when his mother is missing.

This is so disturbing, Glenn. Wow, I was unaware of this happening. A great rant, but coherent, and thought provoking. Well said. I hope it gets wider coverage. "From little things, big things grow."
I wish you, tho, a Merry Christmas, hoping it is kind to you and yours. And thank you, also, for your support of my fledgling solo poetry, as well as our collaborative OneVoice Poetry. It's very appreciated. x.Vivienne.xxxxxxx