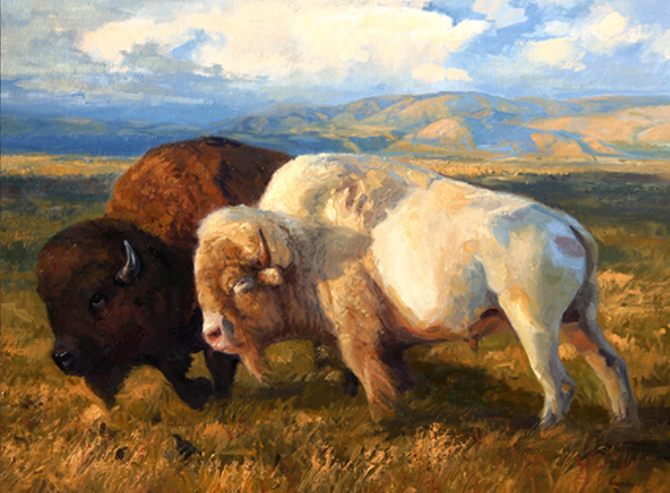 “I always pass on good advice--it’s the only thing to do with
it, for it’s never of any use to oneself.”--Oscar Wilde.

1(sound cue) harmonica.
2(two-shot)
--Barnes: sure, like rats in your grain silo.
--Buck: why doesn’t this town just hire some gunfighters
of it’s own & checkmate Bronson?
3(medium close-up) Barnes: because he’s the one with all the
damn money, the gunslingers, & the politicians.
4(close-up) Buck: and I suppose your crackerjack sheriff is hard
on strangers & easy on Bronson?
5(wide two shot) angle on the barber:
--Barnes: it ain’t that simple. Joe Hopp is from Abeline, and he’s good
with a gun, has a hell of a reputation. I’ve seen him pistol whip several
bad hombres. He is no coward.
--Buck: then what the hell is he?
6(tighten the two-shot) the barber keeps trimming Buck’s thick beard
with his nickel-plate scissors.
--Barnes: careful, I guess, patient--been here a little over a year. The last
two sheriffs didn’t fare too well; one was back-shot, the other went
fishing & just lit out. Hopp is bidding his time. I don’t think Bronson
bought his badge.
7(sound cue) the scissors cutting hair & a clarinet mimicking the squeak.
8(medium close-up) the beard begins to disappear, thick clumps of hair
lying on the barber sheet, a strong cleft chin beginning to be seen.
--Buck: what’s the story on Bronson’s brothers?
--Barnes: he’s got two of them.
9(two-shot) angle on Barnes as he pours some hot water into a fat
black shaving mug, then whipped up some frothy lather from the
soap cube in the bottom.
--Barnes: why do you ask, mister?
10(sound cue) acoustic guitar chord.
11(medium close-up) Buck stares out into the street at the cold-shadow
people moving through the hot dust--and beyond them to the phantoms
of the past.
--Buck: I tossed one of them out of a second story window & I’m figuring
on some trouble coming my way.
12(tight two-shot) the barber begins dabbing the wet steaming lather into
the pepper fuzz that remained, working it in with the brush.
--Barnes: then be smart, ride on.
--Buck: such a friendly town--you’re the second person
in a half hour to give me that advice.
13(hold the two shot) The barber opens a long straight razor
and begins to shave him.
14(sound cue) the scrape of the sharp blade on a face, blended
with a violin mimicking the scraping.
--Barnes: you look like a drifter, just blow back out onto the prairie,
slap leather before we have to bury you in boot hill.
15(sound cue) cello & snare drums.
16(close-up) Buck: thanks, but I think I’ll be sticking around
for a bit.
17(wide two-shot) angle on the barber, the black dog still under
the table watching the door.
--Barnes: plenty of men have tried to take on the Bronsons, our
cemetery is full of them, & old Cash is still the hairy bear.
--Buck: I’ve got roots here.
18(close-up) Barnes: this ain’t the same town you left, son--
your roots are dead & gone for sure.
19(tight two shot) angle on the hunter:
--Buck: Bronson is just a man; he bleeds red like the rest of us.
--Barnes: he behaves like a baron & his army of lead-pushers
is like a twenty-headed Hydra.
20(sound cue) pioneer fiddle bar.
21(medium close-up) the razor makes several passes down his
cheek, & the skin shone both pale & pink. The barber wiped the
lather on a towel over his shoulder.
22(back to the two-shot) over the barber’s shoulder:
--Buck: how’d this town get so dog-fucked?
23( tight two-shot) angle on the barber:
--Barnes: Bronson showed up here about ten years ago, had a
carpet satchel full of money & six men with him. He started out
buying the old ACE DUECE, sprucing it up to become the CHINA
DOLL. He made a fortune, & every year he bought up more of
the town, growing more powerful. He lets cowpokes & strangers
have their fun, takes their money, & then his men escort them
out of town.
--Buck: I’m not a stranger.
--Barnes: so you say.
24(medium wide shot) the barber wipes the straight razor clean,
and sets it in a tray; the shave is over.
--Barnes:  look, I’m an old man--my son tells me I talk too much.
Maybe you work for Bronson, maybe he’s finally decided to shut
me up, maybe you are my assassin. You do stink of death.
25(two-shot) Barnes had spoken calmly, matter-of-fact, without
emotion. He wipes the excess lather off of Buck’s face.
--Buck: I’ve seen more than my share of it.
26(sound cue) coronet & clarinet duet.
27(hold the two-shot) angle on the barber:
--Barnes: Paul is the youngest, a chickenshit tinhorn coward,
he hides behind the guns of the others.
28(medium close-up) the barber returns to the hair-cutting,
running a red comb through the hair, & snipping the ends off.
--Buck: And Thor is the bad ass, right?
--Barnes: Uh-huh, he shot a fifteen year old farm kid to death
right here in the street last month. He ramrods the Triple-B
Ranch, & he sticks to Cash like a foreskin; he is the enforcer,
& the worst of the hired killers would follow him into hell.
29(close-up) Buck: well shit-fire, hell will pop open when
I meet up with that wicked son of a bitch.
30(sound cue) saxophone squawking.
31(medium close-up) Cheewa growls like a grizzly in a
bear trap, and jumps to his feet.

Yes, it is the last Saturday of the month, and Open Link Night is upon us.
Would you like the author to read this Cinemagenic Poem to you?
Posted by Glenn Buttkus at 9:43 AM

here we go1 smiles...nice way to fill in some back story...you've set it up nicely...i have missed this series man...and i am looking forward to my monthly installments now like i used to my comic books....great scene...i like the barber and that he has an inkling it might be a set up but is willing to talk any way...smiles.

barbers and easy girls - they always hear a lot of what's going on in a town... quiet listeners... somehow i'm mondo fascinated by the barber.. ha.. cool story telling glenn...

Ha, I think Buck is right...there will be trouble heading his way. There always IS. Enjoyed this continuation, Glenn.

I feel like I need to catch up on a huge amount of work here, Glenn! It's so rich and creative!

Another cinempoetic classic in the making. >KB

I am impressed by your creativity and dedication, Glenn! I wonder who you'd like to cast if you were shooting Blackthorne.

This was fun to read I always enjoy a good story with inserts of music..Buck: I'm not a stranger..Barnes: so you say..will he be escorted out of town..stay tuned for trouble is on it's way...

I've been missing these installments as well... Love the new setting in the barbershop, learning a bit more about the man behind the gruff exterior, I always knew Buck would turn out to be a deep well.

Ah.. this I have been waiting for a long time.. and still you leave me hanging there in the end... whatever did the mutt see. But i reckon Buck has more steel yet.

Glenn - I am always astonished by your detail and depth of storytelling in each of these 'installments' - wonderful! K

Love your detailed account of an old western scene, Glenn. Buck better watch himself...home town boy or not! Great scene set-ups with the camera angles/shots and music too...fun to read.

I am totally lost here, the screenplay format was too condensed for my eyes, so I tried to listen, but max volume on the computer was insufficient for my old ears to detect any words. I wish you were here to read it for me.

and all the while i was thinking the barber's going to do something with the razor..ha..

I liked the line: this ain't the town you left - your roots are dead and gone

Have you had a screen play published ? This seems like it could work.

No, I have worked on some Indie film projects, writing the screenplays, but they never came to fruition. A "?real" screenplay is a bare bones outline to be put into the creative hands of a director & production time. I break all the literary rules with this Cinemagenic form of poetry, tread on new ground, where I am director, producer, writer, actor, musician, sound man, & cinematographer; such hubris for sure.

One of the things striking me in this scene is how well you write dialogue. I recall reading advice about writing a novel suggesting that we dip into screen-writing to help develop that skill.

This snippet of cinemagnetic has me scrambling to read the other installments!

My first time to read a Cinemagenic. And haven't read or seen a Western in years. Enjoyed your poem.

Love the sound cues and camera views. They anchor me to the story and make it more immersive.

just so admire this series, Glenn. ~