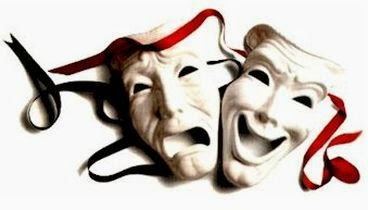 “I have certain kinds of personal secrets that I only let the whole
world in on, just for a moment, when I am acting.”
--Marilyn Monroe.

Every time I watch the SAG Awards,
I imagine myself sitting at one of those tables,
with the cast of some film I was in,
during the opening sequence,
looking wryly into the eye of the lens, & saying:
“I received my SAG card while still in training at university,
working on CINDERELLA LIBERTY. I was in three nice scenes,
none of which were left intact in the released film.
I have been angry at Mark Rydell ever since.
My name is Glenn Buttkus, & I am an Actor.”

I was a callow star-struck youth,
in love with the movies in the 1950’s;
bitten by the acting bug,
cursed with the thespian virus
after receiving the Best Actor Award in 1962
at Sealth High School.

I envisioned myself as a modern Thespis,
who won the first Best Actor award in Athens
in 535 BC, essentially inventing Theatre
as he toured the country, carrying his masks,
costumes, & props in a horse-drawn wagon.

I was absolutely positive, after following
several of my acting friends to Los Angeles,
taking up residence in the ghetto heart
of Hollywood, not very far from the
ornate famous iron gates of Paramount Studios,
that I would set the movie world on fire
with my incredible enthusiasm; armed with my
SAG, AFTRA, & Equity cards,
my talent was inexorable,
my professional training impeccable,
my ego was a behemoth, &
my energy was inexhaustible.

But, alas, poor Yorick,
the flights of angels did not recognize me, for
the Theatrical & Film establishment was unimpressed,
not amused, cold, condescending, ignorant, crass,
littered with half-wits & homosexuals; & so, as the story goes,
the blazing comet of vocational pursuit that I rode upon,
streaked across Griffith Park & crashed & burned
not far from the Hollywood Sign,
& the observatory
where the rebel never found his cause,
where James Dean pretended to have a knife fight.

But, what the hell,
I did have a decade of actually pursuing my dreams,
& no one ever has taken that away from me.
I just had to find another way to be alive, another dream--
like being a teacher & working with the blind,
yeah, I could do that. 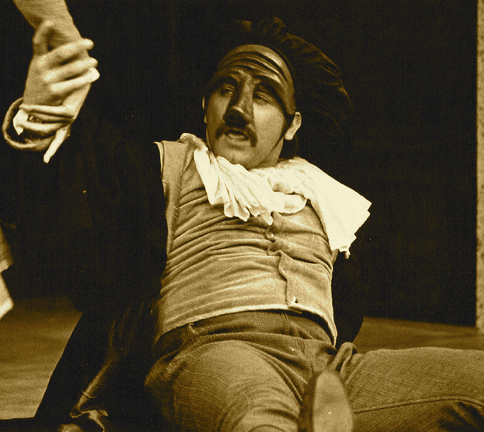 My apologies to Claudia for taking her dVerse prompt & pushing the poetic
envelope, taking the 10 nouns & verbs, & expanding them exponentially.

Glenn, you are a very lucky man to have had ten years pursuing your dreams. No one can ever take this away from you. I suppose many think they will set the world on fire at some point, but not many really do....but that doesn't mean the experiences in the meantime are not worth while. Really, I think sometimes it just takes a 'lucky break' in acting. There are many good actors out there who never made the cut; just as there are many writers out there who never broke through either. Heck, i am a co-author of two novels that should have 'made it,' but never mind.... Oh, a claim to fame for me is having had Willem Dafoe in class when I was student teaching. Smiles. Actually he was in his VERY first play in the 6th grade classroom with me. I cast him in the row of the king in Schaherazade. Smiles.

Oh, and don't apologize for breaking the 'rules.' I thought I followed the rules exactly, but come to find out somehow the rules got changed & I'm out there on a limb looking stupid, oh well, that's life. Have a good day!

i think it's wonderful when we can do what we love to do - and certain things maybe work only for a while and we have to find sth. else - but yeah - no one can take that away from us...

A dream like that is a worthy pursuit - and what a great teacher it must have made you - stars to that. I think one of huminaties great strengths is the ability to find new dreams.

You chased that dream and then caught it. So few can say that. And now you use it for yet another purpose. Somehow, I think your acting may spill into your teaching and your students are the benefactors of that. I think you have won an award, many times over. This poem is an excellent sharing of yourself.

I would say, a victory in the end.

You wrote a fascinating account of a switch from dream to reality with Claudia's prompt, Glenn. Good teachers are also actors to a certain extent so I am sure you were a great one.

Millions of people right now, are around your age wondering "what if?" the fact that you gave your dream the time and nourishment it needed is an accomplishment within itself....

I admire your courage to pursue your dreams. You will always carry
those memories and know in your heart you tried. I do think that actors and musicians have a lot of competition and sometimes it is about being at the right place at the right time.

Being a teacher for the blind is an amazing profession as you touch so many lives in another way.

I like it when you break the rules Glenn..

You are lucky to have pursued your dream Glenn ~ No regrets, no IFS, if you have tried your best ~ The show business of acting is very competitive and I am sure a lot more have tried & tried, and not experienced any success ~

Have a good week ~

Ah, a very personal and candid write from you. I love the way you describe the blind optimism of youth:
my talent was inexorable,
my professional training impeccable,
my ego was a behemoth, &
my energy was inexhaustible.

And now for the trite response (I just can't shake out the cliches) "better to have loved and lost than never to have loved at all" - but I believe that fits here. Theater, like poetry, is a fire in the heart, a joy in the mind, a catharsis of emotions, and for those of us who love it, there is nothing more.

I was told in 7th grade by a teacher with no training or talent, who seemed to want to kill talent (I learned that later) that I had less ability at theater than anyone she had ever heard "try out". We were given dialogue in an Italian accent. It was terrible accordian grinder English with "eh" at the end of every word. I had never heard it, ever.

I went to every grade, junior high, high school and college play, have supported regional theater, little theaters, big theaters, and attended gala events, broadway shows, spent two weeks in London and saw 11 live performances at the Globe and in the West End, real and close up. I can't get enough of it and as for movies, my collection runs to over 1000.

My son was luckier. His first try-out, he and his brother were chosen as newsboys in Gypsy. Jeff went on to be in Shenandoah with Howard Keel, Sound of Music with Anna Maria Alberghetti, Pippin, and Music Man touring company for a summer before teen growth kicked him out of the shows he was simply offered. He had an equity card but the more he knew of the business, the more jaded he became.

His daughter now has the bug. She is like Jessica Tandy and Vanessa Redgrave on stage. When she is on, the light seems to center on her and shine back out of her. She is such a natural. Yet, her parents don't rejoice in that which saddens me.

Yet I take heart that there was talent in me somewhere that might have bloomed if it had not been cut off in the bud.

I rejoice in you, my friend, and your stories. I am thrilled that you have touched the magic of those stars while completely understanding that the tarnished underbelly of the business beast and the torture it takes to succeed in the carnival of fantasy that is film and theater cut your journey short. You have succeeded at that magic notwithstanding!

Such a cool quote from Marilyn. Wow, Glenn that is quite a true story and being a high school thespian, albeit for only 3 plays, The Desparate Hours and Li'l Abner and Winnie the Pooh) this is very heartfelt. I can understand the deep desire for the stage, audience, to "be" someone else convincingly. My idol was Katharine Hepburn. I'm sure you speak for many who fell through the cracks of the profession, or succumbed to the hypocritical and dark-sided aspects, were not taken seriously, who struggled to survive....who for whatever reason did not end up on Broadway or the movie screen. It had to have been tough to let go of such a wonderful dream with he plus of being recognized for one's art and passion more than the fame and fortune overrides your prose/poem. I did not grow up in the
Seattle schools but know Sealth; I'm betting many remember you as a rising star...."things work out awful funny sometimes,don't they, Deannie?" I can't help feel the synchronicity in this....I read your post right after watching again "Splendor in the Grass"!! I know what you will be thinking while watching the Academy Awards.

Excellent. Doing what one loves, even without fame, is reward in itself. Sometimes it doesn't work out like we dreamed, but still works out quite good nonetheless. Enjoyed your story much, Glenn.

Glenn, I can feel your passion just from this poem alone! One would be lucky to watch you on stage or on the big screens! You're bold and its admirable that you've gone all out to pursue your dreams. All the experiences you've had are yours to keep forever, and these experiences are most definitely more precious than any award.

"My talent was inexorable,
my professional training impeccable,
my ego was a behemoth, &
my energy was inexhaustible."

This is exactly what my brother did after high school. He gave it a solid decade, came back home, and started his own theater company in San Antonio. He and his friends were phenomenal actors, but unfortunately, most talented people never "make it" onto the big stage (whatever that means).

I enjoyed this view into one of your former lives.