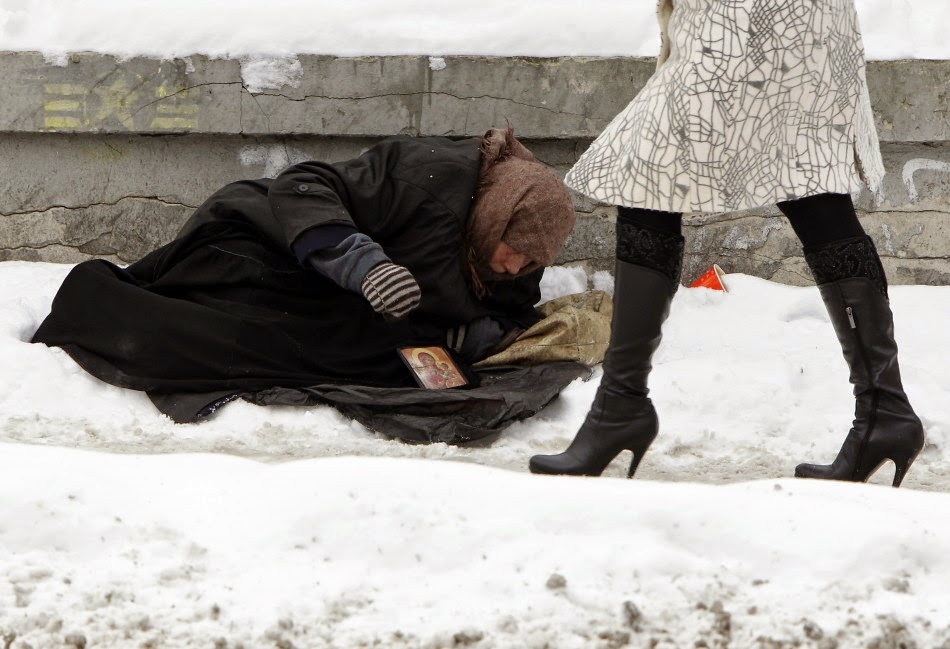 “Genius is an African who dreams up snow.”
--Vladimir Nabokov.

Snow is like scotch--
you instinctually love it or hate it.
A lot of people adore snow,
become impatient waiting for it,
praying for it, doing snow dances,
before playing in it, never losing
a child’s sense of wonder about winter,
using arctic foxes & snowshoe rabbits as their totems.

Descending the stairs
on my snow-covered deck,          I slip,        cracking my tailbone
during my painful journey to the icy sidewalk.

A snowscape looks blissful, beautiful, peaceful on
a Grandma Moses painting,
a Norman Rockwell magazine cover
a Hallmark greeting card,
an Ansel Adams photograph,  or
a ski resort poster, but while

Lying on my back in 6 inches of hard-packed snow
mantling a sheet of ice on the street,
putting on tire chains          so that I can get out of my driveway
& negotiate my side street, only to take them off
in a parking lot before driving on the freeway,
wearing rubber angler’s overalls
to keep my slacks presentable,
the metal on the chains
blistering my bare hands because
my bulky snow mittens were too clumsy--
it doesn’t look too pretty to me.

In the northern part of our state,
near the Canadian border,             the Mt. Baker ski area
holds the world record for accumulated snowfall
at 1,140 inches, or 95 feet.
Skiers & snowboarders consider it Nirvana.

There are over a half million
homeless people in this country         and every damn winter
2000 of them die of hyperthermia
as the polar vortex has its way with them,
partly because the shelters were full,
or didn’t open their doors until the temps
were freezing, so a third of the homeless faced the snow
without any shelter at all.

I wouldn’t say I suffered from Chionophobia,
but it seems that I have always detested snow,
actually dreaming of strangling snowflakes,
all six sides of them, while
spraining my back shoveling snow, or
losing track of my car in the 6 foot drifts created
by the roaring helpful snow plows.

Did you know that snow falls at 3 m.p.h,
that every winter, one septillion snowflakes fall,
(that is one with 24 zeros),
that snow is actually clear & colorless,
that an average snowflake is made up of
180 billion molecules of water?
Neither did I.

Residing, as I do,       hemmed in by two nearby mountain ranges,
with more than half the population nestled
on hillsides, with steep driveways--just 6 inches of snow
turns everything into a tortuous mad carnival ride,
causing thousands of wrecks, injuries, heart attacks
& mental breakdowns.

But the snow gods do not touch me
as much now that I am retired,
sitting warmly in my hovel watching
the traffic snarls only on television,
having the leisure to be haunted
once more by the sepia photos shown to me
by an older friend,
of nude Swedish women skiers,
when I was ten, &
knew very little about women
& still enjoyed snow.

What an unexpected ending! Yes, you're right - snow can be such a pain for most people. And for homeless people winter is a disaster, a race for survival. But I have to admit that Mt. Baker ski area sounds tempting...

Coming from Sweden I have to say --- I have never seen a nude girl skiing.. ha.. but what can I say :-) I mostly like snow, but whenever it comes when I have to work you have all the hassles... and right now I can't take the bicycle to work.. too much of that whitish stuff..

hahah -that nude skier made me smile - goodness... way too cold
i love snow though i admit it's a hassle and we had two people dying in an avalanche last weekend very close to where i live - and certainly for the homeless it's a disaster

wow...95 feet of snow...the bad part about skiing naked is when you fall...the friction is brutal...ha....Bjorn's tourist industry just went up as well...lol....the yin yang of snow...the pain/the pleasure...I still want some...I need to go sledding....ironically it was during sledding one time we discovered my dad's cancer...(I just remembered that)....he had a tumor burst in a sled wreck...

you're right love or hate it... great info regarding snow... i'd send you some, but it'd melt before arrival...LOL

one septillion? I've never even heard of that number... ha. Really, all the homeless people out there who have to deal with the snow is always heavy on my mind during the winter... and as for skiing nude... sign me up!

Glenn, have you thought about moving south? : )

5-year-old boys know too much nowadays, so I'm glad you enjoyed the snow .... and the Swedish ladies.

You have it all - humor, pathos, factoids....sepia prints of nude skiers. Snow can beautiful but so very cruel.

Snow can be brutal. It looks pretty on a picture but its harshness is felt by only those who survive against it in the open.

It is good that you are enclosed within the warmth of your place.

I like how you portray personal feelings and facts both in your verse.

My relationship with snow is definitely love/hate... It gets old pretty quickly. Love the twist at the end, kind of turned this into a poignant piece for me.
Here's hoping spring comes early!

The ending made me smile ha ~ While I appreciate the beauty of winter, I know there are dangers too, like death of homeless and slipping on ice (I got my taste of that too) ~ Lucky for you to just sit and watch us go through winter messy streets ~

Yes, the ending made me smile too. Most unexpected. Nice one.

Glenn, will you send me a link to your Western series...I can't find it! :(

I too have a love hate relationship with snow. Always enjoyed sleigh riding and long walks when all was quite but it gets old fast. Will be glad to see Spring. Nice poem!

Now I want to strangle snowflakes too!

Ha, I try not to let the snow gods touch me either. I prefer to sit and watch it from my window... but unfortunately sometimes I am forced to get out in it to pick up grandchildren. I am similar to you in detesting snow. I didn't as a child, but ever since I started to drive I found NO joy in it at all! I am sorry for those homeless people out in the elements..must be horrible during some of these storms.

Glenn, I like how you mixed facts about winter with your personal experience. I have mixed feelings about winter. I love the pristine view from my window after a snow fall. Nevertheless I also hate slippery roads and sidewalks and am glad I am not homeless.

To enjoy the naked Swedish female skiers less than the snow.. is certainly a child's delight that sees innocence in nature all 'round..

By the way.. excellent usage of dichotomy of beauty and the hard reality of systemizing science behind beauty too.. in poetic expression...

And it reminds me of the patriarchal culture.. commenting on 'Tim Tebow' coming out of beach waters.. without ogling the bikinied babes next to him.. with hints of issues about sexual orientation and all of that...

The beach is a beauty and so are babes.. both are nature.. and each can be a problem with drowning in water or love...

But the pain of snow.. can be the beauty of bright watered lights.. as icy water or LovesNOW..:)

I like the Nabokov quote; and def the kid in snow knows nothing of the hardships and hassles of driving in it...the mittens and gear to stay dry..what one goes through - even dangerous falls and more..just to get somewhere..perhaps now that we are retired we can get some of that 'snow is fun' sense of wonder mode back, though I doubt we'd be trying to sled down a steep hill...love your rant.

How well you paint the dichotomy of pleasure and pain that is snow. Snow is for children, in manageable doses, not in Mount Baker feet and inches!