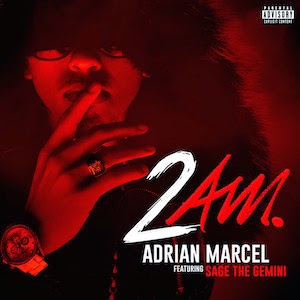 Five nights in
a row I was awakened
at 2 a.m.

Someone was softly saying my name,
like Sheldon repeatedly pounding on Penny’s door--
a female voice--Glenn, Glenn--Glenn.

I blink away the gauze of sleep,
staring at my electric digital clock,        red numbers on a black face,
a tiny white noise gently whirring in the slit of night light;
always 2 a.m., exactly, & there never
is anyone there.
The night is never silent;
I can hear               the freezer & refrigerator keeping things cool,
cats scurrying after rats,
train whistles as the freight is hauled through town,
as forty boxcars slap at the iron rails,
the old house creaking as ghosts dance upstairs,
someone walking in heavy boots over the gravel in the alley,
night birds hunting, courting, & serenading,
an electric garage door rolling open, then shut,
a low rider cruising by with windows down & rap music
playing loudly--love my hoes, mowing down pigs, hug my
niggahs, dancing witch-you,

OK, OK, 2 a.m.--what the hell is the significance?
What’s it all about? I do know that it is
a Korean heavy metal band,
a 1993 jazz album by saxophonist Theo Travis,
a 2014 album by Adrian Marcel.
an Iron Maiden song from X-Factor.
a Teddy Pendergrass ballad,
a Barry Manilow tune from Paradise Cafe,
a song from an Anna Nalick album. &
a 2006 Indie movie about five guys closing down
an Irish Pub in Dallas, a video game, & oh yes,
there is something on Yahoo called the
Drunk Shopping Service that allows insomniacs
to buy all kinds of useless shit at 2 a.m.

But hey, now the clock reads 6:30 a.m. & the dream I am exiting was
macabre & disturbing; my wife had stepped into the shower while a pair
of young Mormons in their black suits & skinny black ties stood in the
hallway, both smiling at me while one played an upright honky tonk
piano, some George Gershwin tune, just as our basement began flooding
despite the ungodly howl of our twin sump-pumps. I yelled at my wife, &
she came out to investigate wearing an evening gown covered with golden
sequins as the water disappeared--Go back to bed said she, & I did, only
to be awakened by someone playing a ukulele, to find seven middle-aged
women telling me they loved my open mic spoken word performances at
the BSharp Coffee House as I headed upstairs to find a half dozen County
Jail prisoners cleaning the rugs & furniture, “I got them from a Work Release
Program,” my wife said on her way out the door to work. “Good Bye, I love
you!” I yelled after her; Good Bye I Love You chanted the prisoners, laughing,
telling me I was pussy-whipped. Then I noticed that one of them was a
chimpanzee.

It’s two a.m. in the
morning, & my mind is just
squirming like a toad.

would you like to hear me read this poem to you?

An Iron Maiden song - nice. Think I still have a couple cassettes around. The older I get the more the Mexican food gets me up at night as well. Hearing your voice softly called - brought back a memory of my youth from that time when the veil draws thin - at 2 or 3 AM. And another from a time I almost fell completely asleep on the toilet when I lost feeling in my legs. Ha. Nice write G.

I like the variety in the different stanzas, Glenn. From the realistic to the dreamy. So very true about the night never being quiet.It is amazing how many noises one can hear while lying in bed TRYING to sleep. One night I heard a coyote killing its prey...now THAT was eerie.

So many surreal images.. I especially like the prose part.. those prisoners where one is a chimpanzee.. I have to say with dreams like that it has to be the Mexican food... I would go for pizza next time..

Mind squirming like a toad....and that is how it is...ghosts dancing upstairs....You captured wonderfully being an insomniac. I think next time, I would settle for a bowl of yogurt or a cup of hot cocoa. From dream to real...a truly twisty write about a truly twisty night.

A Good poem Glenn. I like the shifts in focus and non-focus. A lot to say for 2 AM. Smiles...>KB

Love the reference to Sheldon knocking on Penny's door. And I had no idea there were so many songs called 2 a.m. Finally, the reference to the Mormons in the hall brought back a memory I won't share here, but suffice it to say I found your varied references quite interesting. Peace, Linda

I guess seeing Mormons in my sleep would keep me awake for a while too! I liked listening to all the sounds you mention and all the questions you asked.

I'm just surprised you had the balls to say, "niggas"

You've hooked me with this line break: "Five nights in"

Oh how I love Sheldon.

This piece is visually gorgeous!

"a song from an Anna Nalick album" ~ one of my favorite songs ever :)

"there is something on Yahoo called the
Drunk Shopping Service that allows insomniacs
to buy all kinds of useless shit at 2 a.m." ~ hilarious

I loved your dream.

You my friend are a poetic prophet.
This poem is outstanding! rich and pure from the heart.

You mind is flowing with so much visual truths and the reality of who we are as a species.

HA! What a great piece. Love the flow, the images, the references (especially Sheldon). And since I spring-boarded my poem off of Anna Nalick's lyric, I loved seeing her name in your piece. ;)

Mind squirming like a toad--oh I know that, and not only at 2 am!

At 2.AM, never seem to find the answer to why one is awake... very interesting images!!

Very, very nice! I totally get where you are coming from! Really liked your use of the structure of the poem on the screen. :-)

From what I've seen of your work so far, it is highly and accurately descriptive. In a sense, I'm very glad my 2am is just insomnia, not korean heavy metal bands and the like.

Ah.. the mind of a life on rewind.. a mind that absorbs all still recalled.. ugh.. an escape is what i make as great.. as ugh.. oh my GOD.. this is the mind of
mine i finally lose.. a couple of years ago..
not precisely.. but in general effect
of too much information
running through
'Sting's Head'...:)

Love your poetry, and even more hearing you read it. I'm sure the bit about people loving your spoken word performances is true!

Very interesting night episodes. Dreams can be most revealing of what had transpired during the day.It certainly had been a great day from all the exciting images related! Great write Glenn!

This was my first time reading your poetry and I'm hooked! I love the creative shape and so many beautiful words :)

I love, love, love this one, Glenn. I'm a two AM tea drinker myself. Learned to live with it. Funny though, I think it's the train snaking along the other side of the Truckee that wakens me. In an almost-rural area so no heavy metal or rap. Whew.

Glen, I keep losing what I write before I can post a comment..computer still giving me problems...suffice it to say..I enjoyed your rundown of a night of dreams, deep or otherwise..

really enjoyed this romp of a read.

That is quite the dream sequence!