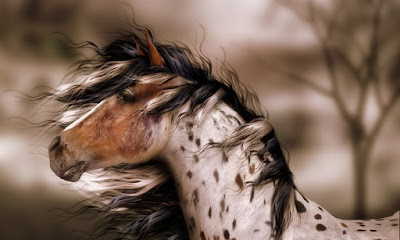 “You will not be punished for your anger--you will be
punished by your anger.”--Buddha.

1(medium wide-shot) Suddenly the galloping white stallion smashed
through a prairie dog city, & stumbled. Johnny Eagle took flight, his
legs pitching over his head, & collided with the ground just after big
Jesus did.
2(sound cue) saxophone, coronet, & drum bap.
3(wide two-shot) Buck reined up his Red, pulling back his head, whose
eyes were bulging, his nostrils flaring, hopping, side-stepping but
staying on his hooves, his great heart gushing, with veins & cords
pounding in his neck & chest, his forearms & gaskins cramping.
4(cut to overhead drone medium wide shot) the Appaloosa running on
alone as the riders halted in a white cloud of dust.
5(close-up) Buck, biting his lip, his blue eyes glinting green.
6(sound cue) Johnny’s loud groan over Indian branch flute:
--Que chingados!
7(medium close-up) Buck raised up in the saddle, standing in the stirrups.
--Buck: Son of a bitch!
8(cut to medium wide shot) as the Appaloosa galloped out of sight ducking
into a deep arroyo.
9(cut to a two-shot ) Buck patting the neck of his horse:
--Calm down, big man, it’s fine--there is always tomorrow.
He swung down from the saddle, dropping the reins on the ground, then
squatting next to Johnny--who was sitting up touching himself on the arms
& shoulders; Jesus was up on his feet.
10(sound cue) guitar chords & harmonica.
11(tighter two-shot) angle on Buck:
--Are you hurt, old man?
12(reverse shot) over Buck’s shoulder, angle on Johnny, out of breath:
--That is the fastest horse I have ever seen in my whole fucking life!
13(sound cue) coronet & galloping hooves.
14(cut to static wide shot) the bare lip of an arroyo, just as the Appaloosa
burst into sight, & then halted; swirls of dust danced around him like alkaline
shadows.
15(tighten the wide shot) He whirled around and stared back toward his
pursuers.
16(close-up) the stallion’s head bobbing, neck arched, long mane flying.
We see the horse is winded & has some sweat & saliva lather on his muzzle.
17(cut back to the two men) Buck helping the Indian to his feet.
--Buck: Piss on that bronc! Did you break anything?
--Johnny: Maybe my ass is all. Ay Caramba--I will be useless as tits
on a fence post tomorrow, just a dozen knots of pain all bitching
at once!
Buck smiled a tight grin.
--Johnny: Ay, that horse, that goddamn mancha devil.
18(medium two-shot) Buck with an arm around the Eagle:
--Today he beat us, stomped us good--but on a different day he
feel our ropes, soon to be lead stud at Antlered Buck. I swear it.
The two men stood there for a moment, as Johnny held onto Buck’s
shoulder--both of them gazing out over the unforgiving salt flats to
the black shadows in the distant arroyo.
--Johnny: You know I think I see him out there watching us.
--Buck: Probably just a trick of the light, wishful thinking.
19(sound cue) Jesus whinnying low over a piano chord.
20(widen the two-shot)
--Johnny: Jesus, you crazy boy, you threw me half a mile.
The silver stallion was standing on three legs, with the right front
one held off the ground. The Eagle knelt next to him, feeling along
the injured leg, examining the new swelling between the knee &
the fetlock.
--Johnny: Damn, you must have been tired, old son, to step in a
hole like that.
--Buck: Do you think it’s broke?
--Johnny: No, I don’t think so. He’s like me, a tough old shit. Yes,
he is bruised, sprained, exhausted & pissed off, just like me.
--Buck: Should we camp here, or do you think he can make it
back to the ranch.
--Johnny: Sure, sure, he can make it, if we go slow & stop a lot.
I’ll ride double with you up on Rojo.
21(sound cue) Blues guitar slide & juice harp thwack.

Posted by Glenn Buttkus at 7:10 AM

Glenn, I see a trio forming, they are a little bit alike the three men and their horse.. wonderful text.. Absolutely gorgeous... I always look forward to what will happen.

Oh, I hope his leg is okay! Tough old shit....I like that. Someone will probably say that about me one day.

You describe the power of the horse brilliantly...his personality shines through. I love the connection that the men have with their horses. Once again, I'm happily entertained.

There are those who say that about me already. I wrote the novel these poems are based on 45 years ago, & coming back to the words, plot, & character now, I can plumb more depths & share more affinity; especially on the recitations.

Love the splendor of the horse :D Gorgeous writing :D

Is it possible to go back to the beginning? I tried to find it but I did not. I really enjoy this.

Thank you for your interest in the series, PS. Just go to the left side of the site, & click on Jan 2015 & look at the poem titles, & you will find the BLACKTHORNE poems. Even earlier ones, going back to episode 1, my be in late 2014 too. Good luck & have fun, binge poetry; sounds cool. There are usually 2 BLACKTHORNEs per month on the OLN.

Wow, I just went back into the archives. the opening scene of BLACKTHORN was in August 2013--how time flies. OLN was only once a month for a time there.

There is always tomorrow - and action continues ~ Enjoyed this chapter Glenn ~

Wonderful - I could completely visualize it. If you could cast it, who would be in it?

When is the things that stood out to me while reading this, Glen, was the way you use action verbs. I would love to see it translated to the screen, but even so you make it come alive.

The creativity you house is undeniable. Another lush write...

And the action continues! Lots of it this time! Wow, 2013, Glenn. I am impressed with how this held your interest for these years!

It's not everyday that you read a poem and feel you've just watched a video... Brings it to life! Awesome.

And the show goes on
Buck.. Johnny Eagle
and a horse who
refuses to
be tamed
named Jesus..
Jesus.. this is
a great story..
and when Cowboys
and Indians come
toGeThEr healing
Jesus at the end..
what a turn
of hooves..
midnight
Cowboys..
Sun rise
Indians..:)

Glenn thank you so much for the kind words on my page. (Not sure if my reply pops back from Wordpress into your email) I wrote the haiku for a prompt on another site. This is the poem I linked to OLN on Dverse,
https://thotpurge.wordpress.com/2015/10/12/questions-in-the-mist/
:)

A horse is powerful and strong! Holds it in silence... Great story here!

Oh, I do hope that poor stallion's foot is all right... You make me really care about that wild and beautiful creature. Your use of action verbs and the combination of images and sounds are unsurpassed.

but on a different day he
feel our ropes, soon to be lead
stud at Antlered Buck. I swear it.

They sure have designs on the stud. At least they are agreed on its potential. Been an old novel, that long?

A pleasure to read. I can feel the characters building from the dialogue and the visuals your create are wonderful.

A novel way of making poetry! Loved it. (and horses).

I think it is cool how the horses are characters along with the men in your script. The horses add such a dimension, too. The interaction between the characters offset by the horses, brings lots of life to your work, Glenn. Enjoyed, as always :)

Love the attitude that the two men have...the house got away, but there's always tomorrow. Wonderfully descriptive as usual!