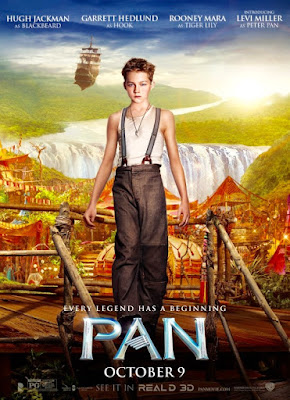 “Do you know why swallows build nests in the eaves of
houses? It is to listen to the stories.”--J.M. Barrie.

In Neverland lie the darkest of paths,
with no white pebbles, & no illumination--
peopled by warring factions; devoid
of any territory, fiefdom, or nation.

A lost island actually, beyond Britain’s shores,
where the more grim a situation, the wider
the grin on every wild boy.

Pan & Hook do make a strange pair,
I grant you, with one embracing hope
& the other despair;

And tis true that every boy in Pan’s posse
has never lost their sense of wonder--
which make them less than reliable
when their focus begins to wander.

There are grieving parents in London
who feel that Pan does nothing more than pander,
indulging the innocent imaginations of stolen children,
leaving their whereabouts but a thing to ponder.

But the boy who was once just Peter; now stuck in time,
cares naught for convention, ownership or parent’s rules;
nor does he worry a whit that there are some who
consider his fellowship with other boys to be naughty.

Just remember that the way is ever clear,
the directions exactly the same every time:
“Second star to the right,
and straight on till morning.”

Posted over on With Real Toads

Posted by Glenn Buttkus at 5:47 PM

Very dear poem. A subject close to my heart - a story I've read to all my six children, and my oldest has played Peter in the play growing up... and now an actor in NYC - he also has three one acts woven about J. M. Barrie's boys and even a few of Neverland... Oh, and I have seen Finding Neverland twice in NYC - fabulous show IMO. I also believe, a man with a bit of Pan trapped inside is always fascinating...

I'll be a Peter Pan fan forever. What a grand description of the iconic character and story. I especially like how you continued Michael's word pairings with a few of your own.

Oops...just to clarify my last sentence, I hadn't noticed that M added a few more pairings to his original list.... Not to take anything away from your own choice of diction.

What a wonderful tale it is.. I never grew up with Peter Pan.. and feel I have lost some dreams I should have kept.. probably too late to add them to my own personal dreamscape...

October is for the imagination, thus a Peter becomes Pan, the Ariel of errant, parent-free boyhood. Such a fun riot here, well-versed in the lore and buttoning with the merriment of a dream. Fine stuff.

Just remember that the way is ever clear,
the directions exactly the same every time

Once he became Pan there was no turning back. He functioned the way expected of him. It was the decision taken that was important! Rightly said Glenn!

Glenn, this is fantastic. You've woven the list words into the narrative seamlessly, and with strength. Sorry for being so late to visit; seems my writing muse missed the 2nd star on the left, and kept going... Thanks for adding your voice to the prompt ~ M