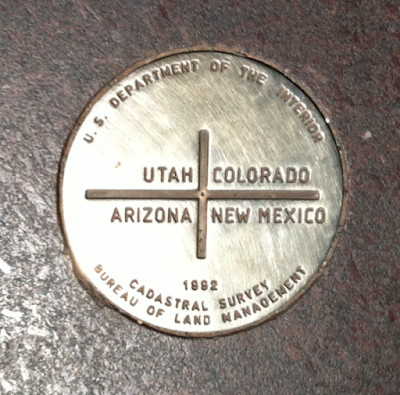 “The farther you go, however, the harder it is
to return.”--Anderson Cooper.

I remember         visiting      the Four Corners Monument,
where the edges of         Utah,
Colorado,
Arizona &
New Mexico
touch,        where a simple wooden platform
was erected over the bronze plaque
representing the latitudinal cross hairs
where the four Southwestern states
go all back to back & belly to belly.
One could straddle the plaque
putting your body in all four states
at the same time, & as your muscles
cramped, & you smiled like you had farted
in a crowded elevator, your companion
could/would snap a photo for posterity.
There were a dozen ramshackle sheds
in the perimeter where the Navajo, Hopi
Apache vendors could sell their Art and
their native jewelry--you know, those
fabulous, clunky, magnificent pure silver
and turquoise necklaces, bracelets &
belt buckles; beautiful & heavy & authentic.

Last summer, after more than a decade, I stopped there again. I was
confronted with a paved road, a gate, and a fee to get in; followed by
concrete parking stalls instead of the dusty ruts between arroyos. The
vendor’s sales stalls were all concrete, like thirty of them, encircling the
monument, & it was obvious that some of their jewelry was made in
China. I had to fight back nausea as I looked down on the imported
junk. The bronze plaque is now sunken into the middle of an amphi-
theater. There were fifty people in a line waiting to snap their pictures
with the cross hairs, with two Indian park rangers herding them.

I’m sure the tribal councils are pleased with the increased revenue
from the new hordes of tourists, but I felt claustrophobic, & in some
inexplicable way--violated--as if a callous slobbering band of bilious
entrepreneurs had smelled profit, & their greed moved them to erect
some faux state park-like Mescalero madness, some crass commercial
carbuncle, destroying & deflowering its former pristine funkiness,
turning a once comely maiden into a trashy painted-up tart. I knew
that I would never need to stop there again, as I was witness to
the demise of the former placid rough-hewn wholesomeness,
and pure Native American Southwest authenticity; those halcyon
memories have all but vanished.

Progress will roll over
us, regardless of our pleas
to preserve the past.

I have passed four-corner once... I never stopped but it was a cold winter night... and through the fog I could see some structures trough the fog... My favorite place to buy silver was in Chinle --- no Chinese stuff there.

Money and greed have a way of ruining the most sacred and beautiful of things. I love your imagery in this. Wonderful haibun. I'd comment more specifically about parts I like, but here on blogger, once I click into the comment box, I can't scroll up to see the poem again for reference (unless I remembered to "open in new tab," which I did not.) Anyway, this is probably one of my favorite pieces of yours.

I remember visiting the Four Corners while in university. Several summers spent at Mesa Verde - university digs, studies....I learned to play the bamboo flute there and once, several of us left our camp and went into a kiva to experience it in silence and the dark. it never left me. Things do change. Not always for the better sadly. But change is inevitable. even the vast mountains wear away.

I feel the sadness and nostalgia in your voice Glenn ~ Such natural beauty should not be ruined by money and greed of the business ~ I would love to visit and see those places, in all its raw beauty ~

Glenn, I have been there (we lived in Rough Rock, Arizona when I was 12, and made it a point to visit everything we could in the area). I LOVE this piece!

I agree with Grace, such powerful shades of nostalgia and sadness in your verse.

Amen! Replacing genuine with greed, never a good thing. The Four Corners is my husband's neck of the woods, so I did visit the monument about 10 years ago. The shape of your poem, the conviction and disappointment so evident in your voice....very effective. Loved it.

Damn, that's disappointing! All change is not for the better of course and certainly not "authentic" Native American artworks that are made in China. I strongly feel the violation too.

Ah Glenn, I can feel the anguish of change. You speak from your heart and it is felt in your words..man has a way of commercializing in the name of greed. I think I would prefer a rustic road and "authentic" seems to have taken on a new meaning. My heart yearns to travel west. Monument Valley especially I want to experience the beauty.

The haiku sums it up so well and I too was reminded of Big Yellow Taxi!

Feeling violated by a memory betrayed to commercialism...I remember my dad lying prone there, grinning, and the simple shacks or blankets on ground featuring artful wares. Excellent haibun!

Your words are always amazing to read, Glenn -- and take me right to where you are. I too have visited this special place -- a good number of years ago and remember it as you've first written about it -- well, not the farting in the closed elevator! :)
But -- I guess I have a different take on this. It is indeed sad that the beauty and quiet of what we saw is no longer there. But my guess is that the Indian tribes gained the rights or had the rights all along but did not realize it, to "build" there and earn money from it. Looking at what "we've" done to native Americans -- I cannot begrudge them the chance to earn moneys from what was taken from them. Okay -- enough of my reaction in this vein. Shift gears to your writing -- which as always, is so descriptive and well done that it provokes reactions rather than ho hum readings. :)

"...crass commercial carbuncle" - That's exactly how I felt. Sadly, I never saw it before it had morphed into just another tacky tourist trap. But I felt the loss you describe nonetheless.

A perfect haibun, Glenn, and a thoroughly interesting read. Thanks!

Very good! I know that sense of violation as we suck the natural out of living in the US!

It is so sad to think of the Four Corners becoming a tourist trap--that's what happened to Sedona. I used to visit the latter when I studied nursing in Phoenix...it was unknown at the time and the energy just overwhelmed.