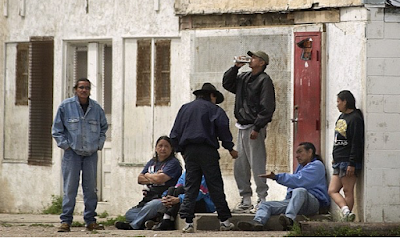 “Love is not enough, but it is the rock on which
all else stands.”--Nora Roberts (Blood Brothers)

A dozen years ago, while working
for the VA, I applied for “Sensitivity Training”
to assist in helping Native American veterans,
and got accepted. We were given a full week off
& were allowed to stay at Camp Chaparral up at
the Yakima Indian Reservation. My wife drove
me up to the Seattle Va Hospital, where
I transferred my duffel bags to government
vans.                         It’s 130 miles, over the pass into Central
Washington, to Yakima. The reservation
is southeast of there, outside of White
Horse. We met up with ten other vans,
sent from several other VA facilities
all over Washington state. We left
in the late afternoon, a dozen white
vans in a caravan rolling up thick
white dust for the 25 mile run up
to the camp, due west to the slopes
of Mt. Adams, deep in the pine forest.

That week was remarkable,
eye-opening & informative,
as we listened to Indian veterans
talk about their difficulties after
Viet Nam & service in Iraq and
Afghanistan, problems with PTSD,
alcoholism, suicide, & sustaining
any semblance of a family life.
I bunked in the Crow’s Nest cabin, hosted by Bob Crow, John
Runningfox, and Harold Bearpaw. During those lovely autumn
days, we attended classes, did nature hikes, tried out the sweat
lodge, & I learned about making Indian art. My talent for drawing
was re-invigorated, & I drew many sketches, giving them away
to tribe members. I met a fellow civil servant, Paul, who was an
artist, & he loaned me art supplies. On the last day they held a
talent show, I got to help host it.

On Departure Day, we all exchanged gifts, hugged a lot, & gave
each other phone numbers & email addresses--we, of course,
vowed to stay in touch. The emotional ordeals & intense sharing
made us all feel very close. I was made an honorary member
of the Yakima tribe, & given the name of Spider. I paid dues
& received a news letter. Sadly, typically, I never did follow up
on any return visits. After two years I quit paying dues, but for
all these years the monthly news letter arrives as a ghostly
reminder. I did, however, stay in touch with Paul, and we have
become good friends.

Indian veterans
have special needs, & I loved
learning about them.

This story fills me with so much of both sorrow and joy. It surely gave you a lot those days, and yet it's so hard to follow up... I think the only way to truly do is to do something, like a project. Thus it is with our writing buddies, we are now into our second book, and yes it seems like we are friends even outside social networks.

You missed the prompts on the Southwest. I included a haibun about an incident and past lover who was Nakota Sioux from the Pine River reservation - read, Wounded Knee. it was eye opening to travel with him to his home and see first hand what we did. Excellent 5-7-5 at the end of the loose haibun - sums it all up wonderfully well.

Exactly what happens..I enjoyed the richness of your details again. I will be here, reading and joining prompts perhaps - but not likely to host again.

This is such a deeply touching story, and sometimes keeping those people in our thoughts is the best we can manage.

I agree, this poem touches the reader to the core.
Beautifully penned.

Entranced by this visit, and its lingering voice. Thank you, Glenn.

Wish more people were exposed to the conditions, which these "Vets" have to deal with. As a trans-woman, who dealing with PTSD, chronic depression and various anxiety disorders, I can understand some of their anger and frustration, they have. Thank you, for sharing this part of your life, with us.

Once again, your eye for detail and specificity grounds your work with a vivid sense of time and place.

I've had a similar experience to the one you write about, having formed intense bonds with the some of the people who were treated with me when I was getting therapy for depression/anxiety. We promised to get in touch and never did-- a familiar story, I guess.

I think there's a kind of reluctance that comes with having formed quick, intense bonds with people when you've met for such a specific purpose, especially if you expressed a good deal of pain, or, really, any kind of deep emotion. There's a kind of embarrassment in the aftermath, isn't there? And then you wonder, if you see each other again, if it's going to bring back all those negative feelings, or whether that connection will still be there in a different set of circumstances, or whether you'll be left sheepish and not knowing what to say.

This one really got to me... Thanks so much for sharing

This was a wonderful narrative, superbly told. I didn't want it to end. By far my favorite image is of you drawing and then giving these away. This is so haunting and sad somehow, and so poetic.

I love your storytelling, and that this is a true story makes it so special. So cool that you drew and then gave your drawings away

It's sad to say goodbye after good times and fellowship. Sometimes time and distance rob us of the beast friendships we've ever known.

And yet that image of the van convoy kicking up white dust is enduring... keeps the memories alive through the dust clouds...

Intense immersions create such strong bonds. With all good intentions to continue communicating, busy lives get in the way. A truism.

I,too, have had intensely emotional times withothers, and was sure that we would stay in contact forever, only to find that they. ..and I... really didn't have enough interest in sustaining the relationship.

Yes, you have told the sotry of many of us, in different situations. xoxo

I tried to send you a thank you for your comments...but it bounced back, permanent error?

Quite an experience, Glenn. I'm glad you took much away from it: the people and the culture, the heritage. Walking a mile in those shoes sound remarkable! Thank you for sharing it!

A WORLD without third
places away from work
and home.. iS certainly a
sad place.. a place for
distance instead
of moving..
connecting
creating
flesh and blood
and although
there are no
more BowLinG
AlleY's.. a place then..
of close to two DecAdes
for me at work wHere
everyone kNew me as
the Bowling Alley man..
there is Dance and Cheers
of the same bar.. and even
Super-Walmart.. as i am the
fixture of the never ending
story noW of the Metro
FL Panhandle
Dance man
at Large..
and jUst
iMagine.. planting
a sMiLe on someone's
face everywHere ya go..
as they jUst wait for the
neXt dance from the
watch of dance
man days..
And that my
friEnd.. is whY i do
not take online seriously..
iT never existed before
iN flesh and blood
and iT still
doesn't
exist that
way for me
and never WiLL..
THANKS GOD..
i feel wHere
REAL HOME
iS.. but sure..
it's a very fancy
piece of paper
to noW write
some pretty
noteS ON..
that WiLL
never
burn
iN
eaRTh
HeLLnow..
So.. alOnE..:)