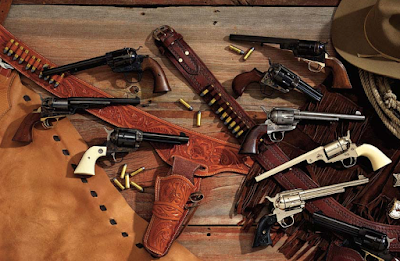 “Big whoop--I had left off the saga at episode 54,
so just a few more reviews will rein us up at current.
Then I will continue the adventure,”

Forty--Six: Allegro. Johnny, “Yeah, Bronson is the one-
eyed king in these parts, but you & the ranch check his
power.” Buck, “Do you worry about the danger?” Johnny,
“Danger? Shit, it has always shadowed me. Do we ever
see the scorpion in our boots? No, that’s why we shake
them out every morning. All I worry about is women,
horses, & fishing.”  Buck, “There’s a small lake above my
north meadow.”  Johnny, “I know. I used to fish it with your
father.”  Buck, “ I almost drown in that damn puddle while
teaching myself to swim.”  Johnny, “Your father used to
call it “Sarah’s Pond of Tears.”  Buck, “Drunks get very
sentimental.”  Johnny, “Bronson has been watering his
herd in that lake for years. If you try to stop him, that
water with writhe with blood.”  Buck, “Maybe not. I could
give him a chance to pay for the water he uses.”  Johnny,
“Good plan. You might even make a good impression on
El Hefe bendejo.”  Buck, “Too true, brother.”  Johnny,
“And how will you share the water after you build up
your own herd?”  Buck, “Yes, let’s talk about my horses.”
*********************************************
Introduction of the Appaloosa stallion, who has a flashback.
He remembers, seeing himself galloping flat out in slow
motion with Crying Wolf on his back, pursued by a small
troop of cavalry, who are firing their Spencers & Colts as
they ride. The great spotted stallion with the red hands
painted on its withers began to out-distance the soldiers
amid a volley of angry bullets. Crying Wolf is hit three
times, & there are two bloody gashes along the horse’s
flanks. The brave opened up his arms, letting out a loud
war whoop as he fell from the horse & hit the ground dead.
The stallion galloped on, lunging like a bull elk, rushing out
of that field of death, with bullets chewing up the ground
near his flashing hooves--their thunderous ricochets
pounding in his velvet ears.

Forty-Seven: Quest-- At first he ran alone out across the
prairie vastness, until the blood & war paint sweated
off him. As a gray-black specter he loped, this equine
dust devil, this grandiose dappled fury. The one day
with the morning dew & whispering wind he cold smell
them--the strong scent of los mestenos, the wild ones.
The stallion bolted & galloped off toward the large herd
of mostly mustangs.---Cut to Buck & the Eagle sitting
atop their steeds. Johnny, “Do you see him? Son of a
bitch--can you see that giant spotted stallion? Buck, “An
Appaloosa for sure. I heard there were some renegade
studs that had run off from the Nez Pierce, but I’ve
never seen one this far east before.” Johnny, “He is a
medicine horse, a real buffalo hunter, like you. He’s
just your size too. He will bring good luck. I can already
see many spotted colts among your new herd.”  The
two men unraveled their lariats, & nudged their mounts
with anxious knees. As the pair rode hard down hill
toward them, the herd burst into action. The Appaloosa
ran point, quickly running on ahead of them. The riders
charged past/through the herd in pursuit of the stallion.
At first they all three ran along together, the terrible
trio of red, silver & spotted studs, all their tails high, their
dozen hooves tearing at the salt flats. But once more,
the Appaloosa began to stretch out a lead. The riders
leaned forward, almost onto the necks of their mounts.

Forty-Eight: Impasse-- Suddenly, Johnny’s white stallion
stumbled, & pitched forward. The Eagle took flight,
somersaulting in the air, & hitting the ground just after
his Jesus did. Buck reined up, watching the Appaloosa
run on alone. Johnny groaned, “Que Chingados.” Buck
stood up in his stirrups, “Son of a bitch”, as the stallion
ducked into a deep arroyo. He swung down from the
saddle & squatted next to Johnny, who was sitting up
now. Jesus was on his feet. Buck, “Are you hurt, old man?
Johnny gasped, “That is the fastest horse I have ever
seen in my whole fucking life!” Buck helped the Indian
to his feet. “Piss on that bronc--did you break anything?”
Johnny, “Maybe my ass is all. Ay, Carumba--I will be
useless as tits on a fence post tomorrow, just a dozen
knots of pain all outshouting each other. Ay, that horse.
that goddamn mancha devil.”  Buck put his arm around
Johnny & said, “Today he beat us, stomped us good--but
on a different day he will feel or ropes. I swear it.
Johnny, “You know, I think I see him out there watching
us.”  Buck, “Probably just a trick of the light.”  Johnny
to his horse, “Damn Jesus, you crazy boy, you threw
me a half mile.” The silver stallion stood on three legs.
Johnny bent down & felt along the injured leg, finding
a swelling between the knee & the fetlock. “That should
teach you not to step in prairie dog holes.”  Buck, “Do
you think it’s broke?”  “No, he’s like me, a tough old
shit. Yes, he is bruised, sprained, exhausted & pissed off,
just like me.”   Buck, “Do yo9u think he can make back to
the rancho?”  Johnny, “Sure, sure, he can make it, if we
go slow & stop a lot. I’ll ride double with you on Rojo.”

Forty-Nine: Intrigue--The two men rode double on the
big Red, with Jesus limping slowly behind them on a
long tether. Buck, “We’ll just poke along with Jesus at
his pace. We may not reach the ranch until after dark,
but I think there will be a full moon.”  Johnny, “Damn,
I feel estupida--almost busted my culo.” Buck, “Consider
yourself twice lucky that no bones were broken. How
do we deal with this horse? Should we hunt him & bring
him down wth a .50 caliber slug? Johnny, “Somehow,
despite today, I have an Apache hunch one day he will
wear the AB brand.”  Buck, “Maybe so, it’s just that
catching him is like roping a daydream.” Johnny,
“I don’t think we could ever run him down, We will never
catch him.” Buck, “Does the Eagle, the maldito wrangler,
give up so easily?”  Johnny, smiling, “Chinga that
notion, my Buck. That great mancha will be yours. It’s just
that we need to trick him, you know, appeal to his cock, &
not stir up his fear & pride.” Buck,“You mean pony express
him--bring fresh mounts for both of us & hop aboard mid-
gallop when our mounts blow out?”  Johnny, “I think that
even with four horses, that spotted stud might outrun them,
or himself, to death?”  Buck, “How then?”  Johnny, “You
know ur stallions are swift, goddamn fast even--but that
dervish ran our studs right into the ground, race over--
& I got the puta bruises to prove it. He runs like a puma
with his prick on fire, like something out of shaman
legend. He gallops like the firewinds. He is Chatawa.”
Buck, “Yes, Chatawa, nothing faster.”  Johnny, “Hey,
we got some sexy brood mares back at the ranch, right?’

Posted over at dVerse Poets Pub
Posted by Glenn Buttkus at 1:57 PM

Yipee - I saw the open link and thought you might post part of Blackthorne. I've been wondering what was going on with this saga. Favorite lines

.” Buck, “Maybe so, it’s just that catching him is like roping a daydream.” "Something out of a shaman legend"...that just made me smile.

This is such a great series.. always enjoy the images, the sounds the smells, the whole atmosphere you evoke.

This is marvellous, the story of those magnificent horses and what it will mean tingle my imagination..

Oh, this had me sitting up Glenn: the introduction of the Appaloosa stallion!, who has a flashback. What a fabulous flashback: 'galloping flat out in slow motion with Crying Wolf on his back' I was relieved when the stallion galloped on, 'unging like a bull elk, rushing out
of that field of death, with bullets chewing up the ground near his flashing hooves--their thunderous ricochets pounding in his velvet ears.' Powerful images!

Wow! This one really evokes strong images and sends you into a reverie ❤

I love how you describe the Appaloosa and his escape from the cavalry - love the description in this! I love this series.