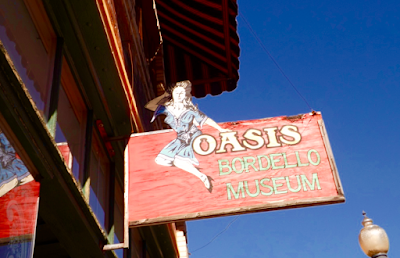 “The company’s good and the mornings are quiet, which
is a good time to write.”--Landlord of a Bordello.

When I was 13
I was on a road trip
with my grandfather & uncle
in the eastern side of the panhandle
of Idaho. It was 1957, and I was big for
my age. Sitting around the campfire
one morning, my uncle got a twinkle
in his eyes & he said, “I’m  going to
take Butch into town. It’s time that
he got bred.”
My grandfather chuckled
and went fishing.

The town was Wallace,
famous for silver mines in the late 1800’s,
tucked into a narrow valley,
surrounded by the Rockies,
straddling the Coeur d’Alene River,
a stone’s throw from the Montana border.

My Uncle was a long haul truck driver,
and he was very familiar with one of
the unique features of the town--it had
five whore houses. He walked me up
to the front door of one of
his favorites--The New Men’s Meat Market.
I was both excited & terrified.

We entered the establishment and
strutted up to a shiny old fashioned bar.
There were a dozen prostitutes sitting around
in black underwear on red velveteen chairs &
love seats. It was ten o’clock in the mo(u)rning.

The wrinkled Madam, with a bright red beehive hair-do,
served Dick a beer, & in a voice that sounded like a bull frog,
said, “Hey, Slick, you realize we don’t do children.”

My randy uncle smiled, shrugged, & handed me his wallet,
before rushing upstairs with a tall blond who had huge
hooters. I sat awkwardly on a soft overstuffed chair that stank
of cologne. Several of the girls made kissing noises, and/or
whispered to one another, holding up their pinky finger &
staring right at me. I felt a blush boiling up in my cheeks.

Uncle Dick came downstairs in just
under fifteen minutes. He pulled up at his
britches, finished his tepid beverage, saluted the
gathering of naughty ladies & pushed me ahead of
him out of the place. He took on
a serious tone as he remarked,
“It’s probably just as well. You
are a tad young to have your
ashes hauled anyways.”

This summer, my wife and I visited Wallace, more than sixty
years after that incident. The last cat house had closed down
in 1989. While I strolled around town snapping pics of
pioneer structures, my wife took a bordello museum tour.
Later, as she recounted the particulars, my grin was wider
than usual.

As hormones rage, most
boys struggle to become men,
and women just smile.

Oh chuckling and smiling I am! Your description is priceless -- and I can just see you sitting there....waiting....and then the blush! :) Fifteen minutes, eh? hmmmm And a great ending!!! To the poem :) Loved it! Thanks for taking me along :)

This was a wonderful tale... what an experience to sit there and being stared at... at 13 they would have hugged me as a baby... I guess it stuck to your memory...

I liked the poem at the end where the women just smiled.

This would make a great short story. I'd love to know more about those trips to Wallace!

Oh, my! What a memory! What a journey!
You retold it so well, I was there, blushing with you!

A travel epic worthy of praise. I can't imagine at 13 being in your place, I would have done more than blush, probably passed out.

At first I wasn't sure where this was going but glad I read it to the very end. Great story and I agree with Kim above - this would make a great short story.

I loved this trip back to your past and the contrast of then and now. I imagine you did sit and blush. When my mom was 16, she and my grandmother moved to San Francisco and somehow she ended up in a bar on the Barbary Coast that was for lesbians. I think her cousin was barhopping and he took her along with him. Anyway, she told us all about it when I was 10. I'll never forget how she described going to the bathroom in the place. It was a hoot.

Ha! This was a fun trip, Glenn.

Hmm.. a trip to a Bordello as a 13 year old..
the closest i got there was when a girl's
mother sat on my leg
in the parking lot
of a school dance..
still not quite sure
why she did that
but she said my
leg was too
hard
and it
hurt her butt..
yeah.. i rode a bike
a lot.. and had no frigging
idea.. what sex was.. even at 15..
yeah.. not surprised all the so-called
cat houses closed down.. i understand
that strip clubs are having a difficult and
hard time finding paying customers too..
since the
virtual
72 Virgins
in Heaven Free
thing is online
24/7.. at least
it deters Terrorists
attacks.. i guess for
empty promises after
death fulfilled in Heaven U.S. oF A..;)

You make me want to know more!! Beautifully haunting :D

I'm not sure if this grin is from joy, or knowing that I was taken on an excellent journey! Either way, thanks for the ride, Glenn!

Now, that's a story and a half.
Crazy stuff went down back in the day...

(Some pretty crazy stuff now, too, I guess.)

Oh Glenn - what a fabulous tale and goodness me - not something everyone has experienced! You told it so well, I felt like I was there too!

Oh my gosh, so relieved that Uncle did not "hook" you up! I thought for sure you were going to say at the end that this did not really happen to you...but it did. And you couldn't make up a name like that for a "house of ill repute" as they say. Loved this so much...poor you though, I could just picture you sitting there blushing all shades of crimson. :~)