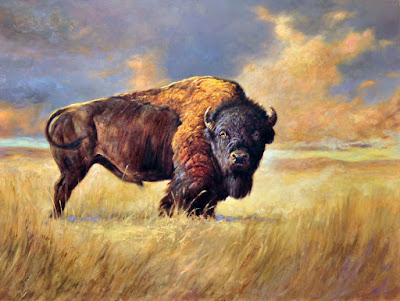 “The greater the obstacle, the more glory in
overcoming it.”--Moliere.

1(sound cue) harmonica & guitar strumming gently
Voice over: Buck: That night the buffalo came again.
2(wide shot) It was after Midnight. The two-story ranch
house stood tall & stark & dark. A large barn
owl chased some bats out of the ajar hayloft door. A
rabbit squealed in the distance as hawk talons ripped it.
To the left & perpendicular to the house, the long
low bunkhouse stood quiet. A full moon lit up the corrals,
cayuses, & rail fences.
3(sound cue) Cicadas, seed rattle, horse nickering, gentle
harmonica huffing.
4(dolly shot) moving toward the bunkhouses”s open door,
as it was a hot night.
5(tighten the shot, traveling over the porch & into
bunkhouse)
6(pause the shot) just inside the door, allowing the
moonlight to brighten enough to make out the big room.
7(travel across the room) toward the opposite wall, Buck
was asleep in a bunk. Johnny slept on the floor, thin
horse blanket partially over him, his head on a light
jacket covering his boots.
8(sound cue) bull bison bellow over French horn.
9( medium close up) Buck rose up in the muggy half-light,
opening his eyes. His face & bare chest were wet
with sweat. He looked down on the floor at the Eagle.
10(angle on Johnny) snoring softly, two of his knives on
the floor beside him.
11(sound cue)horses stirring out in the night beyond
the door.
12(close-up) Buck’s eyes

13(flashback--wide overhead crane shot) 1878, the
Republican campaign. Two dozen buffalo hunters had a
sprawling camp near the river. Just before dawn, the
horizon just beginning to stain the sky blood red.
14(sound cue) murmur, fires crackling, tin ware ringing
metallic, over piano, juice harp & banjo.
15(overhead drone shots) traveling slowly across the
camp, as hunters wolfed down beans, potatoes & coffee.
16(three-shot) a trio of hunters around a fire. Two of the men
were middle-aged, white-bearded & grizzled. Young
Rod Buck squatted with them, holding a new Sharps rifle.
17(two shot) Old Hunter, over Buck’s shoulder : That is a
beauty of a new gun. Do you like it better than your old
Creedmoor?
Buck: You bet your boots I do. The Sharps is the best
buffalo gun there is.
Old Hunter: Perfect time to get one, now that the buffs
are scarce as antelope.
18(close-up) Young Buck: I know--just my damned luck.
We’ve been out of Fort Anderson for two months, &
our slim stack of summer hides don’t pay for our bullets.
19(two-shot) Old Hunter, over Buck’s shoulder:
Remember in ’70 when you first joined up with us?
20(medium close up) Buck: Yeah, we’d sneak up on a
ridge above those vast herds, sink our forked sticks,
aimed into that thrashing, bawling sea of buff, and blast
away for hours. One day we put down a thousand of them,
covered the prairie for a half mile.
21(close-up) Old Hunter: Yup, them was sweet times, the
best of it. Not like now, when the buff know guns, run like
deer, and have to be hunted--the wallows are near empty,
the trails cold. Puts me in mind of returning to my home-
stead, & joining my boys raising cattle & corn.
22(two-shot) Buck: Shut your biscuit-hole. You’re bringing
me to tears. You’d be a piss-poor farmer.
Old Hunter: Well, hell’s bells, right now I‘m a piss-poor
buffman. Right now my left leg is deviling me. Think I’m
gonna’ stay put today, lay up & suck on a jug. You’re on
your own, boy.
23(medium two-shot) Buck stood up, cradled the new .50
caliber Sharps, behind his head, across his shoulders.
Buck: Do what you have to do, old man. You already taught
me every damn thing you know. You’re half-blind & stove
up--probably just slow me down anyway. But it’s a damn shame,
cuz I got this feeling that some buff are out there waiting on me,
calling my name. I’ll bring you a bull tail.
Old Hunter: You talk a good hunt, youngster--and there’s
nothing for it but to get out there & get after it.
Buck: Damn rights.

Oh I do love this one... the flashback gives a solemn image of those times, but also the darkness in killing the buffaloes... Maybe there's a bad consciousness in Buck somewhere. A price to pay for his past?

Oh I do love reading these! But I miss the horse this time!
The flashback is revealing ---- I can't imagine times when "hunters" would just massacre bulls in such numbers that they would fill a field. I don't like this side of Buck here. I hope I'll think more kindly of him next week! :)

The flashback was such an intense and enlightening reading experience! I like seeing this darker side of Buck in this installment. Beautifully done.

Shut your biscuit hole? Suck on a jug?

Now I have to go find out what a juice harp is.

I admire the sounds of your opening lines Glenn ~ The conversations in the end was telling of their relationship; endings and beginnings for the youngster ~

The murdering of the buffalo in such incredible and brutal numbers. Taking away everything the Indians held sacred to their souls and to their livelihood. I did not like Buck at all in this one.

Well I think there's always a lot of genius in your work Glenn. I couldn't do this.

This scene rings pretty true to an old girl who grew up in cowboy country and dated more than a few back in the day. There might be slight differences in speech in different parts of the West for sure. So having said that, I'll throw a few words that sounded a bit tinny to my ear:
"damned" would usually be cut to "damn" (no matter where in a sentence it's used). We dropped all the "g's" on --ing words. (and still do unless we think first) and like the "d" on "old"..likely we'd drag ole and attach it to man..thus "ole-man" (of course, I understand this might come under writing but rather actor interpretation and direction.) and then there's youngster...never heard that growing up, it was always "young-un". Every thing else rings true and are idioms used in Western dialect and since that's so true, I just wanted to note these few things. Forgive me if these are things you already know and have made notes about. You know I truly respect you and your writing, right?

You have a well deserved following, my friend.
ZQ

I enjoyed this episode, Glenn! Sorry I can't comment in more depth but I'm in the middle of marking exam papers.

Ah, I have missed reading your beautifully wrought cinematic scenes. The colors and the sound cues add such a power and force into the already engaging plot. If you ever choose to shoot this, I'd love to be on the set to see your words come to life.
I loved it.

I thought it written well, as usual. I can't help expressing anger at what has been done to the animals and the earth at the time of colonisation and ongoing now. It reminds of Herman Melville's Moby Dick. Going after something bigger than (...) and needing to destroy it.

Interesting term "buffman". It looks like buffalo aren't stupid either. They learn and even communicate what they know to other buffalo.