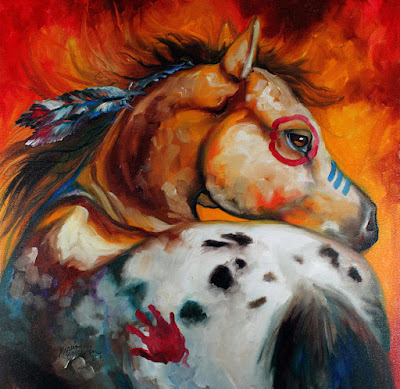 Posted over at dVerse Poets Pub OLN
Posted by Glenn Buttkus at 2:01 PM

I love your quote, Glenn, and the way Johnny speaks to the horse: 'I have oats
for you, and gentle hands'. The horse, too, is gentle, 'chomping at the oats, but
picking them up delicately with his lips' - a wonderful demonstration of the trust between man and beast. What an ending to this scene!

What a wonderful description... you really make me feel Johnny's understanding, the tension between that and Thor's black eyes is chilling... I wonder if he can accept this defeat.

This is so incredibly haunting! This line will stay with me as I ponder over its significance and meaning; "A man who beats a horse can never understand them."

This is my favorite. I'm in love with Johnny and the stippled stallion. He reads the horse with understanding. This entire scene could be a metaphor for human relations, too. Good to "see" you, Glenn. Hope you are well now.

Man, do I miss reading your work.

This writing of yours is so good and very dark.

A man who beats a horse can
never understand them.

It reminded me of 'Friedrich Nietzsche' when he was in Italy I believe and a policeman wiped the horse and Nietzsche ran towards the horse and hugged him and cried.
Powerfully a good story like always.

I am learning and appreciating this western narrative from your words Glenn ~ Never knew this would be the "gentle" way to break an Indian wild horse ~ Enjoyed this chapter!

Another wonderful segment in this amazing story. You put so much effort into each line and scene and the reader can feel it.

"A man who beats a horse can never understand them"

This is so true, one must understand the spirit of the horse first and befriend that spirit not injure the spirit.

As brilliant as ever, Glenn!

For Decades
i couldn't
Appreciate
Wild Horses
unTil no longer
could anyone ride me..
True
my
Mane
DanCES
And SinGS FreE NoW
unbridled unsaddled Wild
LovE
No
ResTRaiNTS..
oF Riders Gate..:)

Such great fun to read.

This article is very much helpful and i hope this will be an useful information for the needed one. Keep on updating these kinds of informative things.
Computer Technical Support for PC

I love to visit your blog. I really find amazing posts here, you have written very nicely this post. Thanks for sharing this post.
Hotel in Ranchi