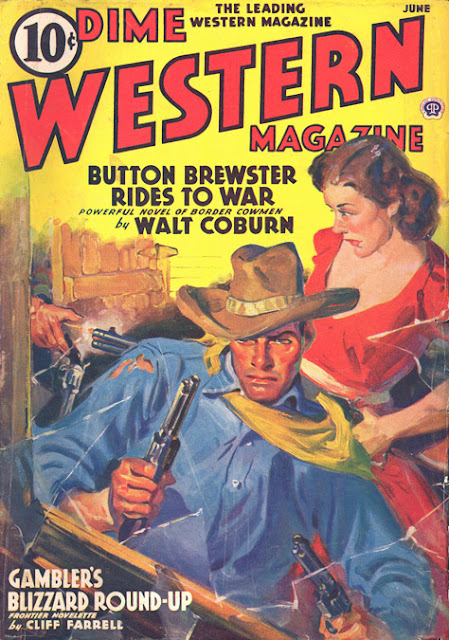 “Turnover is how high you bounce when you
hit bottom.”--Gen. George S. Patton.

1(sound cue) French horn and snare drum over
the crowd and the band.
2(crane shot--wide pan of the crowd) Tension swam
through the smokey air. The dancers never stopped.
The music kept squawking from the end of the room.
3(cut to medium close-up) Thor turned slowly:
Hop, you’re getting pretty damn big for your boots.
The Sheriff: They still fit alright.
4(four-shot) Johnny Eagle: Hey, Peno, are you
brusco? Do you actually want to start a fight?
5(medium close-up) Thor, with his lips curled back:
A greasy halfbreed, a fucking runt sheriff, a guy that
smells like buffalo shit, and a father that mixes sand
with his sugar--I’m so happy for you, Salina!
6(sound cue) saxophone squeal and drum bap.
7(two-shot) over Thor’s shoulder, Salina slapped him
very hard. He slapped her right back, and she
slumped into Buck’s arms.
8(steadicam wide shot with panning--jump cuts)
Paulie used a blackjack behind Hop’s ear, knocking
him down. Wallace went for Thor--Thor blocked the
punch easily. Two burly ranch hands jumped on Johnny,
pinning his arms behind him. Buck still held Salina, but
maneuvered her to a nearby chair. The music and the
dancing stopped. People were open-mouthed and silent.
The deputy stood with his arms folded on his chest.
9(tighten the shot) Paulie now had the sheriff’s pistol,
pointing it at Buck: Should I blast his liver out, Thor?
10(sound cue) Guitar and harmonica.
11(medium close up) Thor: Easy, little brother. I do
agree that this big fellow needs a lesson, but don’t
shoot him just yet. We can do that some other time
12(medium wide.shot) Wallace tossed a glass of
punch in Thor’s face, and lunged at his waist. Thor
collided with Paulie, and his brother dropped the gun.
Buck rushed forward and slugged one of the men
who were holding Johnny. The Eagle used his free
elbow to give the other man a kidney punch. A
pistol shot blasted a hole in the ceiling. The deputy
pushed his way to the combatants.
13(close-up) Deputy: Things are getting a bit
rough here!
14(two shot) Wallace: Damn you, Billy--you did not
try to stop this until we got the upper hand!
Deputy: Appears to me that these two are the ones
having a dispute, and the rest of you are buttin’ in
where you don’t belong.
Wallace: What the deuce are you jabbering about?
Deputy: A fair fight between Thor and Buck.
Thor nodded and Buck smiled.
15(sound cue) guitar and accordion
16(overhead crane wide shot) The crowd came alive.
They helped the Sheriff up, and pushed the tables,
chairs, benches and bales against the walls. Thor
strolled across the open space to the far side.
Several of his men stood all about him.
17(medium close-up) Sheriff Hop stepped into the
middle, his gun regained, and most of his
consciousness: Calm down, folks, rubbing the back
of his neck and giving the stink eye to the Bronsons.
18(two-shot) Paulie was letting Thor take a big pull
from his silver decanter.
19(medium wide-shot) Sheriff: What a treat--looks like
we going to have a main event here tonight. These two
citizens have been at each other’s throat, for one
reason or another, for weeks now.. This is the primary
reason everybody’s weapons are piled on that table
over there. So, what the hell, we’ll let them fight. It’ll
be bare knuckles, everything goes. It won’t be over
until someone gives up, or has to be carried out.
Buck stepped into the circle, flanked by Wallace
and the Eagle.
20(medium close-up) Buck: I keep telling the
Bronsons that we don’t have anything to fight about.
21(voice over) Thor: Go to hell!
22(close-up) Thor: You wanted a fist fight the other
day--skin not iron, remember? You are a big man,
but I will knock you on your goddamn ass!
23(sound cue) guitar blues slide.
24(close-up) Buck: What will it prove?

Posted over at dVerse Poets Pub OLN
Posted by Glenn Buttkus at 2:17 PM

Oh... now it starts... I hope Buck manages to put Thor in his right place... now it's another two weeks until the fight starts. You keep us on the edge.

See you in two weeks. I hope Buck knocks Thor on his ass.

I like the french horn and the saxophone and how they have a place in your work. I try to picture the scene as it happens.

Whoooaaaaaa this is soo good!❤️ The entire atmosphere with its gaping audience and showdown between Buck and Thor is vivid and intense! I can actually picture poor Salina on a nearby chair as the scene unravels and hope Buck kicks his ass and puts Thor in his place!❤️

This is going to be some fight Glenn. Looking forward to the next chapter.

Glenn, I knew you would post so I had to come over to read. Things are getting rough and I hope Buck teaches Thor a lesson or two. Love the guitar blues slide. Always, the perfect instruments for the scenes.

Very compelling read and I love every flourish within it.

This is tense,, Glenn! Thor doesn’t hold back on the insults, does he? What a man, hitting a woman! I’m glad Buck looked after her and let the other guys have a go at Thor first. Buck is obviously not interested in fighting but I hope he puts Thor in his place.

So, I guess I've come to the middle of this story, but quite a confrontation! I have "The Ballad of Buster Scruggs" in mind. ;)

Good point at the end that it would prove nothing. But it would be entertaining.

Yes Buck, great question, what will it prove? Yet on and on human beings wage war. That's what happens when the ego gets too big, and the mind too narrow... and so it goes... these are fun to read Glenn. Wonderfully creative!

You know how to maximize tension in a scene, Glenn! Can't wait to see the main event! :)

Damn, that was great. Completely unexpected and provocative!