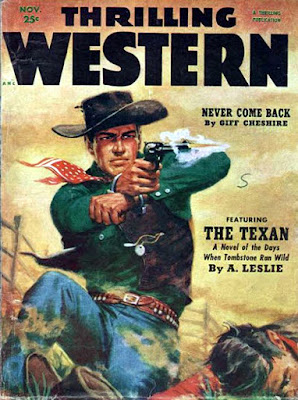 swaying back and forth to keep his balance,

biting a hole in the center of his pain. He

shuffled over to a cupboard near the stove. He

rummaged around in some canned goods, and

came up with a new bottle of whiskey. Returning

with difficulty to his desk, he plopped into his

chair with his broad back to the brick arch.

shooters from their battered holsters, and lay them

all in a line. He checked their loads, their cylinders

spinning and their hammers clicking. He picked up

one of the shotguns and cradled it on his lap. He

bit into the whiskey cork, jerked it out, and spat it

across the room. It hit the steel door, making no

adobe wall. The rough edges of the fresh bullet holes

poked through his shirt. His flat-brimmed hat was

pulled low over his eyes. The cell door remained wide
open. The fancy clock on the northeast wall read

Buck: I wonder how Johnny is?

known. He’ll pull through. I’d worry about myself if

Buck: Fuck you very much, constable.

6(cut back to the Sheriff, close-up) Hop: Not tonight,

sweetie. You better get some shuteye. We will get

on top of things in the morning. I might could swear

ole’ Bob Hart as deputy for a while, and the

Marshall will be here one of these days.

8(cut to close-up) Buck opened his eyes. It was a

blew in from a small barred window. Acrid fog

milling about, a distant rooster crowing, over

Buck walked quietly out of the cell.

12(cut to wide-shot) Hop was slumped over in

his tattered chair. His body rocked gently with

the rhythm of his breathing. His white ex-cavalry

13(close-up) Buck reached into the back of his tight

leather britches, and his hand closed on the snub-

nosed Derringer. He extracted it, and pointed it in

the desk. He was abreast of the stove, three yards

from the sheriff, when Hop said clearly without

looking up: You get your butt back in that cell.

15(sound cue) the clack of a hammer being cocked.

Hop: You bastard! waking up.

Buck: You just sit easy. I don’t want to shoot you. I

figure I owe you for last night.

16(two-shot) Buck moved to within a yard

Hop: I don’t want to get shot again neither--even

with a girlie pea-shooter like that. Where the hell

did you find that?

Buck: In my boot.

Hop responded by pumping a shell into his shotgun.

Buck: Don’t be a damned fool.

Hop: You’re the damned fool if you really think I’m

going to just let you walk out of here.

Buck: Put yourself in my place. Would you be bluffing?

The two men were motionless for a long moment.

Hop dropped the shotgun onto the desk. It clattered

against the Sharps. Hop snarled: You really piss...

Buck struck him on the side of the head.

Posted by Glenn Buttkus at 2:39 PM

This is incredibly atmospheric, Glenn! I could visualize every small detail from "The fancy clock on the northeast wall read 12:30 am," to "Damp air blew in from a small barred window." I was literally on the edge of my seat while reading the exchange between Hop and Buck, it seems as though the latter has either knocked him out (for now) or has gone ahead and shot him. We'll find out soon enough. I enjoyed this one immensely 💝

I have missed a few installments but I can see that Buck is now finally out... though I wonder if it's good or bad... I will have to go back and read a bit more about what happened during the night before it came to this.

You really built the tension in this episode, Glenn, from Hop struggling and swaying, the laying out of the guns, to Buck sitting it out in the cell, clock-watching. I like the way the banter continues between Buck and Hop, and the description of morning sets the scene beautifully: ‘Pewter-gray dawn, those last few moments of darkness before morning usurped it. Damp air blew in from a small barred window. Acrid fog mixed with horse and chicken droppings wafted past him.’ And then the action!

Ah Glenn... As Bjoorn alludes to above, another little atmospheric cameo of delight from you Though I do feel strangely compelled to ask you if you were ver tempted to use the line: 'Fuck you Buck' !! or indeed: 'Buck you Fuck'!!

Well, I guess that puts an end to that particular dance between Buck and Hop.

Wow! That was a tense tense build up to anybody's guess on outcome. You played that so well and left the cliffhanger for the reader to chomp at the bit for what's next. I like how you use the cues and camera shots to enhance what's going on.

This was a great scene. I could picture it all, and you left us wondering what will come next.

An expecially evocative scene! How did I miss Buck getting shot?

Buck was shot in the gunfight at the ranch; no wounds from the gunfight in the China Doll. Salina was finally getting to patching him up.