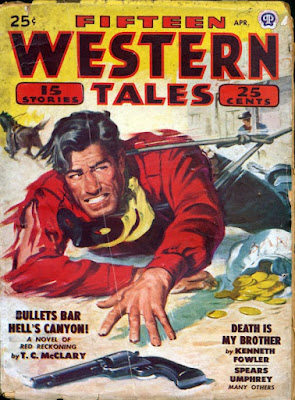 fused bundle of dynamite down the stairs.

2(cut to shot) of the dynamite bouncing and

rolling down the stairs, and landing at Cash

and Bronson swearing. Ten bullets tore up the

edge of the wall that Buck was pressed against.

Then a humongous explosion happened, and the

everything suddenly was acrid smoke and rubble.

3(cut to exterior) as the ranch house exploded, and

a two hundred foot fireball demon rose up through

from hell. Then the air was full of sticks and stones.

4(cut to) a murder of crows fleeing their tree, making

the dark sky come alive with their swarming.

6(cut to) the explosion flattened Buck. He lie there

catching his breath, rubbing his eyes, and

marveling at the cathedral bells clanging in his head,

as the shock wave snarled its way across the front

lawn and raced for the dark timber behind another

Pieces of ceiling were still falling, as Buck under

the cover of stygian black smoke, pushed his way

back into Thor’s room. He logged at a glance that

a lamp still burned brightly perched on a round low

table, that Thor’s bed was made, that a large well-

lie in the middle of the bed with blood splattered all

over it, and that a large window at the east end of

the room was half open.

Buck scattered the glass shards on the picture

frame, cutting his hand. Shaking the frame free of

the glass slivers, he snatched out the sepia-toned

photograph. Salina was wearing a big hat and a

fancy dress, with a low bodice allowing a lusty

set of cleavage to be exhibited. She was smiling,

seared into Buck’s mind like a branding iron, with

Thor holding Salina, both of them naked, then only

crossed in front of the bullet-riddled hole where

once his genitals had been.

Buck tucked the photograph inside his shirt and

rushed to the open window. He heard thudding

boots clumping up the remains of the stairs. He

shoved the shutters all the way open, banging

them on the side of the house. He poked his

shaggy head out into the crisp night air. The sky

was choked with stars. It was a fifteen foot drop

to the ground below.

7(cut to exterior) as Buck swung one leg out, and

shifted his weight. Someone darted past the door-

way, and a shotgun went off. The window over

took flight into the gritty darkness. The Thunderer

barked twice, and the lead chewed through the

wall where the shooter was hiding, and the

projectile found flesh. Someone outside fired at

the window just as Buck dropped out of it.

took flight into the gritty darkness.'

- I love this image: electrifying, like the whole scene! A long time to wait to find out what happens next...

There will be no Bronson left... he really clear it all out. An army of one I think.

Quite an explosion. Buck dropped, so it sounds like he jumped. . .who is going to be left at the end?

It's a credit to your screenwriting skills that I connect with the action even though I missed what went on before. It unrolls cinematically like an explosion itself, and I don't know and want to know if Buck made it! Stay tuned?
pax,
dora

The Bronsons had to keep poking the bear didn't they. I hope the bear leaves scorched earth behind and every trace of Bronson turned to ash. I also hope Buck lives and rides into the sunset with Salina. Not sure how you're going to end this epic but I can hope :)

I would love to see this on the big screen. Seriously! Try to get to Brad Pitt, who owns Plan B Studio. He might be willing to take it on. I could see him in the title role too! Who would you like to see directing this?

Lisa: Brad Pitt does not quite have the stature for Buck. I've thought about Ben Affleck as Buck, and Matt Damon as Joe Hop, with Jennifer Lawrence as Salina. As Director, Ron Howard would do a good job with it, but I'd like to see J.J. Abrams take a crack at it. For fun, I will post my projected cast list in the epilogue.

"Banisters became toothpicks"
I am amazed at how chock full of images your action poem are.
I used to be a huge fan of Westerns in my hometown cinema days☺

Leaving us hanging with Buck once again...
Jack Nicholson would have been great. Too old now.

Action packed -- without having read previous episodes, it's interesting how this scene stands alone and tells a story all its own. Well done..
~peace, Jason

Woh! Very graphic, Glenn! Like a graphic novel. A visual feast, very well-written. Though I hope never to see Thor in such a condition. He is Thor, after all, and does make women melt.