I Hated Tonto (Still Do) 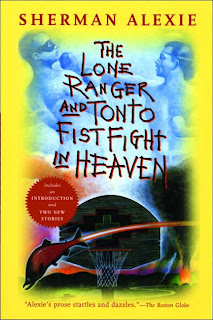 I HATED TONTO ( STILL DO)

Commentary: Sherman Alexie recalls growing up with stereotype movie Indians — and loving them, wanting to be them. (Well, most of them.)

I was a little Spokane Indian boy who read every book and saw every movie about Indians, no matter how terrible. I'd read those historical romance novels about the stereotypical Indian warrior ravaging the virginal white schoolteacher.

Of course, after reading such novels, I imagined myself to be a blue-eyed warrior nuzzling the necks of various random, primitive and ecstatic white women.

And I just as often imagined myself to be a cinematic Indian, splattered with Day-Glo Hollywood war paint as I rode off into yet another battle against the latest actor to portray Gen. George Armstrong Custer.

But I never, not once, imagined myself to be Tonto.

I hated Tonto then and I hate him now.

However, despite my hatred of Tonto, I loved movies about Indians, loved them beyond all reasoning and saw no fault with any of them.

I hated those savage Indians just as much as John Wayne did.

I mean, jeez, they had kidnapped Natalie Wood, transcendent white beauty who certainly didn't deserve to be nuzzled, nibbled, or nipped by some Indian warrior, especially an Indian warrior who only spoke in monosyllables and whose every movement was accompanied by ominous music.

I am always aware of how my whole life is shaped by my hatred of Tonto. Whenever I think of Tonto, I hear ominous music.

I walk into shopping malls or family restaurants, as the ominous music drops a few octaves, and imagine that I am Billy Jack, the half-breed Indian and Vietnam vet turned flower-power pacifist (now there's a combination) who loses his temper now and again, takes off his shoes (while his opponents patiently wait for him to do so), and then kicks the red out of the necks of a few dozen racist white extras.

You have to remember Billy Jack, right?

Every Indian remembers Billy Jack. I mean, back in the day, Indians worshipped Billy Jack. Whenever a new Billy Jack movie opened in Spokane, my entire tribe would climb into two or three vans like so many circus clowns and drive to the East Trent Drive-In for a long evening of greasy popcorn, flat soda pop, fossilized licorice rope and interracial violence.

We Indians cheered as Billy Jack fought for us, for every single Indian.

Of course, we conveniently ignored the fact that Tom Laughlin, the actor who played Billy Jack, was definitely not Indian. After all, such luminary white actors as Charles Bronson, Chuck Connors, Burt Reynolds, Burt Lancaster, Sal Mineo, Anthony Quinn and Charlton Heston had already portrayed Indians, so who were we to argue?

I mean, Tom Laughlin did have a nice tan and he spoke in monosyllables and wore cowboy boots and a jean jacket just like Indians. And he did have a Cherokee grandmother or grandfather or butcher, so he was Indian by proximity, and that was good enough in 1972, when disco music was about to rear its ugly head and bell-bottom pants were just beginning to change the shape of our legs.

We made up excuses."Well, that Tom Laughlin may not be Indian, but he sure should be."

"Well, that movie wasn't so good, but Sal Mineo looked sort of like Uncle Stubby when he was still living out on the reservation."

"Well, I hear Burt Reynolds is a little bit Cherokee. Look at his cheekbones. He's got them Indian cheekbones."

We Indians became so numb to the possibility of dissent, so accepting of our own lowered expectations, that we canonized a film like "Powwow Highway."

When it was first released, I loved "Powwow Highway." I cried when I first saw it in the theater, then cried again when I stayed and watched it again a second time. I mean, I loved that movie. I memorized whole passages of dialogue. But recently, I watched the film for the first time in many years and cringed in shame and embarrassment with every stereotypical scene.

Wait -I was wrong. I know of at least one Indian boy who always imagined himself to be a cinematic Indian warrior. Me.

I watched the movies and saw the kind of Indian I was supposed to be.

A cinematic Indian is supposed to climb mountains. I am afraid of heights.

A cinematic Indian is supposed to wade into streams and sing songs. I don't know how to swim.

A cinematic Indian is supposed to be a warrior. I haven't been in a fistfight since sixth grade and she beat the crap out of me.

I mean, I knew I could never be as brave, as strong, as wiser as visionary, as white as the Indians in the movies.

I was just one little Indian boy who hated Tonto because Tonto was the only cinematic Indian who looked like me.

That was such a good laugh, I loved that essay. Its the same with most stereotypes. This Other side Indian from India has hassles like- always have to be good at Math and Science and Brainy etc.