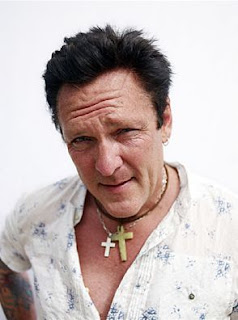 We all have been watching Michael Madsen as an actor for decades. He has been in like 100 films already; many of them great, most of them straight to DVD quality. Somewhere within the boredom of being on the set, and his turbulent life, he began like 20 years ago to write poetry. I bumped into it a few years ago, and was suprised at how much I liked it. He writes with the passion of Bukowski, the irreverance of Ginsberg, and the rogue imagery of Kerouac. Dennis Hopper wrote the forward to one of his books of poetry, saying that he preferred Madsen to Kerouac; that the poetry was more daring, more dynamic and interesting.

As an actor he could have been better than anyone you could name, playing those masculine losers, those bad boys, and even the wide eyed Dad in the FREE WILLY flicks. Those Robert Mitchum droopy lids, that cigarette dangling from his full lips, that wild hair flying in all directions at once, his green eyes, his raspy voice--part Nick Nolte, part Jim Beam; all are his persona, and most of it shows up in his poetry.

I opened the window of my motel room and the December wind
got sucked across the floor under the door of the hallway.
It made an eerie sound. Creepy and slow.

On the TV, they advertised GI Junkie and GI Judas, complete with
back-stabbing action. I'm living to see the destruction of
everything holy, everything hopeful, everything bearded and
everything that ever meant anything.

Christmas has become a media event without consequences. Our
children will suffer long after the snow covered ground

I pour another shot
of vodka
and see my reflection
on the back
of a silver Zippo.

Like a mirror in
an amusement park,
a little crooked,
a little strange.

Never underestimate
the value of a Zippo.

He prefers to write his name, "michael madsen".

At one point Bradley Mason Hamlin interviewed him:

BMH: Is there any city in particular where the whore of the muse speaks to you more frequently or with greater passion.
MM: New Orleans.
BMH: Many people now believe that the terms "poet" and "poetry" are tired and misunderstood words. Henry Rollins refers to his poetry as "spoken words"; but that doesn't make sense as people are reading his words silently on paper. If you had to give poetry a new handle, what would it be?
MM: Inner dialect.

Remember when all the men on the ship said goodnight
to Mr. Roberts, or when
Shane rode off over the mountain?
Kirk Douglas trying for the note on the trumpet.
Jimmy Cagney screaming on top of the tower.
Bob Mitchum going after those kids and
Humphrey Bogart pulling off leeches.
Marlon Brando finding the dead
Pigeons on his roof.
Gloria Swanson walking down those fucking stairs
andBette Davis testing the weight of a rifle.
Chuck Heston finding his mother and sister
andCharlie Bronson getting shot in the Magnificent 7.
Burt Lancaster with his rose tattoo and
Burt Lancaster on Alcatraz.
Kirk Douglas looking at his dead horse in the rain.
Lee Marvin in the Twilight Zone and
Lee Marvin in Point Blank.
Mr. Blonde dancing and
Dennis Hopper with the gas mask.
Steve McQueen laughing in the backseat of a Mercury and
Steve McQueen smiling at the engine
Tim Roth as the only interesting money and
Harry Dean walking and making Paris, Texas.
WatchingPaul Newman eating those eggs and
Paul Newman telling
George C. Scott that he wasn't getting anymore money.
Karl Malden telling Marlon he was going to hang and
Karl Malden telling Blanch and
lighting that bent cigarette on the waterfront.
Jack playing the piano.
Jimmy Stewart loving Donna Reed and
Jimmy Stewart doing just about anything.
Fonda in the dust bowl and
Fonda, Jr. on the motorcycle.
Lon Chaney with a thousand faces and
Lon Chaney, Jr. running around
with Frankenstein in Creature Features
on T.V. in Evanston.

We are all on the run.
From the richest Maharajah
to the lowest, dirty, stinking pedophile.T
he big, the wrong, the last,
the found,the forgotten,
the remembered,
the free and all the long timers.
All on the run,
one way or another.
Yesterday I was the answer to 46 Down
in a crossword puzzle
in the L.A. Times

BMH: Many people now believe that the terms “poet” and “poetry” are tired, misunderstood
He has more than 100 screen credits and has had rave reviews for his poetry... yet he is still best known as the psychotic lobe-lopper from Reservoir Dogs. Sanjiv Bhattacharya talks to Michael Madsen about his two dogs, his three wives, his five sons and how Quentin Tarantino (who else?) is set to breathe life into his brilliant career

Whatever his poems lack in polish, they make up for with stark, evidently cathartic honesty. Take Tuesday, from The Blessing of the Hounds: '
I am lost.
Alone.
And suicidal.
Although not likely to act upon the latter.
/I am some sort of freak.
Admired by other freaks
because I play freaks.'

Yet, though Madsen leans to the dark - he has a machine that plays him storm sounds when he's away on tour - there is levity of sorts. Like his throwaway poem Hammerhead:
'Man, I think the hammerhead shark is the
/most bizarre looking creature I've ever seen./
What is the deal with that head?'

From his poetry, Madsen emerges as a likeable raw nerve - a dude curmudgeon, unprecious to a fault. He is depressed by strip clubs and phoney news anchors and by the fact that people still send the Osmonds fan mail. He misses Sinatra and Joe DiMaggio - any death disturbs him deeply - and he's pretty sure 'acting is not what it's cracked up to be'.

For the most part, his poems are anecdotes - he's a natural storyteller. This morning, he's on a roll, reminiscing about his earliest career in Hollywood right up to the time they found a gun in his bag at Cannes - 'it was only a little .32,' he chuckles. 'They locked me up for a few hours.' He recalls his first job in Hollywood, as a pump jockey. 'My very first customer was Fred Astaire,' he says. 'He gave me a $100 bill to change his tyre. I thought, "Wow, I'm in Hollywood now!"' He remembers his first audition for Thelma & Louise, and how Ridley Scott laughed at him for refusing to play the part of the rapist, and insisting instead on playing Sarandon's loyal boyfriend, Jimmy (it worked).

it is not as if the lights were dim
indeed silver is black
and the day as dark
sitting silently
in a sliver of ray
the sun is whole again
forgotten is the excuse of night
he falls responsibly and the day is dark
floating frightfully
from that of grace
a soul is awake again
blind from that which is love
the prism of shackles and chains
darkness becomes the way
easterly dreams seek shelter
from the weak running from rain ... eclipsed

When asked how he decided to publish his poetry, he said to PREMIERE magazine:

I was gonna build a fire. It was snowing outside and all the f*cking wood was wet. I had this box with all sh*t and I put the f*cking thing in there and I was lighting it up, and she grabbed it and she took a few pages out and started reading it... And she goes: "Michael, Michael, you really shouldn't burn these things." So, I got the idea of giving it to a publisher in New York that I had met. (Premiere)---

Can you talk about some of your other interests such as poetry?

Well, I basically started doing that because I had a lot of free time on my hands. You know I was divorced. When you are in this industry, you spend an awful lot of time alone in motels and trains and airplanes. Strange places and you tend to look around and you spend a lot of time noticing a lot people and things people do and I started writing it down. I started jotting things down. I wasn't much of a reader, but I liked Ernest Hemingway and I liked John Steinbeck. I read a couple of biographies of Spencer Tracy and Clark Gable and Burt Lancaster, and I really just started writing stuff. I would think of stuff and I would write it on a matchbook or f*cking napkin or a paper bag. I wrote one on my leg in the back of a taxi cab in New York 'cause I didn't have a piece of paper. When you think of something, you write it down or you're gonna forget it.

BMH: One of your poems mentioned you always seeing the saddest side of things. Can you give us an example of one of the saddest moments in your life? Happiness is too easy. You could just say, “The birth of my son, Max.” What is true sorrow?
MADSEN: I'd rather keep that to myself until I can put it in writing. I haven't written the saddest poem, nor have I written about the saddest thing that ever happened to me.

Rave on michael madsen, and many of us will hang on every image, every turn of a phrase, every thought or half thought. Thank you for being someone unorthodox, someone who can hurt Quentin Tarantino's feelings one minute, and be his shining star the next.

I had no idea Madden has this within him. Tough but sensitive, honorable and forlorn - also so much honesty/integrity in his writing.