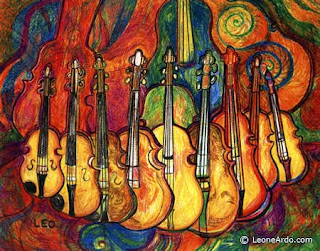 Eureka, the concerto is completed, and the performance is upcoming. Perhaps Doug will make a more formal announcement as to the venue. The performance will be in the University District, Seattle, on Friday night January 25th. He posted the 18 minutes of wonderous music on his master blog, FEEL FREE TO LAUGH today. Check it out. I did.

Now as to YOUR long awaited, often referenced VIOLIN CONCERTO, I think it might be your best work yet. It really pleased me to be able to hear it, knowing that I will not probably feel up to the drive north on the 25th, after 4 hours of sitting with an IV in my arm. Your three mpg's seem to add up to about 18 minutes of music. Is that about how long the whole piece would be in person? There are several other instruments on the track. How will you solve that when the piece is played in concert with just the two violinists?

I call your concerto:

Moving along the rushing river, skimming its muscular waves as it carves rocks, and bellows its way through hundred foot high cliffs; stone that it beat down and slashed out of its way over the millennium; cliffs of rainbow rock, sandstone and granite. You and I are winging along the corridors, spiraling on the updrafts, fighting against the downdrafts. You are the hawk and I am the crow. Listen, above the sound of the water, and the groan of granite, can you hear that? Something is calling us, something forlorn and far off, a coyote, a wolf, a canine pack of street corner warblers and growlers. So we rise up, flapping hard to catch the crest of a thermal, blasting us out of a canon past the red-yellow rock toward the ribbon of the sky above.

The wind caresses our tailfeathers as we sweep out of the canyon and behold the vastness of the desert plateau, punctuated with monoliths, red-brown in the morning light, neath an electric blue sky, dotted with popcorn white cactus clouds, arms of mist stretching out thin and long, the air pregnant with sorghum and sage and alkaline, and we wing together high, high up into a hot thermal, to get a big picture, the wide shot of the southwestern tableau, and we barely hear brother coyote, his mournful howls beat down by the thunder of thousands of moccasined feet, lost in a yellow cloud a mile distant, gray-blue and shimmering in the late morning. We fly toward it, attracted by the rolling thunder beneath clearish skies, and then we realize--that there are human legs, leather breeches, loincloths, buffalo robes, skin wraps, wool blankets, eagle feathers, and Winchesters all populating the dust; Apaches, a band of them, rag tag, faces white from the dust, white with black eyes piercing through, straining to see ahead, to possible sanctuary, their white masks looking odd, like zombies, like shuffling Noh players in some kind of traditional dance, dance of flight, and the thick dust is also full of horses, dappled, spotted, short, strong mustangs, paints, and Appolosas, and dogs of every kind and color, yipping in response to the gray ghost brothers who slink along parallel, looking for scraps and stranglers. And yo-hey, what a day, because out in front is a magnificent white tall stallion, its long tail and mane throbbing and whipping in the wind, and astride is a short muscular dark warrior in a pure white shirt, loin cloth, black bear moccasins, a buffalo skin vest, and mule deer leather britches, wearing a red bandanda around his black short-cropped shoulder length hair. God in heaven, it's Geronimo, on the run.

Two miles behind Geroniomo's tribe, his band on the run, is another dust cloud, pure white alkaline, white hats, white faces, silver buckles, scabbords, and officer's swords, bushy moustaches, hard white eyes, the Seventh Cavalry, with another short warrior at the fore, leading them in pursuit. It is Custer, back from the dead, eyes dead, arrows still sticking out of his chest, thighs, back, calves, and shoulders, bristling with Sioux feathers, wood stubbles like a hair shirt, like a porquipine in a white deerskin shirt, hatless, scalped, angry, sword protruded and pointed at the sadness of the fleeing Apaches, the white scourge bearing down on the red menace, barroling down, like 400 hooves tearing at the hardpan and clay and deep arroyos, dipping, swerving, but coming on, coming on strong, ever coming on. We wing west, hawk and crow, and there is Geronimo, astride his magnificent steed, watching like a parent, as his tribe crosses the wide water, the Rio Grande, escaping to Mexico, to the Sierra Madre, to the thorn bushes and dark skinned brothers of the soil; and the tribe forded, swum, paddled, thrashed the water, horses whinnying, with children clinging to their tails in the fast rapids, babies held high as mothers did side strokes, warriors all straining to look at their back trail, to see if Custer would bring his ghost riders, his bloody gang of white spectres down upon them, clutching their spears, bows, and rifles; ready, at the ready, forced to be ready. The last to enter the water, to make the last crossing was Geronimo himself. He did not look back. He was not afraid of white ghosts or white bullets. His medicine was strong. His people were safe, for now.

Man, that Doug Palmer can put some visualizations into his compostions. He is out there now, even giving some loving competition to supercomposer Alex Shapiro.
Glenn
Posted by Glenn Buttkus at 7:53 AM

Ummmm It's the violin duet that will be performed at Good Shepard at 50th and Sunnyside next Friday the 25th, not the concerto.
The concerto needs about 8000 bucks worth more musicians.