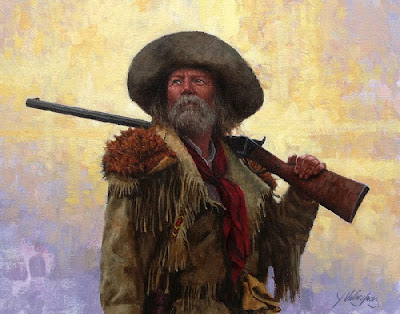 “Death most resembles a prophet who is without honor in
his own land, or a poet who is a stranger among his people.”
--Khalil Gibran

1(wide high-angle shot) the white buffalo standing center frame,
with Blackthorne glimmering in the background.
2(sound cue) female saloon performer singing a sad ballad, with
plinky-plink piano accompaniment.
3(camera pans partially to the right) we can barely make out  a
lone rider in the distance, silhouetted against the shimmering heat
waves.
4(sound cue) acoustic guitar slow base chords.
5(hold shot on the rider for a 3-count)
6(cut to a helicopter wide shot) opening up until the buffalo is on the left,
the lone rider is on the right, & Blackthorne occupies the center of frame.
7(sound cue) guitar joined by harmonica & perky violin.
8(camera, without a cut, begins a slow zoom toward the town)
and when we no longer see the bison or the stranger,
9(zoom-shot picks up speed toward the town, down to a low level
POV, over the top of sagebrush, with) Blackthorne racing up
to meet our eye, to salve our curiosity.
10(Traveling shot steadily speeds up, continues right down Main Street,
all the way through the six blocks of buildings) two saloons, general store,
barber shop, post office, sheriff’s office, cattlemen’s association, doctor’s
house, small school with a picket fence around its yard--busy street clogged
with pedestrians, freight wagons, a couple in a fancy carriage out for a
romantic ride, ranch hands loading supplies & barbed wire, a pair of painted
whores hanging out on saloon steps, children chasing a cat, and an Indian
riding a tall paint horse leading three freshly-broken mustangs headed toward
the cattle pens & corrals at the end of the street.
11(sound cues) dogs barking, player piano rolling out a tune, several random
pistol gun shots, shattered glass, rough laughter, hoarse yelling, various horse’s
hooves, a train whistle, and one small distant scream.
12(jump-cut to medium close-up) the ivory bison with its shaggy head back,
blasting one bellow, a trumpeting.
13(fade out, then back in--medium wide shot) a Western street with three loafers
slouched on puncheon benches in front of the China Doll Saloon.
14(sound cue) banjo picking.
15(dolly in to fill frame with the three men) slowly panning their lethargic
unshaven faces.
16(sound cue) flies buzzing, laughter spilling out of the saloon.
17(pull back, revealing) part of a dusty street, two horse railings,
a deep water trough.
18(three-shot) two of the men wore battered straw hats, a portly
man & a beanpole. One of the men was bare-headed, with shoulder-
length long matted curly hair, and a dark beard that was skunk-
streaked on one side.
19the hatless man stood up, & squinted into the sun, covering his
eyes with the dirty sleeve of his red plaid cotton shirt.
20(one-shot, medium close-up) the fat man wore tattered bibbed
overalls, hitched-up with a wide worn leather belt.
21(fat man): what put a cockroach in your pants?
22(three-shot) the mutt & jeff sized loafers rose up to their feet, and
joined into the staring. The fat man yawned & stretched his arms over
his head. The beanpole scratched his butt.
23(sound cue) sibilant flatulence.
24(cut to reverse three-shot) we see the backs of all three men staring
in unison toward the edge of town.
25(sound cue) acoustic guitar fast-strumming.
26(close-up) the hatless man spits a large dark wad of tobacco juice.
27(cut to the spit) arcing over the water trough & into the deep dust
on the street.
28(close up) hatless man: Rider coming.

oo nice tension in that fast strumming...all of them looking out and waiting for who is coming....ha, i like the fat man's cockroach talk as well....good piece sir....

ah you paint the scene well again... i can almost feel the tobacco juice spit on my footsoles...ha..goodness... why do men always have to spit..? smiles

I've been reading Blackthorne, Glenn. Script-writing looks interesting to a guy who fills his ten lbs of work with 15 lbs of imagery.

Glen, I love your cinema-shot-scripts pieces. They are so vivid and yet still allows the mind to conjure the scene for itself.>KB

You demonstrate so much skill in the script-writing format of this poem. I grew up with the Western Mountain man mindset, thanks to my grandfather. I think I read "Men to Match My Mountains" before I was big enough to hold it. This is so well done, Glenn. You know how to take so many eras of history an give them life for us.

again, a really vivid read. One can see every action taking place. I liked how you described the three men looking at a distance from where the rider is coming. The spitting of tobacco, close-up at it... perfect picture!
I am loving this screenplay(if I may call it so!?)

A lot of great imagery. Love how you blur between poetry and screenplay.

I feel like I just watched the scene. So good!

What an intriguing scene you have created here, Glenn! My grandpa & I always watch westerns together. This brought me to a good place, thanks.

Amazing script writing skills, Glenn! You forte in all of your recent postings! The 3 men sure are engrossed looking out. But the tobacco spitting gets the attention! Great write Glenn!

I feel like I am reading a screenplay here.

Powerful writing you got sir.

It reminds me of an old western movie from the 50's.

Amazing the detail that goes into filming; each angle, each little nuance. I had to go back and read the first two scenes. For some reason when I think "Western," I always envision Clint Eastwood circa The Good, the Bad and the Ugly days, or even up to "Pale Rider." To me, he is always the quintessential lone man!